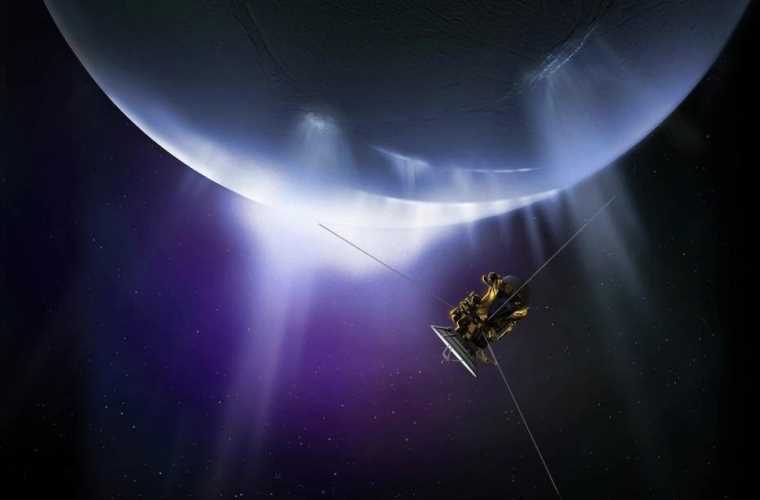 A new plan for finding extraterrestrial life on Saturn’s icy moon Enceladus has been devised by a team of researchers who says present-day technology can be used to construct an orbital spacecraft for future missions.

Previous studies have confirmed that Enceladus has an icy shell with a liquid water ocean underneath. Still, ideas that involve drilling through the ice to look for life in that ocean are decades away at best.

Enceladus Among Most Promising Targets for Finding Alien Life

Astronomers and Astrobiologists have often debated where are the best places to search for signs of alien life, but virtually all agree that Enceladus is among the most promising targets in our own solar system. Numerous rovers have found enough evidence of Mars’ watery past to postulate that life may have taken hold there at some point in the distant past. But only a few researchers believe that life could have survived the 2 billion years of arid conditions to be still alive today.

More recently, those who hunt for signs of life beyond Earth have increasingly turned their attention to the moons orbiting Saturn and Jupiter. Specifically, Jupiter’s moon Ganymede and Saturn’s moon Enceladus have stoked hopes of finding microscopic life forms in the oceans beneath their surface, where tectonic activity may create enough heat for the most extreme forms of life found on Earth to live and thrive.

Now, a team from the University of Arizona says they believe that a mission to Enceladus could answer the question once and for all.

When NASA’s Cassini mission snapped pictures of Enceladus while circling Saturn’s orbit between 2005 and 2017, one of the most shocking finds was that the planet wasn’t the ball of ice as previously believed but instead hid a vast, warm saltwater ocean beneath its frozen surface. Even more incredible were the images of dozens of plumes rising through cracks in that surface, thrusting huge amounts of that subsurface ocean into space. And to top it all off, the plumes contained large amounts of methane; a gas often associate with living organisms here on Earth.

Published in The Planetary Science Journal, the University of Arizona team has outlined how a probe could fly through those plumes and gather enough data to determine whether or not the subsurface ocean indeed supports life.

“Clearly, sending a robot crawling through ice cracks and deep-diving down to the seafloor would not be easy,” explained Régis Ferrière, senior author of the new paper and associate professor in the UArizona Department of Ecology and Evolutionary Biology, in a press release announcing the research. However, Ferrière said, gathering data from the plumes should be enough to answer the question without the technological challenges of drilling into ice over 800 million miles away.

“By simulating the data that a more prepared and advanced orbiting spacecraft would gather from just the plumes alone, our team has now shown that this approach would be enough to confidently determine whether or not there is life within Enceladus’ ocean without actually having to probe the depths of the moon,” he said. “This is a thrilling perspective.”

“Our research shows that if a biosphere is present in Enceladus’ ocean, signs of its existence could be picked up in plume material without the need to land or drill,” said Affholder, “but such a mission would require an orbiter to fly through the plume multiple times to collect lots of oceanic material.”

The researchers are quick to point out that their simulations show there is likely a very small amount of living organisms on Enceladus, if at all, and that the odds of capturing actual cellular matter of these life forms in a few sweeps of a space plume would probably be unlikely.

“We were surprised to find that the hypothetical abundance of cells would only amount to the biomass of one single whale in Enceladus’ global ocean,” said Affholder. “Enceladus’ biosphere may be very sparse.”

“The possibility that actual cells could be found might be slim,” he added, “because they would have to survive the outgassing process carrying them through the plumes from the deep ocean to the vacuum of space – quite a journey for a tiny cell.”

However, Affholder explained, an orbital probe should still be able to gather enough data on organic material to determine if the existence of methane or other bio-signs are natural in origin or if they are the product of active biology.

“Our models indicate that {the ocean biosphere] would be productive enough to feed the plumes with just enough organic molecules or cells to be picked up by instruments onboard a future spacecraft.”

Plus, the researchers explain, even if no actual cells were found, their model doesn’t rely on finding actual microbes but instead is looking for biosignature organic molecules in high enough concentrations that they are almost certainly the product of living organisms.

“Rather than focusing on the question of how much is enough to prove that life is there,” Ferrière said, “we asked, ‘What is the maximum amount of organic material that could be present in the absence of life?'”

How Soon Before a Probe Looks for Alien Life in the Plumes of Enceladus?

The researchers note that the Johns Hopkins Applied Physics Laboratory has laid out plans for an ‘Enceladus Orbilander,’ which would land on the icy surface and then drill into the ocean to look for life. Unfortunately, mission planners project the viability of such an undertaking places it sometime in the 2050s.

There are some ideas on the drawing board of NASA to send the type of probe outlined by the UArizona research team, but none of those plans have been elevated to mission status, meaning there is no definitive date set for implementation. Like most NASA endeavors, money will make the ultimate decision.

The researchers also caution that even a mission launched tomorrow may not find enough organic material to make an irrefutable case for life, only that the instrumentation and technology exist to give this type of mission a try.

“The definitive evidence of living cells caught on an alien world may remain elusive for generations,” said Afffolder. “Until then, the fact that we can’t rule out life’s existence on Enceladus is probably the best we can do.”