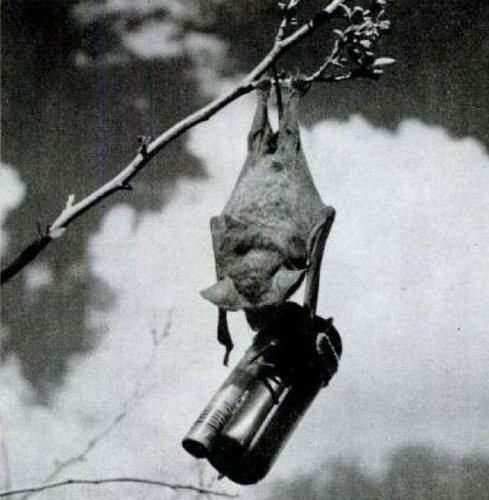 January 1942, the United States, one month removed from the Japanese attack on Pearl Harbor, mobilized as a collective for full-scale war. In Irwin, Pennsylvania, dental surgeon Lytle S. Adams is thinking about the brewing conflict. And, having just vacationed in Carlsbad Caverns, New Mexico, he’s thinking about bats. Impressed with the winged creatures–and concerned with the Japanese–a bizarre idea occurs to Adams. “Couldn’t those millions of bats be fitted with incendiary bombs and dropped from planes? What could be more devastating than such a firebomb attack.” Adams writes a letter to the White House.

“Dear Mr. President,” Adams wrote, “I attach hereto a proposal designed to frighten, demoralize, and excite the prejudices of the people of the Japanese Empire.” The proposal, specifically: A bomb filled with thousands of hibernating bats. Each bat outfitted with an incendiary device on a delayed timer. The bat-filled bomb would be dropped over enemy territory. A parachute would arrest the bomb’s descent, and the bats would be released mid-air. Dispersing, the bats would roost in enemy homes and barns and attics and stores and factories. Then, the bat’s incendiary devices would ignite, causing thousands of fires simultaneously. Calculating that millions of the nocturnal mammals could be deployed, Adams called his idea “practical, inexpensive, and effective.” The letter continued, calling the bat “the lowest form of animal life.” While “reasons for its creation have remained unexplained,” Adams believed that bats were created “by God to await this hour to play their part in the scheme of free human existence, and to frustrate any attempt of those who dare desecrate our way of life.”

A letter like this wouldn’t get very far in the contemporary White House. But in 1942, the US was scrambling to implement clever war-fighting tactics. A bat bomb was no more outlandish than some of the other projects that would gain funding, like pigeon-guided missiles, for example. And the letter writer, Lytle S. Adams, actually had some credibility. In addition to his dental work, Adams was a part-time inventor. In the ’30s, he developed an airmail system that allowed a plane to drop off and pick up mail without landing. Adams had even given First Lady Eleanor Roosevelt a personal demonstration of his airmail system, taking her on a flight. Adam’s airmail system indeed worked–and was implemented for about ten years.

So, when Adams wrote to the White House proposing a bat bomb, the letter got further than one might expect: Adams’ letter landed on President Franklin Roosevelt’s desk.

“This man is not a nut,” President Roosevelt wrote about Adams, “it sounds like a perfectly wild idea but is worth looking into.” Bat researcher Donald Griffin (who would later become a renowned psychologist) agreed, writing “this proposal seems bizarre and visionary at first glance, but extensive experience with experimental biology convinces the writer that if executed competently it would have every chance of success.”

The US Army Air Force gave Adams’ bat bomb the green light to “determine the feasibility of using bats to carry small incendiary bombs into enemy targets.” The endeavor would come to be known as Project X-Ray.

Adams assembled an oddball team and began working to create the world’s first bat bomb–a technical challenge. “The bats would need to be chilled to force them into hibernation while they were transported by airplane to the target area, then awakened just in time to swoop down into the enemy cities before their time-triggered bombs detonated, Allan T. Duffin writes for Warfare History Network, “basic questions begged for answers: How far? How fast? How cold? And what kind of miniature bomb would fit on a bat.” But first, Adams’ team would need a bat. And an incendiary device.

Several species of bat were tested for the project. The mastiff bat, impressively strong with its 20-inch wingspan, could haul a one-pound stick of dynamite, yet, the species was rare. The ubiquitous mule-eared bat, capable of carrying three ounces, was also considered, but naturalists were concerned over the species lack of hardiness. Ultimately, the project settled on the Mexican free-tailed bat, a Texas and New Mexico species, with a presumed population of 50 to 100 million. “Thousands of bats were captured with nets at caverns around the southwest,” Alexis C. Madrigal writes in The Atlantic.

With the bat selected and captured, the team considered incendiary devices. Initially, the project was using white phosphorus. But white phosphorus was highly volatile–igniting the moment it was exposed to oxygen and burning (white) hot. Project X-Ray’s chemist, the renowned Louis Fieser, believed he had a viable alternative–a brand new, top-secret incendiary agent he had created in a covert lab at Harvard University: napalm.

Napalm, which would later earn notoriety for widespread use during the Vietnam War, is an incendiary mixture of two parts: a gelling agent (a substance that can change the viscosity of an agent without changing the agent’s properties) and a volatile petrochemical (i.e. gasoline or diesel). Whereas pure gasoline blooms into a fireball and burns out with relative haste, napalm burns more slowly and allows for deployment in a solid stream of fire. And napalm–with its gelling agent– could “stick” to targets. Tested for the first time on a football field near Harvard Business School, napalm proved devastating–even today, eighty years later, the US, China, and Russia maintain large stockpiles of napalm-based weapons.

Fieser led the switch from white phosphorus to napalm. He created a napalm-filled cellulose capsule called the H-2, which “was little, about as big as my forefinger to the second joint,” Project X-Ray high school student assistant Jack Couffer recalled. The 15 to 18-gram H-2 payload would be attached to the 15-gram Mexican free-tailed bats–who had proven capable of carrying three times their body weight. But how would the team attach the H-2 to the bats?

Technicians experimented with attaching the H-2 “to the loose skin on the bat’s chest by a surgical clip and a piece of string,” C.V. Glines writes in Air Force Magazine. “After experimenting with different options, the team settled on a simple tactic: an adhesive was used to glue the incendiaries to the bats’ breast,” Duffin writes.

The bat carrying bomb was simple, too: a five-foot-long sheet metal tube. Each tube carried 1,040 bats in 26 round trays. The Army loaded “what we called the ‘armed bats’ into the bomb carrier, which was like putting eggs into an egg crate and closing it up,” Couffer remembers. Dropped from a bomber, the bat bomb would fall to 4,000 feet altitude before deploying its parachute. As the bat bomb fluttered to Earth, the sides would open, allowing the bats to escape and disperse. With the tech and procedures in place, Fieser wrote a report estimating that “while standard incendiaries might produce up to 400 ground fires on a single mission, bat bombs could ignite nearly 4,800–a 12-fold increase in destructive power,” Duffin writes. Project X-Ray was ready for testing.

Testing new military technology is often more complicated than expected–especially when live animals are integral to the new tech. Understandably, Project X-Ray’s testing phase did not go entirely as planned. At Muroc Lake, California, a simulation involving 6,000 bats underwhelmed when “some of the bats failed to wake from hibernation and simply fell to earth; others chose to fly away into the sunset, never to be seen again,” Duffin writes.

In one mishap, at the Carlsbad Army Airfield in New Mexico, “armed” bats were accidentally released. The bats roosted under a fuel tank, incinerating the test range (and one General’s car). Frustrated, the Army passed the project along to the Navy, who delegated it to the Marine Corps.

After a few more tweaks, the USMC conducted the bat bomb’s most realistic test run. Dropped from bombers on a Japanese city mockup at the Dugway Proving Grounds in Utah, the bat bombs impressed.

Dugway’s chief of incendiary testing reported: “A reasonable number of destructive fires can be started in spite of the extremely small size of the units. The main advantage of the units would seem to be their placement within the enemy structures without the knowledge of the householder or fire watchers, thus allowing the fire to establish itself before being discovered.” Similarly, the National Defense Research Committee observed at Dugway noted: “It was concluded that X-Ray is an effective weapon.” The Chief Chemist on hand for the test was convinced that the bat bomb was more effective than existing incendiary bombs: “Expressed in another way, the regular bombs would give probably 167 to 400 fires per bomb load where X-Ray would give 3,625 to 4,748 fires.

U.S. Intel Community Is Looking To Expand Its Understanding of “Cyberpsychological” Warfare

But development was taking too long. When Fleet Admiral Ernest J. King learned the bat bomb would not be combat-ready until mid-1945, he canceled all future tests. Rather than invest more time and resources into the bat bomb ($2 million, around $19.3 million in today’s money, had already been invested), US forces sought a weapon that could quickly end the war. Their focus shifted entirely towards another secret bombing program, simultaneously underway in Los Alamos, New Mexico.

Commenting on the Los Alamos project, Adams said, “Some general I met regarding appropriations confused our secret project with another secret project that’s apparently going on somewhere. It’s the silliest nonsense you ever heard of.” The project, of course, was the atomic bomb. Couffer later recalled, “there was no point in fiddling with bats when they had something like the atomic bomb.” Adams, disappointed, felt differently.

He remained convinced his bat bombs could end the war without the apocalyptic effects of the atomic bomb. “Think of thousands of fires breaking out simultaneously over a circle of forty miles in diameter for every bomb dropped. Japan could have been devastated, yet with small loss of life.”

Incendiary bombing campaigns were eventually carried out against the Japanese mainland, using conventional, bat-free ordinance. The fire-bombings were highly effective, as Adams expected. Yet, they did inflict a significant loss of life: 100,000 Japanese civilians died during the firebombing of Tokyo in what may be the most morally dubious moment of the Allied war effort.

After the war, Adams kept inventing. He proposed a fried chicken vending machine. And he patented a synthetic grass-growing pellet meant to reseed and reforest burned-out areas. The US government backed the pellet idea. Time magazine wrote, “[Adams] looks forward to the time when his man-made-bird pellets will be used to reseed all Western rangelands every ten years.”

Yet, bat bombs were surely Adams’ most notable invention. While remarkably bizarre, the thing is, the bat bomb worked. And had the timing worked out differently, Adams’ bat bomb could have been integral to one of modern history’s most transformative moments: the capitulation of the Japanese Empire.