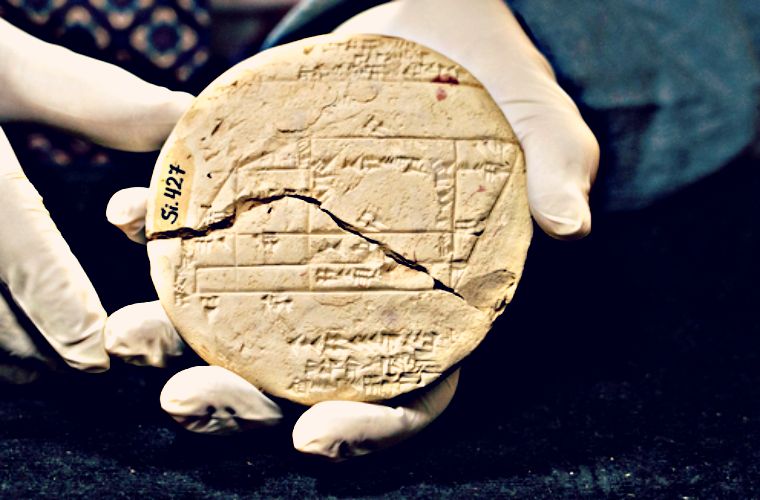 An almost 4000-year-old clay tablet displays an early form of applied geometry practiced by the ancient Babylonians, thousands of years before the math was initially thought to have been discovered.

Background: Did the Babylonians Have Geometry?

Trigonometry was largely understood to have been first discovered by the Greeks around the second century BCE. The word itself came from a combination of the Greek words for ‘earth’ and ‘measure.’

Prominent figures such as Euclid and Pythagoras created foundations and theorems that were instrumental in advancing the understanding of mathematics throughout the western world. Some of their work is still being used in current modern applications, such as Pythagoras’ theorem regarding right triangles.

While the Greeks may have had the greatest impact worldwide with their mathematical discoveries, it would eventually be revealed that they were not the first. In 2017, researchers at the University of New South Wales found a famous Babylonian tablet from 3,700 years ago, known as “Plimpton 322,” that contained a trigonometric table inscribed on it. It had sequences of numbers that are known as Pythagorean triples, despite it being thousands of years before Pythagoras lived when the tablet was used.

Analysis: The Ancients Were Math Nerds

Dr. Daniel Mansfield of the University of New South Wales, who was a part of the same team that discovered Plimpton 322 in 2017, revealed that a different clay tablet from the same time period in Babylonia contained the oldest known record of applied geometry.

The tablet, known as “Si.427,” contains mathematical and legal records of land transactions at the time. It was discovered first in 1894 in what is now the province of Baghdad in Iraq—finding it proved to be a journey in itself for Mansfield, and efforts to decipher it tacked on further months of effort.

The tablet, similar to Plimpton 322, also displays the use of Pythagorean triples to make proper right angles. Si.427’s purpose regarding land has also led to researchers hypothesizing that one of the potential reasons Babylonians were interested in these more advanced forms of mathematics was to create accurate partitions and borders of their land.

The Babylonians created their own solutions, with the boundaries displayed on several additional tablets showcasing an apparent mastery of geographical and trigonometric properties. According to Dr. Mansfield, the Pythagorean triples used on the clay tablets is especially interesting because of their variety. An easy way to create a right angle is to create a triangle with a 3-4-5 pattern, with the largest number being attributed to the hypotenuse. The Babylonians used several different Pythagorean triples to accomplish the same goal, despite their numeric system making it particularly difficult and overall limiting in which triples can be created.

Outlook: Ancient Math and ITs Impact on the Future

From a historical perspective, the implications of these discoveries are relatively clear. The Babylonians possessed a significant understanding of geometry and trigonometry before it was even a thought in the minds of their alleged progenitors.

When it comes to Dr. Mansfield, his next move is to figure out the full extent of applications that ancient Babylonians used, what he refers to as, “proto-trigonometry” for. In addition to the information displayed on the front, Si.427’s backside contains a uniquely puzzling mystery that Mansfield hopes to soon crack. In large writing on the back of the tablet are the numbers: 25:29, written in this sexagesimal format. No one currently knows what these numbers mean, or even what they could potentially be referring to or measuring. However, Mansfield has stated he would like to work with other historians and mathematicians to develop theories as to what they may be.