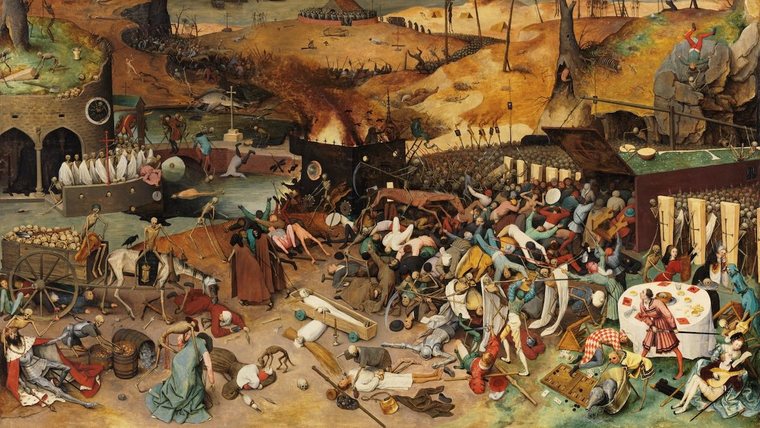 As the world continues to fight Covid-19, the simple fact of the matter is that humanity has been down the pandemic road before, and if history is any teacher, we will go down this road again. A new study reveals that plagues that hit Europe in the 14th century, had spread much farther than previously thought, with new genetic evidence of the Yersinia pestis infection found in the remains of two men in Southern Italy.

While the Black Death wiped out roughly 60% of the European population, new evidence like this gives scientists better insight into how pandemics and plagues function.

Given that we’re still learning from the plagues that came before, here are three more we should pay attention to.

The fall of the Roman Empire could be traced back to this one plague, the Antonine Plague, which was essentially smallpox.

Victims of the plague endured fever, chills, and diarrhea that turned from red to black over the course of a week, as well as developing black pox all over their bodies that left gruesome scars.

“Like some beast,” one Roman wrote, the sickness “destroyed not just a few people but rampaged across whole cities and destroyed them.”

Rome’s first smallpox epidemic originated from the east and was brought back by returning armies and tradespeople. Symptoms showed up two weeks after people contracted the disease. And while the physical symptoms—truly too heinous to be repeated—harmed many, the psychological effects were reportedly more “profound.”

The plague sent waves of fear through Roman cities; archaeologists working today still find amulets and tiny stones, devices to ward off pestilence, all over the territory. More people turned towards the god of Apollo, erecting statues in his honor and sending delegations to seek his advice.

There’s also much to be learned from how Roman Emperor Marcus Aurelius handled the plague. When the deaths of soldiers left gaping holes in the army, Marcus recruited slaves and gladiators to the legion. When farmsteads and cities seemed too empty, he invited migrants from outside the empire to populate these abandoned places.

The Antonine Plague was a deadly and disgusting affair, but what history remembers best from this event was nothing caused by the virus itself, but rather the response of the people who fought the disease and won.

“A pestilence,” historian Procopius wrote of the Plague of Justinian, “by which the whole human race was near to being annihilated.”

A cousin and precursor to the Black Death, this bubonic plague killed as many as 5,000 people per day and cleared up to a quarter of the Eastern Mediterranean population. Symptoms include fever, chills, abdominal pain (the classics), as well as delusions, nightmares, and the occasional coma.

Like the Black Death, the Plague of Justinian arrived in the form of infected fleas on the backs of rodents. Though the Mediterranean regions faced the brunt of the disease’s deadly force, cases also popped up in England, Germany, and other northern areas.

Perhaps the most notable thing about this plague—so much so that it’s in its very name!— is the way Byzantine emperor Justinian handled it. As infectious and soul-sucking as the disease was, it was only made worse by Justinian’s abysmal handling of the crisis.

His response to the alarming number of deaths? Raising taxes! If such a thing had happened now, there would surely be a riot.

Justinian also continued to wage wars against the Goths in Italy and the Vandals in Carthage, even as the number of his soldiers dwindled. He was persistent that his construction projects, like the famed Hagia Sophia, come to completion.

By choosing to ignore the destruction of the plague, Emperor Justinian oversaw the death of nearly 25% of the population throughout the Byzantine empire.

Perhaps the most famous of plagues, the Black Death, is a historical event that still haunts us to this very day.

New research shows the first genetic evidence that the plague was in Southern Italy, in the remains of two men, aged between 30 and 45 years.

“The retrieval of plague ancient DNA from the teeth of two adults buried at the Abbey of San Leonardo in Siponto is a discovery of national importance, as it is the first related to the second plague pandemic (Black Death) in Southern Italy,” said Dr. Donato Raele from the Istituto Zooprofilattico Sperimentale of Puglia and Basilicata in Foggia.

Although cases of the Black Death are reported in several historical documents, no burial sites have undergone DNA testing for the plague in Southern Italy.

For Dr. Raele, the new study results can help reveal the magnitude of the plague throughout Italy.  “We haven’t yet fully figured out the extent of pandemic waves during the Black Death in the south of Italy. The DNA of Y. pestis is about 300 years older than the previous one linked to a mass grave dating back to the late 1600s and reported by our researchers in Foggia,” he said.

As terrifying as the Black Death sounds—after all, it is the mother of 80% of the strains that circulate the world today—it’s actually not that special. It’s more or less what can be found circulating in squirrels in the Grand Canyon.

Yet, no one fears another outbreak of the bubonic plague. Of course, human behavior has changed dramatically since medieval times (shoutout to indoor plumbing!), but we have another surprising species to thank: the brown rat.

Some historians speculate that the arrival of the brown rat drove away the black rat that carried the plague. Brown rats live in sewage and in the ground, unlike black rats that lived on roofs where humans stored food.

In an interview with The Atlantic, Johannes Krause, a German biochemist, said, “It’s ironic, almost, that people, when they see rats today, they think about the plague and ‘How horrible.’ But maybe that rat that you see today, like in New York in the subway, is actually the one that saved us from the plague.”

As plagues come and go, they leave survivors with a heightened awareness of their own mortality. But they also leave something for our future generations: a lesson on how to collectively deal with the catastrophe. Some leaders power through the worst of times keeping in mind their communities, and others raise taxes and ignore it altogether. When future historians look back at our current COVID pandemic, what will they think?