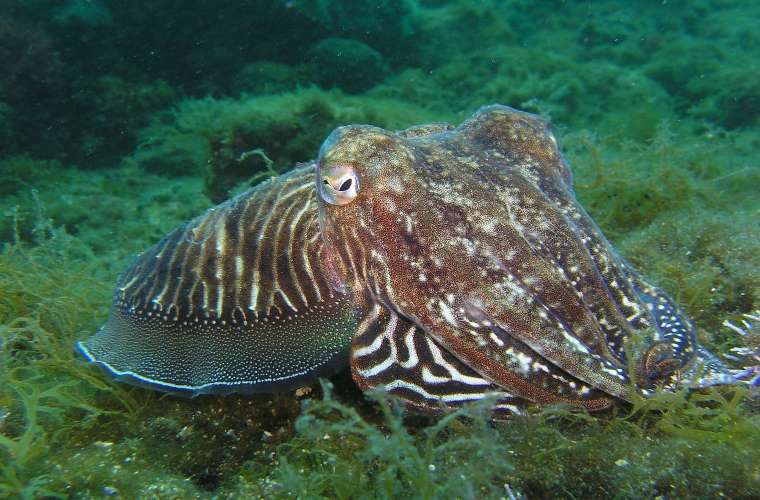 Panspermia involves the idea that life on Earth originated elsewhere, and was seeded on our planet long ago. Of course, very little direct evidence has been put forth in support of this hypothesis, although a fair amount of circumstantial evidence makes the theory worthy of consideration.

For instance, a paper from 2018 proposed that panspermia is real, and that along with viruses and other microscopic forms of life, fully fertilized eggs of cephalopods may have taken an interstellar ride over millions of years before landing on Earth, accounting for the unique features seen in these creatures today.

“In our view the totality of the multifactorial data and critical analyses assembled by Fred Hoyle, Chandra Wickramasinghe and their many colleagues since the 1960s leads to a very plausible conclusion – life may have been seeded here on Earth by life-bearing comets as soon as conditions on Earth allowed it to flourish (about or just before 4.1 Billion years ago),” reads a portion of the abstract of the 2018 paper.

Furthermore, the paper says, “living organisms such as space-resistant and space-hardy bacteria, viruses, more complex eukaryotic cells, fertilised ova and seeds have been continuously delivered ever since to Earth so being one important driver of further terrestrial evolution which has resulted in considerable genetic diversity and which has led to the emergence of mankind.”

Mixed in with the wording about “space-hardy” bacteria, eukaryotic cells and viruses is the idea of “fertilized eggs and seeds.” In essence, they propose that cephalopods are the results of this type of panspermia, which has evolved to the squids and octopuses seen on earth today.

ANALYSIS: SQUIDS AND OCTOPUSES MAY HAVE COME FROM SPACE

This idea is supported by a few key points. First, the researchers note the complex neurological systems of cephalopods, which seem too complex for their evolutionary time period. Second, the paper’s authors comment on these animals’ ability to camouflage themselves, and finally, the authors point out cephalopods’ inordinately sophisticated eyes. All of these features seem absent in the evolutionary tree of these animals, the paper’s authors note, and instead seem to have appeared virtually overnight, in evolutionary terms.

“We are acutely aware that mainstream thinking on the origin and further evolution of life on Earth is anchored firmly in the “Terrestrial” paradigm,” the paper concedes. “Our aim here is to facilitate further discussion in the biophysical, biomedical and evolutionary science communities to the quite different H-W “Cosmic” origins viewpoint which better handles, in our opinion, a wider range of physical, astrophysical, biological and biophysical facts often quite inexplicable, if not contradictory, under the dominant Terrestrial neo-Darwinian paradigm.”

The panspermia theory seems to more adequately explain some of these issues, including the idea that DNA and RNA evolved too quickly to have come from a natural evolutionary process here on Earth.

In an analysis of this theory, Cosmos writer Stephen Fleischfeller said, “the researchers suggest that abiogenesis did not happen on Earth and the main source of genetic novelty is not caused by the selection of naturally occurring advantageous mutations, but rather comes from a rain of extra-terrestrial living matter that integrates itself, via neo-Lamarckian mechanisms such as horizontal gene transfer, into the genomes of terrestrial life.”

In that same Cosmos analysis, one of the paper’s authors Dr. Wickramasinghe says, “the consistency with panspermia of a vast swathe of new data, often entailing new and unexpected developments of technology, over the past four decades have given us the confidence to adopt this tone.”

“Our point of view is that in the context of an interconnected cosmic biosphere involving at least 100 billion habitable exoplanets in our galaxy alone,” the paper adds, “and with continuing exchanges of biomaterial, large scale HGT including exchanges of complex genetic packages in the form of viruses, seeds, bacteria is unavoidable.”

OUTLOOK: SQUIDS FROM SPACE MAY BE the “MOST PROBABLE” CHOICE

More studies will need to be conducted to see if the theory is true, or if the traditional model for life evolving on earth is accurate. However, Steele and colleagues say that the current model is “deeply unlikely,” and “it is many orders of magnitude more likely that it [life] emerged in one of the trillions of comet-like incubators or water-bearing planets (cosmic-wide versions of Darwin’s ‘warm little ponds’) at a very early time in the growth of this universe.”

“The choice between life originating on Earth against manifestly insuperable odds, and an origin in the connected volume of a large part of the almost infinite universe is a simple binary choice,” concludes Wickramasinghe. “We chose the most probable.”

Wait. Does this mean that squidding and alien-hunting are the same things?