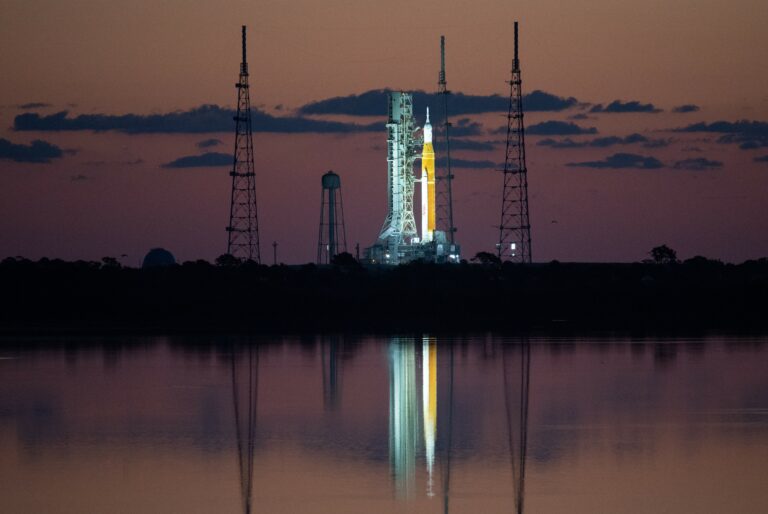 Artemis-I: NASA Has Its Eyes on the Moon as it Preps For Future Mars Missions

NASA’s Artemis-I mission has set a trio of possible dates for the space agency’s first official launch to the Moon in 50 years. The first possible launch window arrives on August 29, only six weeks away, with the second and third windows opening on September 2 and September 5. The first stage in an effort to return humans to the Moon and ultimately Mars, this Artemis mission launch represents the first of many “small steps” toward achieving those goals.

In a July 20 conference call with the media, NASA officials Jim Free, Mike Sarafin, and Cliff Lanham offered a number of details about Artemis-I’s maiden voyage.

“We have placeholders on the range for August 29, September 2, and September 5,” said Free, associate administrator, Exploration Systems Development Mission Directorate, NASA Headquarters in Washington. “We will make the agency commitment at the flight readiness review, just a little over a week before launch, but these are the dates that the team is working to.”

The August 29 and September 2 windows are about 2 hours each, with the September 5 window lasting about 90 minutes. The NASA officials also explained that a launch in August would lead to an October 10 splash down in the Pacific Ocean, while the subsequent September dates would end in a similar fashion on October 11 or October 17, respectively.

“We have a cut-out for eclipse from August 30 through September 1,” said Sarafin, Artemis mission manager, NASA Headquarters, explaining the small gap in the launch windows. “That’s a three-day period where due to the Sun and Earth alignment while Orion is headed outbound on the trajectory, it will be unable to produce power because the spacecraft would be in the shadow of the Earth.”

Whichever date the mission launches, it will race into space aboard NASA’s brand new, still untested Space Launch System (SLS) rocket. 15% more powerful than the biggest Apollo-era rockets, the SLS will carry its European Service Module and Orion spacecraft across over 200,000 miles of virtually empty space before entering the Moon’s orbit. At its closest, the capsule and flight module will get to within 62 miles of the lunar surface.

“Since arriving at the Vehicle Assembly Building back on July 2, our teams have been pressing ahead to prepare the SLS rocket and Orion spacecraft for the Artemis-1 launch,” explained Lanham, senior vehicle operations manager Exploration Ground Systems Program. “That included repairing the source of a hydrogen leak that engineers identified during the last wet dress rehearsal.”

Tests and Evaluations of Key Systems

Although a significant ceremonial step almost 50 years to the day since the last Apollo mission flew, the Artemis-I mission has a number of tests and objectives they hope to complete during the three-week trip.

“Validating Orion’s heat shield is our primary objective—it’s a critical activity that we see is necessary before we fly crew on Orion on the very next mission [Artemis-2],” said Sarafin. “When Orion returns from the Moon, it will be traveling at about 24,500 miles an hour or Mach 32, and it will experience temperatures as hot as the Sun outside the heat shield.”

Instead of human crewmembers, this pioneering flight will carry three mannequins. Named “Helga,” “Zohar” and “Moonikin Campos,” the trio is designed to collect radiation levels and other data throughout the duration of the flight.

Mission specialists will also be evaluating the performance of the spacecraft’s solar panels, its durability when passing through areas of high radiation, and the navigation system. The team will also see how some recent repairs that were made to the spacecraft, including the significant hydrogen leak noted by Lanham that caused a major delay, hold up under real-world launch conditions.

ONE SMALL STEP FOR ARTEMIS-I

“Today’s anniversary is a good reminder of what a privilege it is to be a part of a mission like this,” said Sarafin. “It’s not just the Artemis-1 mission. It’s the bigger picture of returning to the Moon and preparing to go to Mars, which we try not to lose sight of in our day-to-day work.”

All three NASA members cautioned that delays and new dates are always part of the process in their business, and even these three dates are not set in stone. However, all also sounded optimistic they would more likely than not get Artemis into space on one of the selected dates.

“We think we’re on a good path to get to [launch] attempts on those days,” said Free.

The experienced NASA administrator also noted that astronauts often tell their families coming to see the launch that they should simply plan a whole week of vacation in south Florida, and if they’re lucky, they “might see a launch in there too.”

Sarafin was a little more optimistic, exclaiming, “Launch day is going to be here before we know it!”