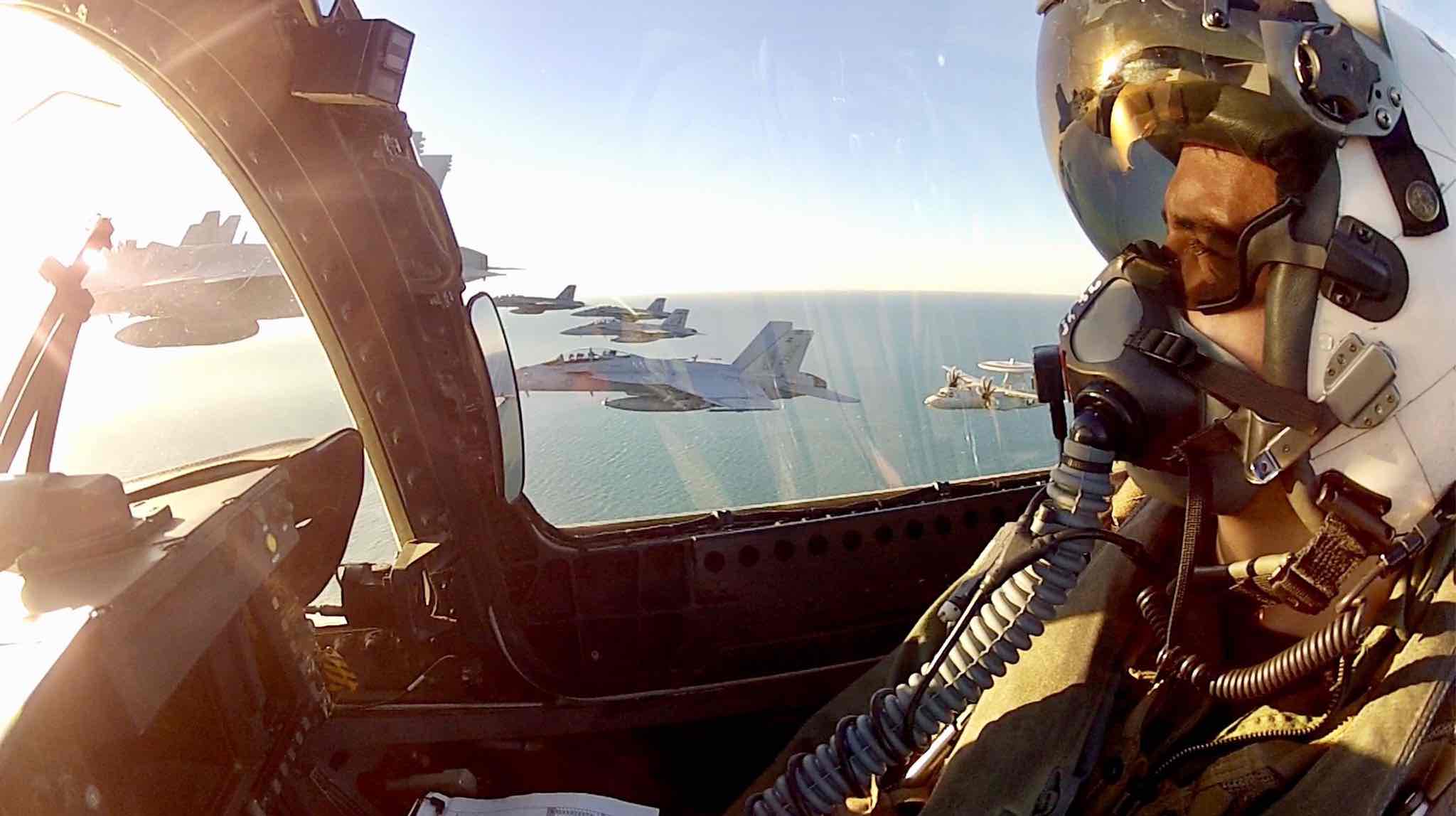 As a Former Fighter Pilot Who Encountered UAP, We Need Science—Not Stigmas and Conspiracies—to Solve This Mystery

Ryan Graves·
FeaturesOpinionUAP
·December 31, 2022
Ryan Graves is a former Navy fighter pilot and Chair of the American Institute of Aeronautics and Astronautics (AIAA) UAP Integration & Outreach Committee (UAPIOC). The following commentary is in response to a series of recent Op-Eds published in the Wall Street Journal by columnist Holman Jenkins, who named Ryan directly in his October critique. The author’s opinions expressed here are his own and do not necessarily reflect those of The Debrief.

A MAJOR BARRIER to our understanding of Unidentified Anomalous Phenomena (UAP) is not just government secrecy: it’s stigma.

Conspiracy theories like those perpetuated by Holman Jenkins in his recent Wall Street Journal columns, under titles like “UFO ‘Mystery’ Shouldn’t Drag On,” “The UFO Bubble Goes Pop,” and, most recently (and perhaps his most unhinged), “The UFO Crowd Wants an Alien Invasion for Christmas,” only help breed the stigma that hinders the very kind of scientific approaches he agrees are needed to resolve the UAP mystery.

Jenkins offers the idea that maybe a secret military laser program is being tested on active-duty pilots in midflight, deceiving them—and their infrared and radar sensors—into observing UAP by “creating plasma bubbles in the air.” Jenkins also says the DoD “may know exactly what they are” when the Department’s own UAP report to Congress says they do not. He has even gone so far as to say that recent momentum on this issue is due to “intelligence officials who think their job includes promoting false and tendentious information to the American public for their own purposes,” without offering any idea as to what those purposes might be, then accuses advocates of believing that “aliens are a Jesus stand-in.”

This kind of cynical speculation gives rise to the stigma that has long surrounded UAP. Not only does it have a chilling effect on military and commercial pilots coming forward, but it also discourages scientists from pursuing funding to study these phenomena.

I know firsthand that the fear of this stigma is a major issue because I was the first active-duty pilot to come forward publicly about regular sightings of UAP, and it was not easy. I have seen mysterious targets on radar myself and have spoken with pilots who have experienced near misses with mysterious objects off the Eastern Seaboard, which prompted unsafe evasive actions and mandatory safety reports. I spoke out about these incidents publicly in 2019—at great risk both to me personally, and to my profession—because nothing was being done.

Today, I chair the American Institute of Aeronautics and Astronautics (AIAA) UAP Integration & Outreach Committee (UAPIOC), a new permanent committee within the aerospace industry to study UAP and educate government, academia, and industry on the associated risks to aerospace safety. At the AIAA, I stand with the other military and civilian pilots who have come forward at risk to their own careers to say that UAP represents an aerospace safety issue that deserves serious study.

I believe it is a disservice to the public good to disparage or attempt to undermine the eyewitness testimony of these highly trained aviators who have come forward. Worse still, unsubstantiated commentary on UAP potentially undermines national security, aviation safety, and common sense. Ignoring the issue or advancing theories without facts is not acceptable.

Here are the facts: It is undisputed that there are cases involving UAP where sufficient data was collected from multiple trained witnesses and state-of-the-art sensor systems, and yet the UAP still could not be explained.

The unclassified, preliminary assessment on UAP provided by the Office of the Director of National Intelligence (ODNI) to the U.S. Congress on June 25th, 2021, states that most incidents remain unidentified, and that “UAP clearly pose a safety of flight issue and may pose a challenge to U.S. national security.” The report even includes the extraordinary statement that some unidentified UAP incidents might suggest our scientific knowledge is inadequate and may require advances before they can be resolved. Public statements from numerous elected officials and intelligence leaders who have access to the DoD’s classified UAP report or other classified data suggest that UAP incidents cannot be explained and require our respect and commitment to further research.

NASA Administrator Bill Nelson, who read the classified DoD UAP report and was briefed by Navy pilots while serving on the Senate Armed Services Committee (SASC), agrees UAP deserves further study. “I’ve talked to those pilots and they know they saw something, and their radars locked on to it,” Nelson recently said. “And they don’t know what it is. And we don’t know what it is.” There is a reason why Nelson approved the NASA UAP Independent Study Team: it is clear he believes the scientific study of UAP is worthwhile.

President Obama, Senators Romney, Rubio, Gillibrand, and Heinrich, Directors of National Intelligence (DNI) Avril Haines and John Ratcliffe, and former CIA Director John Brennan are among the long list of leaders who also have had access to classified data, and agree that these phenomena exist and that we do not know what they are.

Congress is also taking aerospace safety issues related to UAP seriously. President Biden just signed the 2023 NDAA with far-reaching UAP provisions into law including 1) having AARO report directly to DoD leadership, 2) an audit of government involvement in UAP since 1945, 3) establishing a UAP whistleblower program that waives all public and private non-disclosure agreements, and 4) directing AARO to develop a collection and science plan.

The NASA UAP Study: A New Calculation On the Fly

Additionally, recent Congressional hearings in the Counterterrorism, Counterintelligence and Counterproliferation (C3) Subcommittee of the U.S. House Permanent Select Committee on Intelligence highlighted significant flight safety incidents involving UAP. In his testimony, Deputy Director of Naval Intelligence Scott Bray stated that there were 11 near misses reported by military aviators under the new reporting system.

UAP-related safety incidents continue to affect both military and commercial aviators. The Federal Aviation Agency (FAA) recently issued an alert to its operation managers that a commercial aircraft over West Virginia experienced a double Attitude Reference System failure and double autopilot failure while passing beneath a UAP, as confirmed through a recent FOIA disclosure.

Encounters with these phenomena are not an issue exclusive to Americans, either. Similar incidents have been reported by the Canadian military and commercial pilots, and countries like France have maintained dedicated UAP study programs for decades.

New momentum is driving scientific research into UAP. It does not matter whether these are incidents involving Chinese drones, or something else we simply don’t yet understand: UAP deserves our attention as a matter of aerospace safety and national security. We need to rigorously apply the scientific method in our investigations of UAP and respect that process. Witnesses, scientists, and military and commercial pilots need to provide and analyze the data that we now have available.

Most of all, we should not contribute to the stigma that has historically impeded scientific UAP research and hindered efforts to obtain funding for it. Let’s stop with the speculation, set aside the stigma, and make the investment in science to get the data required to answer these critical questions.