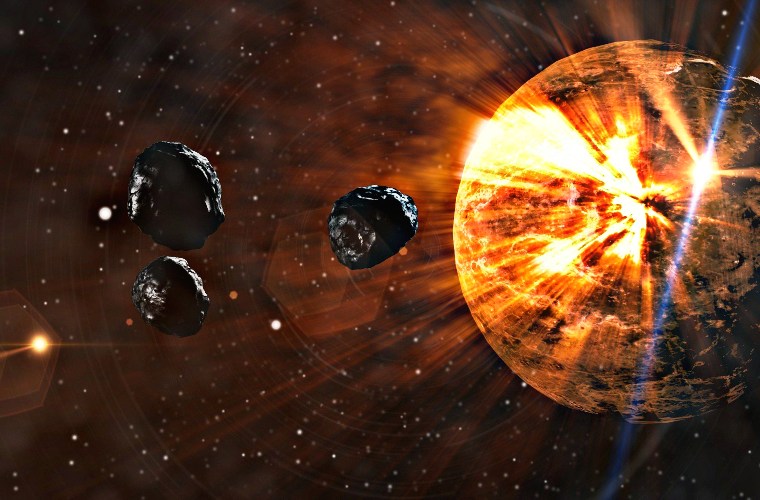 Yep, We Can Weaponize an Asteroid


With a bit of planning, time, and a giant amount of money, we could theoretically hurl space rocks into anything.

With the recent launch of NASA’s Double Asteroid Redirection Test (DART), which will attempt to alter the course of an asteroid, the idea of Earth being struck by a giant space rock is scary as hell. It doesn’t help that countless science fiction films and shows have also toyed with this idea. So with asteroids slamming into Earth in mind, and season 6 of The Expanse about to drop, The Debrief has one question…

The Subtle Art of Weaponizing Asteroids on TV

The 5th season of The Expanse series shocked everyone when Inaros, a major villain in the plot, found a way to redirect and control asteroids to attack Earth. Using stealth technology, the bad guys managed to keep the accelerated asteroids undetected until they reached Earth, successfully weaponizing them.

The Expanse is a sci-fi series in which the solar system has been entirely colonized. There, humanity splits into three main factions: The United Nations of Earth and Luna; Mars, the independent planet; and the Outer Planets Alliance (OPA) that inhabits the space near the asteroid belt and the moons between Jupiter and Saturn.

Earth and Mars are constantly at odds; however, one thing they have in common is the exploitation of “the Belters” of the OPA, the miners that quarry asteroids for vital resources but are kept in poverty, while the prices for air and water keep rising. In a classic “eat the rich” revolution, this oppression triggers a sense of rebellion in the OPA’s terrorist groups, which ultimately leads to the massive asteroid attack on Earth. Millions die, and, for Earth, it’s a rough day.

Can we weaponize an asteroid in Real Life?

To understand how an asteroid could be weaponized, we need to know exactly what they are and how they work.

When our solar system was forming, a giant cloud of gas and dust collapsed. The material in the center of the cloud formed the Sun, some of the condensing dust became planets, and some of the leftovers became asteroids. Most of them can be found in the main asteroid belt (between Mars and Jupiter), but others are located in the orbital path of planets.

No two asteroids are alike. They were all formed at different distances from the Sun and at various locations, and they also vary in shape, size, and composition. Sometimes we hear or read on the news that an asteroid is coming towards Earth, but there’s usually never a reason to panic because they either burn up in the atmosphere or are simply too far away to collide with our planet.

How exactly could an asteroid be transformed into a weapon? Is it even possible? Humanity has acquired extreme amounts of technical skill over the years, and our knowledge is ever-evolving, so perhaps the idea of having the ability to move asteroids around and making them rain on a planet is not that far-fetched.

Thomas Bania, a professor of Astronomy at Boston University, believes that it is possible to weaponize an asteroid, at least in principle. To get there, we would need a way to land on the asteroid, install some sort of propulsion system, and then redirect the asteroid’s orbit so that it hits the intended target on Earth.

A potentially feasible way to achieve this would be to use the technology behind the “mass driver” invented by Princeton physicist Gerard O’Neill. A mass driver is an electromagnetic accelerator that uses linear motors to accelerate and catapult objects in space without using a rocket.

In 1976, O’Neill designed the Mass Driver 1 to demonstrate the concept of the mass driver, which could also be configured as a rocket motor, using space materials for reaction mass and solar power for energy. Since then, a few other prototype mass drivers have been built, but we’re not yet able to make a mass driver on the scale needed to weaponize an asteroid.

“This is a slow-speed weapon. It would take many months to change the asteroid’s orbit, and the journey to Earth would also take months. The defenders would have ample warning to mount a counterstrike to take out the asteroid,” Bania told The Debrief.

Martin Connors, a planetary astrophysicist at Canada’s Athabasca University, also thinks that “weaponizing an asteroid, or for that matter, an object in orbit around Earth, is in principle. possible.”

The devastating effects of asteroid (and asteroid-like) bodies entering the atmosphere have already been demonstrated.

“Two impacts over Siberia, one the Tunguska event of 1908, and the Chelyabinsk meteor of 2013 illustrate this. The first released about 10 Megaton energy equivalent, like a hydrogen bomb, and blew down a huge, virtually uninhabited forest area in Siberia. The second was a much smaller event but passed over a city doing extensive but nonfatal damage,” Connors told The Debrief.

The high speed of these objects results in high levels of energy that can be delivered to a target to destroy it without using explosives. We’d still get an energy release comparable to an atomic weapon but without radioactive fallout.

“In the ‘Star Wars’ development era of US defense/offense, aspects of the use of orbiting energy were considered in ‘kinetic kill.’ All this means is that if you impact something at very high speed, you don’t need any explosive to blow things up,” Connors said. “There was an attack strategy for ground targets called ‘Rods from God.’ In this, heavy, heat-resistant metal rods would have been caused to come down on ground targets. However, it is hard to get them through the atmosphere intact and accurately hit a target.”

Successfully weaponizing an asteroid, though, would be a hard thing to accomplish. Finding appropriate asteroids to weaponize, moving them around quickly, and aiming them accurately is something that would require years and years of planning.

“The precision with which this would all have to be done would make the prospect very difficult. The optimum strategy might be to get relatively small asteroid bits (say 10m across) and put them in high Earth orbit. An arsenal of these waiting for use might have deterrent capability,” Connors says. In other words, if your enemy knows you can rain down tons of small asteroids on them, they may play nice with you.

We Need to Get An Asteroid First…

Before even thinking about the different ways how an asteroid could be weaponized, we would need to come up with a way to land on the boulders successfully.

Can Kinetic Launch Send Satellites to Space without Bulky Rockets?

The idea of colonizing asteroids has been around for a while as a possibility for humanity’s survival outside of Earth and an economic incentive associated with asteroid mining.

However, this process faces immense challenges that must be overcome, like the transportation distance (the asteroid belt is pretty far from Earth), lack of gravity, freezing temperatures, radiation, and more.

Asteroids aren’t big enough to produce a lot of gravity, making it difficult for a spacecraft to land. Although no human spacecraft has ever landed on an asteroid in the belt, there have been some landings on closer asteroids.

After a year of orbiting the asteroid 433 Eros, in February 2001, the Near-Earth Asteroid Rendezvous (NEAR) spacecraft made a controlled descent to its surface for the first time in history. NEAR was never meant to land but to orbit around an asteroid, collecting pictures and data. It survived the landing and cut off communications two weeks later, never lifting off from the asteroid again.

Last year, the OSIRIS-Rex spacecraft briefly touched down on an asteroid before taking off again. This “landing” is a bit different from the one that occurred in 2001. This spacecraft was meant to land on the asteroid, but only for enough time to collect some material samples from the surface. If everything goes smoothly, the OSIRIS will return to Earth in 2023.

The Final Verdict: Can We Turn Asteroids into Weapons?

Considering everything, would it be possible to weaponize an asteroid? In theory, yes, it would, but we’re very far from achieving it in practical terms.

An asteroid would be a very effective and devastating weapon, but there are a lot of logistical issues to solve before we get to it.

So while The Expanse’s Marco Inaros may have figured out how to chuck massive space rocks and successfully deal a significant blow to the “Earthers,” it would be an enormous logistical nightmare that only a psychopathic “Belter” extremist could accomplish. With that all being said, outside of science fiction, it’s possible.