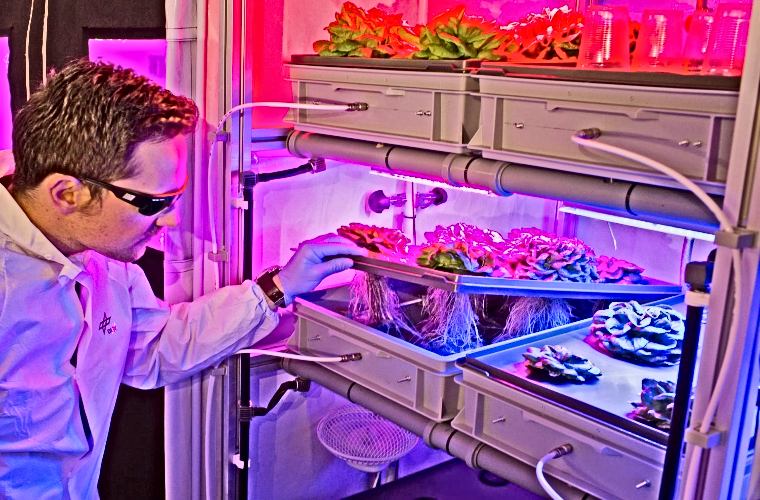 Not every planet is as hospitable and conducive to life as our own. Still, researchers in Antarctica are having great success experimenting with ways to efficiently grow plant life with artificial light and developing ways to do so autonomously, marking a significant step towards the future of growing food in space and on other worlds.

Getting food into space has proved an obstacle since the idea to go beyond our biosphere first became a scientific priority. A typical supply shipment to the ISS costs around $10,000 per pound, and sometimes even more, making it difficult to supply and costly.

Moreover, it is obvious that for an interplanetary mission, such as the ever tantalizing human settlement of Mars, this strategy would be impossible- and due to Mars’ lack of a habitable atmosphere, it would need to be indoors.

In addition to the Aero and Space that they are named after, NASA has made extreme contributions to farming as a whole. For example, farms nationwide rely heavily on self-driving tractors to work their fields, some of which continue to use NASA technology to this day and utilize satellite images to assess the status and health of their produce.

Most important for space agriculture, however, is the development of LED lighting systems to stimulate plant growth without the use of sunlight. While used in greenhouses all over, these systems are integral to the goal of farming off-world. According to NASA, these LED systems can be tailored to any specific plant at any stage of development, effectively eliminating photosynthetic obstacles.

The EDEN-ISS, a mobile greenhouse in Antarctica operated by the German Aerospace Center (DLR), has already seen success using a more advanced version of NASA’s LED system, with parameters that can be scripted to create the ideal blend of LED nutrients to its plants. The Antarctic itself acts as a good preparation site for potential extraterrestrial endeavors, given its own set of extremely harsh environmental conditions. The most significant issue with the current greenhouse system comes in its cost of human effort, effort that could and probably should be spent on more critical tasks should this occur outside the safety of Earth. Operations need to be simplified and, ideally, autonomous.

Currently, the DLR is developing several systems to remove the human element from this artificial agriculture. One comes in the form of software that can monitor plants’ stressors by observing their shifts in light absorption through a camera. Another is a mounted and mobile robotic arm that performs the most labor-intensive tasks autonomously. It would harvest the plants, remove dead leaves, and take photographs that could potentially be used to monitor the garden. Ideally, the system becomes completely autonomous; however, it is even more likely to operate entirely remotely from Earth.

These agricultural developments do not apply exclusively to space either. The use of the modern vertical farming system is becoming more and more common. Finding ways to improve agricultural efficiency and reduce the margin for error benefits those who remain terrestrial just as much, if not more so. Vertical farming systems, in particular, allow for farms to exist almost anywhere, as they save precious resources and offer the ability to meticulously control the environment and nutrition to ensure perfect plant growth. The EDEN-ISS even used such a system during its early trial runs.

Outlook: Can We Grow Plants on Mars?

The DLR’s roadmap for future developments is promising and comprehensive. In addition to Astro-agricultural endeavors, they are working on various systems and software to handle tasks like biological waste management, robotics, microbiology, and life support systems.

For the folks who don’t plan on leaving Earth anytime soon, they plan on researching and developing terrestrial applications alongside everything else. Should the schedule be maintained, by the beginning of the next decade, their biological life support systems for off-world habitats will be ready for construction, as well as prototypes for incorporating advanced agricultural systems into urban environments. The recent experiments and trials done in the Antarctic have been highly successful thus far. They seem to promise that we are looking at the alpha versions of what could potentially be the software that allows us to extend our civilization to the great beyond permanently.