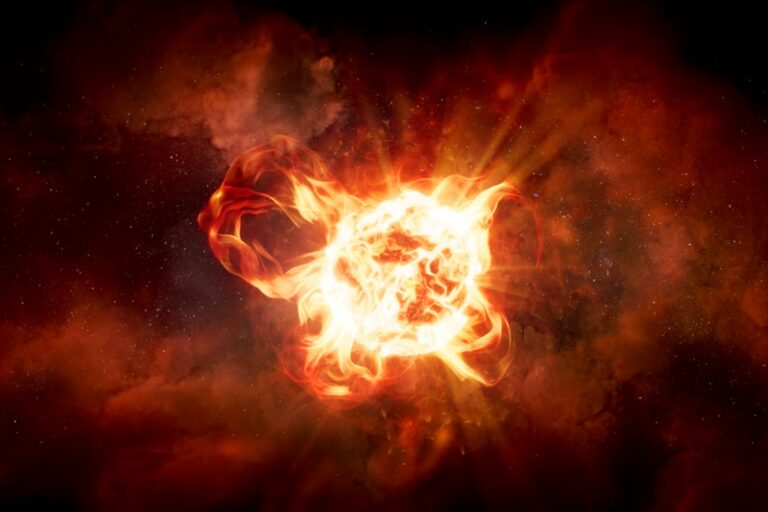 Betelgeuse Mystery May Be Solved with Help from a Stellar “Monster”

As one of the brightest stars in the constellation of Orion, as well as one of the ten brightest stars in the entire night sky, Betelgeuse has captured the eye of stargazers for centuries. Notable both for its brightness, and its distinctive coloration, accounts of the its reddish appearance date as far back as of the early Greek astronomer Ptolemy, who by the 2ndcentury had described it in terms of what later translators called “ruddy.”

More recently, Betelgeuse has captured the attention of astronomers not for its coloration, but instead its dramatic dimming in brightness over a period of several weeks last year. As perplexing as its sudden dimming, the red supergiant star subsequently resumed its brightness. The reason for this unusual stellar display was a mystery, and opinions about its cause remained divided.

Now, astronomers have observed similar behavior in a much younger “monster” star nearby, which offers clues about the mysterious dimming of Betelgeuse that has perplexed observers since 2019.

Wish Upon a Supergiant

VY Canis Majoris, or VY CMa, a highly oxygenated red supergiant which derives its name from its host constellation of Canis Major, is possibly among the largest stars known to exist. It is also one of the brightest red supergiants and ranks among the most luminous in all of the Milky Way.

According to a new study led by astrophysicist Roberta Humphreys with the University of Minnesota, Minneapolis, the peculiar dimming of what NASA calls the “monster star” VY Canis Majoris could be likened to what Betelgeuse has done since 2019, only “on steroids.”

By January of last year, Betelgeuse had significantly diminished in brightness, reaching a record observational minimum of +1.614. Speculation ensued that the dimming might indicate that the star would soon result in a supernova, although its continuous dimming moved it from ranking among the top ten brightest stars in the night sky to being within only the top 25.

Theories Behind the Betelgeuse Mystery

Within months of the earliest observations of the phenomenon by astronomers, it was proposed that the cause of the dimming observed in Betelgeuse had been due to eruptions of gas, or possibly dust, either of which might shield the star’s brightness when observed from afar. Another interpretation suggested that the dimming was largely coincidental and might have resulted from its normal light cycle minimum, which lasts slightly less than six years, combined with other irregular factors. This interpretation had been favored by Villanova University astronomers Richard Wasatonic and Edward Guinan, as well as an amateur Thomas Calderwood, who had been the first to recognize that Betelgeuse appeared to be dimming.

However, according to the new data obtained with the help of the Hubble Spae Telescope, Humphreys and her team believe that the dimming is indeed due to gases spilling off of the planet, which may have formed layers of dusty particulate clouds that temporarily obstructed the light from Betelgeuse.

“In VY Canis Majoris we see something similar,” Professor Humphreys says, “but on a much larger scale. Massive ejections of material which correspond to its very deep fading, which is probably due to dust that temporarily blocks light from the star.”

“VY CMa may be young in comparison with the Sun, probably at most about 10 million years,” Humphreys told The Debrief in an email. “But for a massive stars which have short lives measured in millions of years instead of billions, VY CMa is an evolved star, a red supergiant, meaning it is nearing the end of its short life.”

“Betelgeuse demonstrates that these high mass surface eruptions that are so visible in VY CMa are common in red supergiants,” Humphreys told The Debrief. “VY CMa had long been considered a special case, the ‘extreme’ red supergiant.”

According to Humphreys, VY Canis Majoris may still be special, on account of the fact that it could be providing astronomers an early glimpse at the final stages of its red supergiant phase prior to entering its terminal state, where it will become increasingly bright as a supernova. The star may also collapse into a black hole thereafter.

“Observations at long wavelengths (infrared) show a lack of cold dust at distances corresponding to more than 1000-1200 years old,” Humphreys says. “So it has been in this very active, high mass losing state for a short time.”

“This could be the ‘last gasps’ of a red supergiant, before the end.”

Humphreys thinks that the processes being observed with VY Canis Majoris are far more common behavior in red supergiants, and that the star’s volatility is likely one of the most extreme examples astronomers have observed to date. She further speculates that these phenomena could be the very factors driving the loss of mass by stars like VY Canis Majoris, as well as Betelgeuse, “which has always been a bit of a mystery for red supergiants.”

Humphreys and her team’s research was published in the February 4, 2021 edition of The Astronomical Journal, and more information about the findings and NASA’s Hubble Space Telescope can be found at the space agency’s website.

Make sure to follow us on Flipboard for exclusive content and the latest news on breakthrough #science and disruptive #technology!