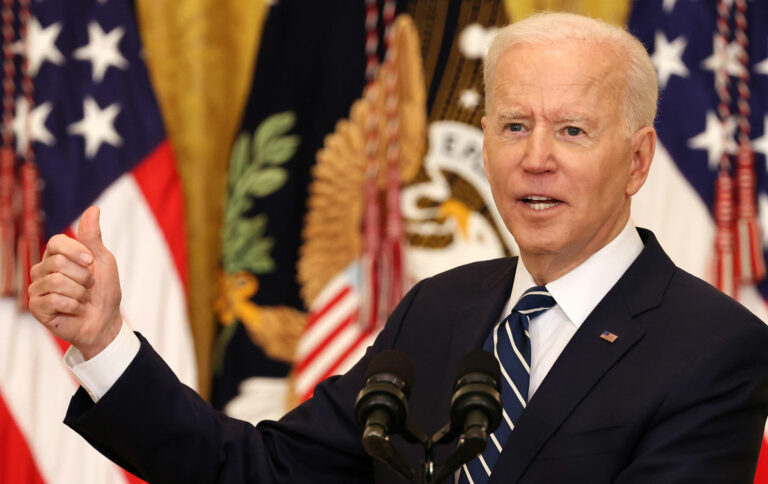 During his first press conference, U.S. President Joe Biden said his administration was planning to invest heavily in science, pledging to increase federal funding for scientific research “closer to 2%” of America’s overall GDP.

“Back in the ’60s, we used to invest a little over 2% of our entire [gross domestic product] in pure research and investments in science. Today, it’s 0.7%. I am going to change that. We are going to change that,” Biden said. “The future lies in who can, in fact, own the future as it relates to technology—in quantum computing, a whole range of things, including the medical fields. And so, what I’m going to do is make sure we invest closer to 2%.”

The President’s comments were in response to a question asked about the increasing tensions between China and the United States.

Bipartisan concerns over China’s rapid advances in science and technology have been steadily increasing in recent months. Weeks ago, the National Security Commission on Artificial Intelligence issued their final report saying the U.S. was unprepared for the coming era of artificial intelligence and cyber-competition with China.

Since taking office two months ago, Biden has already taken several actions demonstrating that science will be a priority for his presidency. A week after his inauguration, on January 27, The White House issued a memo entitled “Restoring Trust in Government Through Scientific Integrity and Evidence-Based Policymaking.”

Building on scientific integrity policies from the Obama administration and the Foundations for Evidence-Based Policymaking Act passed and implemented under President Trump, in the January memo, President Biden ordered the establishment of new Science Chief Officers for any federal agency that “funds, conducts, or oversees scientific research.”

According to the White House, the newly minted Scientific Chief Officer’s role will be to serve as lead adviser on science issues and “ensure that the agency’s research programs are scientifically and technologically well-founded and conducted with integrity.”

That work will be supported by a separate new position, the “Scientific Integrity Official,” who will report to the Chief Science Officer. The memo also gave agencies 90 days to establish scientific advisory committees to support their new top science advisors.

Before taking office, the president also announced he would elevate the White House Office of Science and Technology Policy director to a Cabinet rank within the Biden-Harris administration.

“I have always said that the Biden-Harris administration will also lead with science and truth,” Biden said in a January statement.

While bipartisan agreements are becoming increasingly rare in modern politics, it’s unlikely the President’s pledge to increase science spending will face much opposition from the other side of the aisle.

A day before the President’s press conference, Republican House lawmakers proposed the Securing American Leadership in Science and Technology Act or “SALSTA.”

Among many moves aimed at promoting innovation and security, SALSTA calls for doubling funding for basic science research over the next ten years at the Energy Department, National Science Foundation, National Institute of Standards and Technology, and National Oceanic and Atmospheric Administration. The 265-page piece of legislation also proposes the creation of a coordinated national science and technology strategy.


DARPA edges closer to its dream of having 250 AI drones for urban warfare environments.

At points during his tenure as president, Donald Trump also prioritized investment in science and technology, including his 2019 plan to usher in the “second bold era” of science and technology and in “industries of the future.” These moves, however, were marred by massive budget cuts in federal research and development spending.

“One of the reasons why I set up the President’s board of science advisors, again, is we’re going to invest in medical research, cancer, Alzheimer’s, diabetes, industries of the future, artificial intelligence, quantum computing, biotech,” Biden told the press. “We’re going to make real investments. China is out investing us by a longshot because their plan is to own that future.”

During the press conference, Biden said he had a nearly two-hour phone call with President Xi Jinping after China’s President called to congratulate him on his election victory. Biden described China’s “leader for life” as not having a “democratic -with a small ‘D’ – bone in his body.” Adding, “He’s one of the guys, like Putin, who thinks that autocracy is the wave of the future and democracy can’t function in an ever — an ever-complex world.”

Biden says he made it clear to Xi Jinping that America wasn’t looking for a confrontation with the People’s Republic of China but that “we know there will be steep steep competition.”

“Look around the world,” said President Biden. “We’re in the midst of a fourth industrial revolution of enormous consequence.”