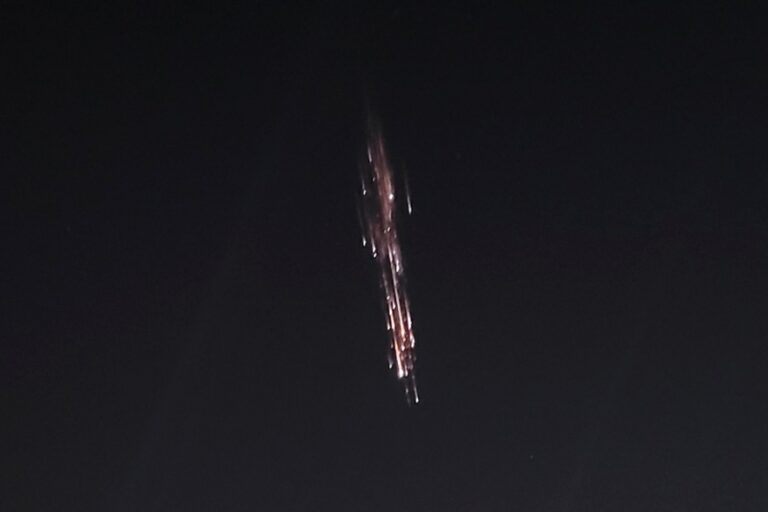 Meteor Shower? Strange Lights Over the Pacific Northwest Had Another Explanation

On Thursday night, stargazers throughout the Pacific Northwest were treated to a striking aerial display as a stream of blazing objects burned through the night sky.

The objects were seen in Oregon, Washington, and Western Canada, and were filmed by many startled observers.

“Oh my god, what am I seeing,” said Mike Sippel as he filmed the string of lights passing over his home in Portland.

“What is that?” asked Ryan Graven’s wife elsewhere, as she filmed the same aerial display on her commute home. Graven described it as being accompanied by a “crackling sound, and called it “incredible and terrifying at the same time.”

So what were the lights that had everyone in the Pacific Northwest talking? A meteor shower, or perhaps something else?

Even longer duration meteors normally do not remain visible in the sky for as long as the objects observed over parts of Oregon, Washington, and Canada on Thursday night. After numerous reports by frightened residents throughout the region, the National Weather Service confirmed that the lights had resulted from a SpaceX Falcon 9 rocket that had been launched from Kennedy Space Center earlier this month.

While we await further confirmation on the details, here’s the unofficial information we have so far. The widely reported bright objects in the sky were the debris from a Falcon 9 rocket 2nd stage that did not successfully have a deorbit burn.

Apparently, issues with the rocket’s second stage were to blame for the incident. Normally the Merlin Vacuum engine aboard the Falcon 9 deploys and aims the rocket toward a safe reentry into the Pacific Ocean. In this instance, a lack of propellant caused the Merlin engine to misfire, and after remaining aloft for 22 days, the Falcon 9 finally reentered Earth’s atmosphere where it began to break apart and burn as it coursed through the sky over the Pacific Northwest.

It is possible that some fragments of the rocket might have survived reentry and made it all the way back to Earth, where they would have likely made landfall somewhere in the Rocky Mountains.


Essay argues interstellar objects may be ‘message in a bottle.’

Fortunately, no injuries were reported as a result of the incident, although more than a few residents throughout the northwest had been shaken up by what many had mistaken for a meteor shower, if not an alien invasion.

The launch that caused the unexpected light show had been part of the SpaceX’s ongoing effort to carry its Starlink satellites into orbit, which are currently already providing satellite internet service to a number of customers. The company aims to have coverage available around most of the world by the end of the year, with complete global coverage estimated by 2022, according to SpaceX CEO Elon Musk.