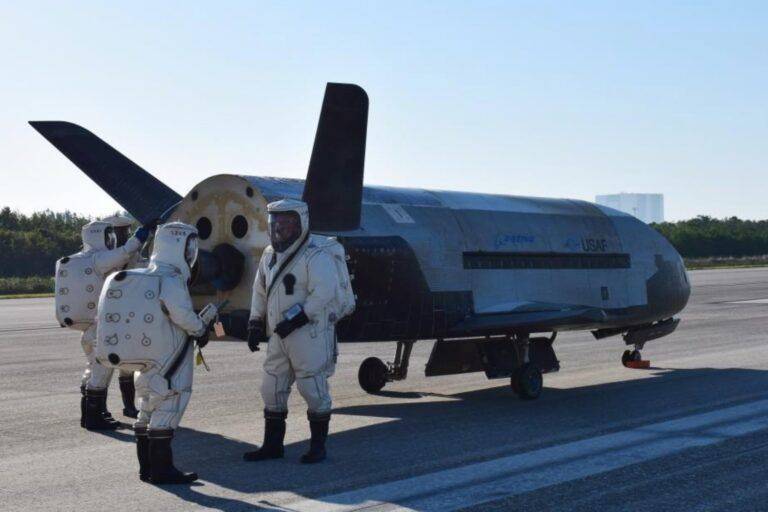 As it approaches its second anniversary spent in orbit, the current flight of the Air Force X-37B Spaceplane is now its longest in a succession of launches that began a decade ago, leaving a curious public wondering what the purpose of its mission might be.

Although one thing is absolutely certain: the X-37B is getting a lot of attention, despite being a “secret” military spacecraft.

Likened by Popular Mechanics to being “the Space Shuttle’s smaller, younger brother,” the X-37B is an Orbital Test Vehicle (OTV) which does resemble its larger sibling in many ways. Both aircraft have the same roughly bullet shape and small wings.

“That’s where the comparison ends though,” Kyle Mizokami wrote in July, noting that the X-37B is designed “to spend months in orbit, carrying out classified missions on behalf of America’s military space program.”

That’s right, America’s existing military space program. While there has been much talk of the institution of a “Space Force” in recent months, The United States has actually had a unified command that undertakes operations in space since 1985, called the United States Space Command (USSPACECOM).

So now that the military’s space plane is breaking records for spaceflight, what do we actually know about the mission of the X-37B?

Air Force spokesman Major William Russell told CNN that there is no planned date or time for completion of the X-37B’s mission, stating only that it “will return to Earth only after its completed all its objectives.”

Although the aircraft’s position has been kept secret along with its mission objectives, that doesn’t mean its location has remained entirely off the record. During past missions, the X-37B aircraft has been spotted by amateur astronomers on a number of occasions.

One tracker, Greg Roberts, told Space.com in 2015 that it stands out among other orbital objects because “It’s in a lower orbit than normal,” noting the confusion this caused among skywatchers who expected it “would be the standard operating orbit.”


First thought to be an Earthquake, the window-rattling boom was most likely a test flight of an undisclosed military aircraft.

As far as what is known about the record-breaking unmanned aircraft, the X-37B’s mission appears to include existing efforts aimed at the design of reusable spaceflight systems. Similar practices are being implemented by companies like aerospace company Rocket Lab with its Electron, a two-stage orbital expendable launch vehicle featuring Rutherford engines, recognized as the first electric-pump-fed engines in use for powering orbital rockets of any kind.

In the video below, you can see the planned recovery mechanism for the Electron:

According to CNN, “Officials don’t necessarily want to reuse the same X-37B plane multiple times, but the Air Force designed the craft to try out new navigation systems as well as methods for reentering the Earth’s atmosphere and for landing safely back on terra firma.”

The current mission of the X-37B began in September 2017, and has remained in flight for longer than 718 days, which exceeds the total flight time of its predecessor, the OTV-4.