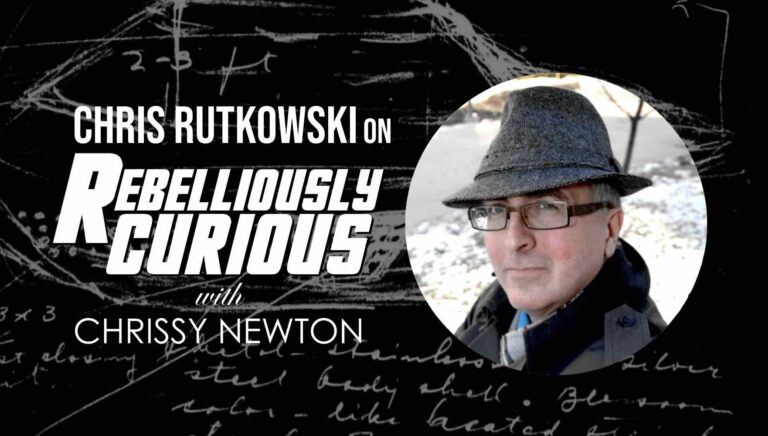 
From Pilot Encounters to Crash Retrievals, Chris Tells All

Many people throughout the decades have claimed to observe unusual things in our skies, which for some, has led them to search for answers to the great mystery of unidentified aerial phenomena. But for Canadian UFO researcher Chris Rutkowski, he says his journey began when he intercepted a call from his university’s astronomy department.

“(UFO) reports started coming into the astronomy office,” he explained. “Phone calls were coming in from people who had seen UFOs, and my (professors) weren’t really thrilled about (it); they thought it was nonsense and said ‘don’t worry about it.’ But it was interfering with their research, and they couldn’t get anything done.”

Before long, the undergraduate physics student was taking nearly all of the UFO calls the university received. He found that although he could explain most, there was a core percentage interesting enough to study them more closely. Still an undergrad, Rutkowski gave a lecture to hundreds of Canadians who were curious about UFOs. In fact, according to Chris, he had J. Allen Hynek and Stanton Friedman sleep over at his house in the late 1970s.

In a recent interview with The Debrief’s Chrissy Newton on Rebelliously Curious, Rutkowski spoke about official Canadian UFO investigations, including project Second Story and its handover in the 1960s to the National Research Council (NRC).

“It’s kind of like the Canadian equivalent of the Smithsonian,” he explains. “And the premise was it was a scientific issue, not a defense issue because following what the United States Air Force said, there doesn’t appear to be any defense or security issue regarding UFOs.”

After that switch, the NRC partnered with the nationwide Royal Canadian Mounted Police. In this arrangement, the RCMP could direct local officers to conduct initial investigations, then forward interviews and other data to the NRC for analysis. Because this cooperation ran through most of the 1990s, Rutkowski notes that Canada has a detailed history of UFO reports from the 1940s through most of the 1990s.

In discussing the end of Project Blue Book, Rutkowski reminds viewers how the first official congressional hearing in 1968 effectively led to the end of the military investigating UFOs.

“So, when people are getting excited about congressional inquiries in the United States in 2022, let’s just hope it doesn’t suffer the same fate as what happened in 1968 and shut everything down,” he warns.

Rutkowski goes on to offer a number of positive aspects of current investigations, including efforts by Canada’s equivalent of the FAA, called Transport Canada, that are still ongoing.

“So, we actually have a complete record of what’s being reported officially and investigated officially in Canada from the 1940s ‘til now!” he says with added emphasis on the last word. “Which is not what we have in the United States whatsoever.”

Rutkowski spends the next few minutes talking about how sometimes American pilots flying over Canada see UFOs and how Canada’s sharing of NORAD with the US means that these reports collected by Canadian authorities also end up with the US Defense Department. Chris says that his research and his annual analysis of official UFO reports have revealed that pilots and air traffic controllers report, on average, between 750 and 1,000 sightings in Canadian airspace every single year.

“Since we started doing the Canadian UFO Survey in the late 1980s, we have something close to 25,000 separate UFO reports in Canada, and that’s way more than Project Blue Book ever had,” he says with obvious pride. “So, the data is there. It’s just a matter of crunching it, looking at it, and doing some analysis.”

Next, Newton asks Chris about the recent activity within the Canadian parliament to discuss UFOs and what importance he feels officials should put on pilots seeing so many things they can’t explain. It is a riveting discussion, and Rutkowski makes a passionate yet reasoned case for understanding why so many pilots are seeing these things, whether it’s all a psychological phenomenon, a disturbing pattern of pilots faking reports, or even extraterrestrial visitors in Canada’s airspace.

Rutkowski also discussed UFO reports in and around nuclear sites in Canada and what security issues may need to be addressed by authorities within this set of reports. Newton and Rutkowski, both Canadians, also talk about the differences between Canadian and American attitudes regarding UFOs, specifically regarding media coverage. Surprisingly, Rutkowski says he sees more media attention in Canada than one might surmise.

At one point, Chris takes a friendly jab at Harvard Professor turned UFO hunter Avi Loeb, noting that the University of Toronto conducted a full-fledged scientific investigation of UFOs in the 1980s, and they didn’t find anything of significant scientific value.

The next phase of the discussion is equally fascinating, touching on a whole range of topics in and around Canada’s role in studying and understanding UFOs. This includes potentially partnering with the United Nations or other governments worldwide to better utilize the decades of official reports accumulated by Canadian organizations and the changes within the Canadian military that offers those in service more organized avenues to report a UFO.

Newton and Rutkowski conclude the program with a long discussion about various reports of crash retrievals and crash debris, a case of a man severely injured when coming in contact with a disc-shaped craft, and a piece of radioactive material ostensibly from a crash retrieval that Chris says he still has in his possession.

You can find Chrissy Newton’s recent interview with Rutkowski on The Debrief’s official YouTube channel, along with all of our other current and past videos, podcasts, and other content.