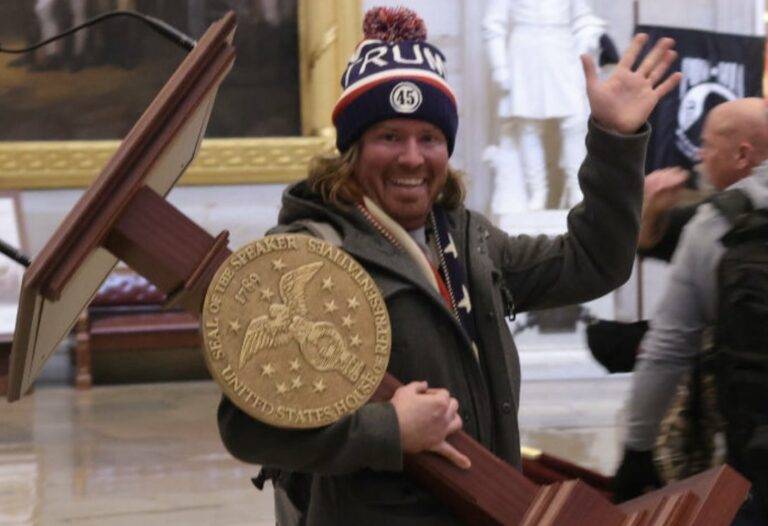 This article was updated with further information on January 7th at 3:08 PM EST.

During the riot, four individuals were killed, dozens were injured, and two pipe bombs were found in the area, which, according to local law enforcement, could have caused “great harm to public safety.”

People worldwide watched in disbelief as multiple news channels — and even the rioters themselves — broadcast the entire melee live on social media. Now, to secure as much evidence as possible before it gets deleted, researchers are scraping the internet to create an archive of evidence for this event.

BACKGROUND: archive of a riot

“Retaining visual materials around incidents is extremely important as it preserves any possible evidence for further research. When we work with conflict zones, one of the main struggles of our work is preserving visual materials that show evidence of war crimes, as social media platforms constantly remove these materials due to extremism/violence,” Aric Toler told The Debrief in an email.

On Twitter, Bellingcat called for followers to download as many images and videos as possible concerning the riots. The plan is to create an archive for law enforcement and future researchers to understand what happened and the security failures that occurred.

For those who are able to: please try to scrape and save any videos and livestreams of the Capitol storming and occupation. Just like after Charlottesville in 2017, many of those who are streaming will delete their streams once they realize how incriminating the footage is.

A Reddit thread on the r/Datahoarder subreddit also asked for users to begin archiving footage and images. The archive was moved to a MEGA file, which was scrubbed due to policy violations, however mirrors of the archive have been saved.

The Federal Bureau of Investigation is also seeking information concerning the riots.

ANALYSIS: data for accountability And To Help in Arresting Captiol Hill Rioters

“The most basic way [the video and images] could be used is by identifying the people who stormed the Capitol, particularly the most violent offenders,” Toler explained. “Researchers can draw out group affiliations to see how this took place, along with a reconstruction of how the police and security measures were so easily bypassed.”

Researchers can begin going through the different image and video files to ascertain who these individuals are and what exactly they were doing during the riot. Apart from property damage and physical injuries, the Capitol Hill rioters had access to sensitive documents and computer systems. It is unknown at this time how much of that information was compromised.

The problem is that all this evidence will begin to disappear, and it is now a race against the clock.

“We have already seen Facebook move to remove materials around the Capitol storming, possibly shifting photographs and videos that could be key in future investigations from the public domain to be lost in the digital ether,” Toler stated.

This Plastic Is Compostable and Could End ‘Forever Plastics’

According to Bellingcat, social media platforms are quick to begin removing content from their feeds because it shows depictions of violence or extremism. Hence, the content needs to be saved locally on a user’s device and uploaded to a remote file outside of a social network.

Bellingcat’s digital call to arms was followed almost immediately by a string of supporting tweets from the group on how to go about the process, including a link to an archive of similarly captured videos housed on their website from the 2017 Charlottesville incident.

The tweets by Bellingcat also noted that, in the Charlottesville case, most of the suspect videos’ posted by the perpetrators were taken down within 48 hours of the event, most likely when the passions of the moment had passed and the reality of the possible criminal nature of their actions set in.

OUTLOOK: Social media is forever and the Capitol Hill Rioters Forgot That

Social media has altered the scope of how information is handled and spread. The extremists who raided the capital building took a flurry of pictures and videos and posted them to their various social media feeds. Law enforcement and researchers online can begin using that data to lay charges for criminal activity. Moreover, that data can be used to track how the situation on the ground evolved and escalated.

The pro-Trump extremists who stormed Capitol Hill yesterday often discuss fears or espouse conspiracies of a 1984-esque surveillance state. Ironically, much of the evidence being collected by archivists comes from the rioters recording themselves.

“I think what this shows is that people can get ‘locked-in’ to their own subjective realities and echo chambers and are reluctant to assess contradictory information objectively,” Bellingcat’s Giancarlo Fiorella told The Debrief. “The QAnon mass delusion played a role in inciting what occurred yesterday.”

If individuals have images or data they wish to send to Bellingcat concerning the Capitol Hill Riot, that information can be submitted via this link.

The Debrief’s Tim McMillan aided in the reporting of this article.