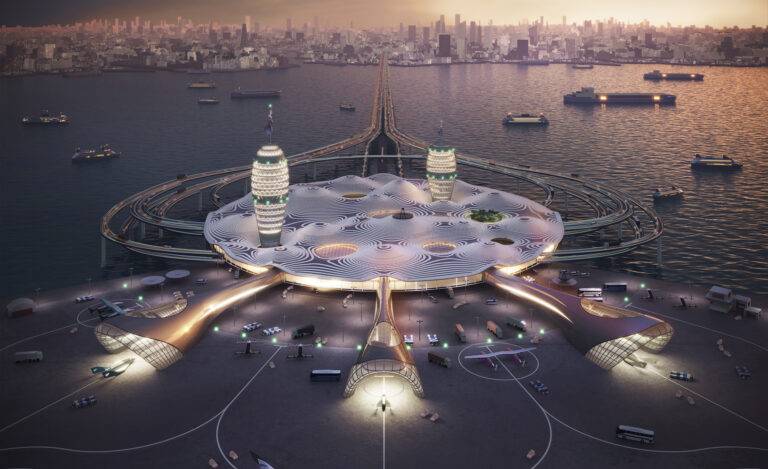 The future of vacations may come sooner than expected. As industries prepare for commercial space travel, spaceports are being planned worldwide, and Noiz Architects’ Spaceport City in Japan is the latest to bring this futuristic landscape to life. The joint venture between Noiz Architects, Space Port Japan Association (SPJ), and companies Dentsu and Canaria aims to connect traditional transportation with a commercial space shuttle operation that looks right out of the future.

BACKGROUND: What is a Spaceport?

Solar towers, cylindrical steel, and glass towers are just some of the physical aesthetics that make up the progressive, urban architecture of the spaceports in New Mexico, Colorado, Houston, New Zealand, and Sweden. According to CNN, spaceports, like airports, will offer an adventure that will include commerce, arts, entertainment, exercise, and dining facilities. Instead of airplanes, spaceplanes will be used to take passengers into the upper reaches of the atmosphere.

ANALYSIS: What will Spaceports Offer?

The day-trip destinations will help humanity become “more familiar with space,” said project manager at Noiz Architects Urszula Kuczma to CNN. Companies like Virgin Galactic and Blue Origin are developing spacecraft that would make this travel possible. Virgin Galactic currently has 600 passengers signed up at $250,000 a ticket for a potential launch next year. Space Port Japan projects this new-found portion of the space industry to grow by 40 trillion yen.

The spaceports will be utilized for commercial space trips with the opportunity to experience some zero-gravity first hand. While the first launches will only be affordable for the rich, the possibility could arise somewhere in the future to have trips like this be affordable for all; maybe we will have a Spirit or Jet Blue version of Virgin Galactic?

If Mars or other planetary colonization is also in the future, these spaceports may play a pivotal part.

Could CBD Be A Safer Alternative to Opioids?

OUTLOOK: Lifestyles of the Rich and Famous

As aerospace exploration industries pivot to look at space as a tourist destination, more architectural firms like Noiz will be designing futuristic mock-ups of slick spaceports.

While the future may see spaceports as the “next-big-thing” in vacations for the wealthy 1 percent, these celestial sojourns could give cruise ships and theme parks a run for their money. Even if this is still pretty far out into the future, it is fun to think about being a high-roller sipping a martini a few minutes before you go to space for fun.