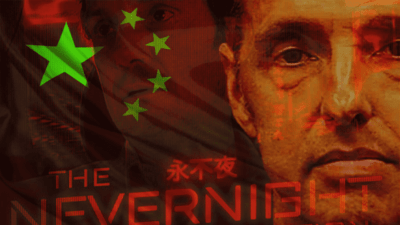 The Nevernight Connection – A ‘Candy Store’ for Espionage

In the next scene, a static video characteristic of a police car-mounted camera captures a sheriff’s deputy, gun drawn, approaching a man wearing a tank-top and gym shorts. Leading the man away in handcuffs, “We’re going to turn you over to the FBI. Understand?” the deputy says as the scene fades to black and film credits begin to roll.

This all sounds like it could be a scene from a Hollywood drama. However, these are the closing sequences of The Nevernight Connection – a short film produced by the Federal Bureau of Investigation (FBI) and the Office of the Director of National Intelligence’s counterintelligence arm, The National Counterintelligence and Security Center (NCSC).

Inspired by real events, The Nevernight Connection is a 30-minute short film following the fictional account of a former U.S. Intelligence Community official, “Daniel Landry.” The movie primarily focuses on the remarkably unlikeable Landry, who realizes while on a “business trip” to Shanghai that he’s likely provided classified information to a Chinese intelligence agent. In a series of flashback scenes, we discover Landry’s path to committing espionage began after being targeted on social media.

The Office of the Director of National Intelligence (ODNI) says they released The Nevernight Connection to the U.S. Intelligence Community last fall during “National Insider Threat Awareness Month.” The film and “other resources” were used to inform and warn government security clearance holders on social media use by Chinese Intelligence to recruit spies.

Fluent in Mandarin, Mallory worked for the Central Intelligence Agency (CIA) as a covert officer, tasked with handling sources and stealing foreign secrets, throughout the 1990s. In the early 2000s, Mallory served as a senior intelligence officer for the Defense Intelligence Agency, before returning as a CIA contractor from 2010-2012. According to the Department of Justice (DOJ), in October 2012, Mallory lost his top-secret security clearance after improperly disclosing classified information.

The details behind what cost Mallory his security clearance in 2012 are unknown. It’s assumed the improper disclosure of classified information related to carelessness, rather than maliciousness since Mallory was never criminally charged. The loss of his clearance did, however, cost Mallory his ability to work with the U.S. government. With few prospects, by 2017, the DOJ says a lack of steady employment and over $230,000 in debt made Mallory a prime target for the intelligence services of the People’s Republic of China.

Rather than being approached in a dim-lit bar by an overly friendly “honey pot,” federal prosecutors say Mallory was targeted by Chinese agents on the popular professional social networking site LinkedIn.

Passing himself off as a representative of the Shanghai Academy of Social Sciences, “Michael Yang” sent Mallory a LinkedIn message saying the think tank was looking for a foreign policy expert. According to court records, Mallory replied, “I’m open to whatever. I’ve got to – you know – pay the bills.”

Like the fictional Daniel Landry in The Nevernight Connection, federal prosecutors say Mallory began reaching out to former CIA colleagues to gain information to pass along to his new friends in Shanghai. Authorities say Mallory twice flew to China to provide foreign intelligence agents with classified documents and information. Identical to the short film’s plot, Mallory’s espionage was uncovered after former co-workers grew suspicious of his probing and contacted authorities.

The tank-top clad man carted off in handcuffs in the ending scene of The Nevernight Connection, is in fact, Kevin Mallory. The clip comes from the actual police video of his arrest. On a cellphone given to Mallory by his handlers, authorities discovered text messages between the ex-CIA officer and Chinese agents. In one particularly damning exchange, Mallory texted, “Your object is to gain information. My object is to be paid.” In all, the DOJ says China paid Mallory $25,000 for his spying efforts.

In June 2018, Mallory was found guilty by a federal jury for conspiracy to transmit national defense information to an agent of the People’s Republic of China. The following year, in May 2019, a federal judge sentenced Mallory to 20 years in prison.

As Chief of Counterintelligence at CIA headquarters in Langley, Virginia, James Olson’s primary job was preventing the disclosure of CIA secrets and catching spies like Kevin Mallory. Far from being a one-off event, Olson tells The Debrief Mallory’s case is just one example of how the Information Age has changed the game of foreign espionage.

“The Chinese intelligence services do a very scientific and thorough job of mining social media to identify recruitment targets,” explained Olson. “LinkedIn is one of their favorites. Millions of Americans seeking employment post their resumes on LinkedIn. A large number of them are former U.S. military personnel, intelligence officers, or high tech engineers. To enhance their attractiveness to potential employers, these individuals often list the government clearances they held and the projects they were involved in. This is like a candy store for the Chinese MSS [Ministry of State Security].”

According to Olson, The Nevernight Connection is a perfect example of how Chinese intelligence services typically operate. “The standard ploy is to respond under the cover of a Chinese institute, university, or think tank expressing interest in a consulting relationship, a lecture at a Chinese facility, joint research, etc. An all-expense-paid trip to China is usually offered at the front end. The invitation appears innocuous at first. Once the ‘candidate’ is in China, he or she is wined and dined, flattered, and paid a generous “consulting or speaking fee.” The Chinese then probe aggressively for information to assess how susceptible the target is to an enhanced relationship.”

A Voracious Appetite for Information and Technology

The FBI is quick to point out it isn’t just U.S. government clearance holders who are targeted for their potential to become Chinese spies.

“It’s not just current or former government employees who may be targeted. Private sector employees, academics, and researchers also are of interest to those trying to illegally obtain sensitive information,” the FBI told The Debrief in an email.

According to the Department of Justice, since 2018, 80% of all economic espionage cases charged by the DOJ involved the People’s Republic of China. In a 2014 speech at the Center for Strategic and International Studies in Washington D.C., the DOJ’s National Security Chief, John Demers, stated the responsibility for stealing American intellectual property shifted from cyber operations conducted by the People’s Liberation Army to more focused operations undertaken by China’s intelligence and security agency, the Ministry of State Security (MSS). Demers described MSS as being China’s rough equivalent to “the CIA and FBI put together.”

Last July, FBI Director Christopher Wray told attendees at a lecture at the Hudson Institute, “It’s the people of the United States who are the victims of what amounts to Chinese theft on a scale so massive that it represents one of the largest transfers of wealth in human history. If you are an American adult, it is more likely than not that China has stolen your personal data.”

Olson tells The Debrief China’s targeting of Americans via social media is hardly a haphazard operation. “The Chinese intelligence services know exactly which agencies or corporations and which specialties they are interested in. This is a wide swath, however, because the Chinese appetite for U.S. sensitive information and technology is voracious,” explained Olson. “It is not limited to penetrations of the U.S. government, but it also includes military-related technologies, industrial processes, agriculture, medicine, space, and cutting-edge research in any area that exceeds Chinese capabilities.”

“Even one successful recruitment through professional networking and social media sites can be damaging to our national security,” said The FBI.

In their email, The FBI cautioned, “Individuals who advertise their security clearance or their participation in sensitive work assignments are particularly vulnerable to an approach by criminals or a foreign intelligence service.”

Olson, who now works as a professor at Texas A&M University’s Bush School of Government & Public Service, echoes a similar sentiment of caution in social media use. “I advise the students in my intelligence classes to be judicious in what they post on social media. If they aspire to intelligence careers, too much information about them online could jeopardize their future covers and assignments.”

Keeping with modern trends, Olson hinted that games that previously would have played out in East Berlin or Brussels have likely moved into the social media arena as well. “If I were in charge of CIA counterintelligence, I would use the Chinese intelligence services’ hyper-aggressiveness in exploiting social media against them. I’d insert into LinkedIn and other sites some highly attractive resumes—and then allow the process to develop into a double agent operation,” says Olson.

For obvious reasons, it’s unlikely we’ll see a social media “spy vs. spy” plot should The FBI or ODNI decide to make a sequel to The Nevernight Connection. Nevertheless, The FBI told The Debrief they urge “Anyone who feels they may have been targeted by a foreign intelligence service or by criminals should contact the FBI at 1-800-CALL-FBI.”

Watch The Nevernight Connection Below: