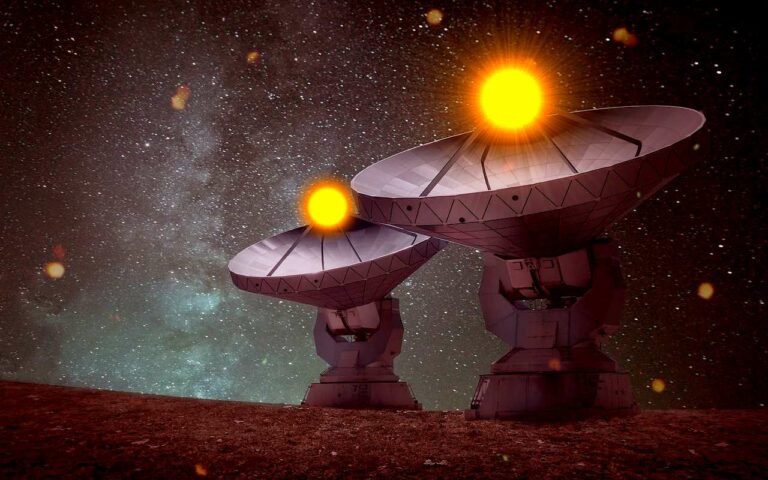 
In this inaugural installment of "Our Cosmic Neighborhood", Avi Loeb gives us perspectives on the challenges presented by any future attempts at communication with extraterrestrials.

I was recently invited to attend an interdisciplinary discussion with linguists and philosophers, coordinated by the Mind Brain Behavior Interfaculty Initiative at Harvard University. The conversation will revolve around the challenge of communicating with extraterrestrials as portrayed in the film Arrival.

The war in Ukraine illustrates how difficult it is for earthlings to communicate with each other even when they share the same planet and communication devices. Partial information about the intent of the opposing side leads to suspicions. And a one-sided ambition for domination fueled by the perception of superiority could lead to a confrontation. This dynamic is prevalent not only in international affairs but also in academia, business, and personal lives. And it might even appear in a virtual environment like the Metaverse, where the challenge of translating the experience between human languages and cultures will be met by advanced algorithms of Artificial Intelligence (AI).

But the encounter with an extraterrestrial culture could also be indirect. It is conceivable that a billion years ago, extraterrestrials on a distant exoplanet around another star decided to publicize their existence or thoughts by distributing leaflets throughout the Milky Way galaxy. In analogy to letters in the postal service mail or messages in bottles floating in the ocean, physical objects traveling through space offer the advantage of a means of communication that could survive for billions of years, longer than the lifetime of their parent stars.

The escape speed from the Milky Way is a tenth of a percent of the speed of light, about ten times faster than the chemical propulsion we used so far in spacecraft. At this speed, slower than the characteristic speeds of stars, the space leaflets would be bound by gravity to the Milky Way. And moving around our galaxy for billions of years, they might be discovered long after their senders are gone. On the other hand, electromagnetic signals travel at the speed of light and escape the galaxy in one pass, lasting only tens of thousands of years – merely a few millionths of the age of the Milky Way. And even during that limited time, they are detectable – with a delay accounting for their travel time, only for the duration of their transmission.

Interestingly, the first interstellar object, `Oumuamua, was inferred to be a flat thin object based on the variation of reflected sunlight from it as it was tumbling, as well as the excess push away from the Sun that it exhibited without a cometary tail. Perhaps `Oumuamua did not resemble known comets or asteroids because it was a thin leaflet from a past civilization.

A more advanced form of an indirect encounter with a messenger involves an AI system that is sufficiently intelligent to act autonomously based on the blueprint of its manufacturers. Since AI algorithms will be capable of addressing communication challenges among human cultures in the Multiverse, the same might hold in the actual Universe. In that case, we should be able to communicate at ease with a sufficiently advanced form of AI astronauts, because they would know how to map the content they wish to convey to our languages. With the perspective of that level of communication, the war in Ukraine would demonstrate the poor quality of human interactions, which lead repeatedly to destruction rather than cooperation.

Here’s hoping that the encounter with extraterrestrial AI will be a teaching moment to humanity and lead to a more prosperous future for us all. After all, natural selection is based on “survival of the fittest”. Those who survive the longest must have been able to understand the others around them. If not, they could have confronted the risk of suffering losses in conflicts with one final blow terminating their existence. The key to longevity is pursuing one’s goals without risking one’s existence. And there is no better tool for the latter task than exceptional communication skills.

Our language is limited by our imagination. It is therefore important to stay open-minded to a reality that we never imagined, as a means for enriching our vocabulary. Cave dwellers would not find it easy to communicate the new experiences they encounter on a first visit to the current New York City, partly because the gadgets they would witness were never experienced in their natural habitat. But after interacting with these gadgets for a while, they might accept them like all of us – as useful objects with new qualities. This adaptation would resemble the way that humans interacted with each other long before modern medicine explained how their internal organs operate.  Similarly, we can use the display of a cell phone without knowing how the gadget works. The experience might be the same in our first encounter with extraterrestrial AI astronauts.

Good communication skills by any party are only possible through a good understanding of those on the other side. They constitute the oil that minimizes the friction with the rugged terrain of reality. Understanding the components that make up reality beyond ourselves is key for our survival.

After all, the dinosaurs did not study the sky through telescopes. As a result, when the Chicxulub impactor hit the ground, its message, unfortunately, was one-sided.