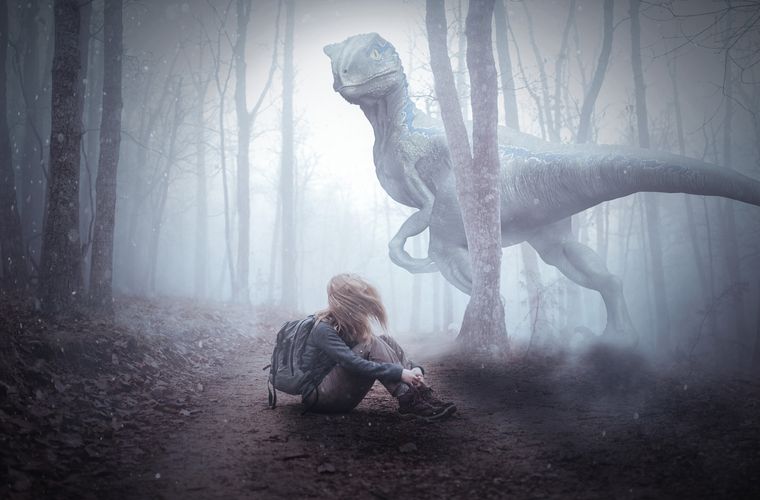 Dinosaurs are returning once again to headlines as the new Jurassic Park: World Domination movie is set to premiere in the days ahead. From what we saw in the last film in the series, Jurassic Park: Fallen Kingdom, and this new one’s trailer, audiences know that the new movie is set in a world where dinosaurs live among us.

In the trailer, from snowy wildernesses to drive-in movie theaters, dinosaurs are shown making an impact on their new environment. While this idea makes for a good story on the silver screen, what if it had actually happened? In other words, if dinosaurs had not been wiped-out eons ago, could they truly survive alongside us in our modern society?

There are many different variables in determining if dinosaurs could survive in modern times. Variables such as temperature, food sources, and oxygen levels are all factors that might impact dinosaur survival. Because dinosaurs lived in much warmer climates millions of years ago, many experts doubt they could even survive today.

However, new evidence is showing that many types of dinosaurs were able to survive in colder temperatures (and even snow) thanks to insulation provided by their proto-feathers. Since their discovery, these feathers have been featured in shows like Apple TV+’s Prehistoric Planet, which showcases current knowledge of dinosaurs by using amazing animations. Even in Jurassic Park: World Domination‘s trailer, dinosaurs are seen trekking through the snow. While these movies don’t prioritize accuracy, they do align with the expert’s opinions that cooler temperatures may not present as much of a problem for survival.

The atmosphere’s oxygen level is another factor to consider for dinosaur survival. Archaeologists have determined the oxygen levels of our prehistoric Earth using trapped air bubbles in amber. These bubbles suggest that the Cretaceous period’s atmosphere may have had around 35% oxygen, which is significantly higher than our current atmosphere’s 21% oxygen. Because of this, if dinosaurs lived in our modern society, they would no doubt feel the effects of altitude sickness, including fatigue. This would severely debilitate these creatures, and not allow them to be as active as they are portrayed in the Jurassic Park movies.

If dinosaurs were to survive today, they would also need to eat. While the Jurassic Park movies portray the carnivorous dinosaurs as ravenous beasts hurting mainly humans, in reality things would likely be rather different. Like many wild carnivorous animals, dinosaurs would attack prey that they were familiar with, which would mostly constitute other dinosaurs. However, as humans have grown so much in population size and are ubiquitous across the globe, it may not be a surprise to see a hypothetical current dinosaur switch prey due to evolutionary drives.

For herbivorous dinosaurs, the options would not be so varied. The current amount of vegetation needed to sustain these animals has shrunk significantly since the Cretaceous period due to human activities like deforestation, development, and travel. Because these areas of vegetation are continuing to shrink, mainly due to climate change, herbivorous dinosaurs would not have enough food to sustain them, and may not survive as long as their carnivorous counterparts.

Outlook: From Could to Should

While dinosaurs living among us seems like a neat idea (and clearly an entertaining movie plot), it also brings up several ethical questions. These questions concern the quality of life for these animals, as well as how our society would change its function with the existence of these colossal beings. Like all of the Jurassic Park films, we as a society would have to know who is to blame if these animals turned deadly, and who would ultimately be in control.

Regardless, real dinosaurs in prehistoric times, and even those which we now marvel over in theatres, continue to emphasize the classic struggle between humans and beasts… although in the latter case with better sound and visual effects.