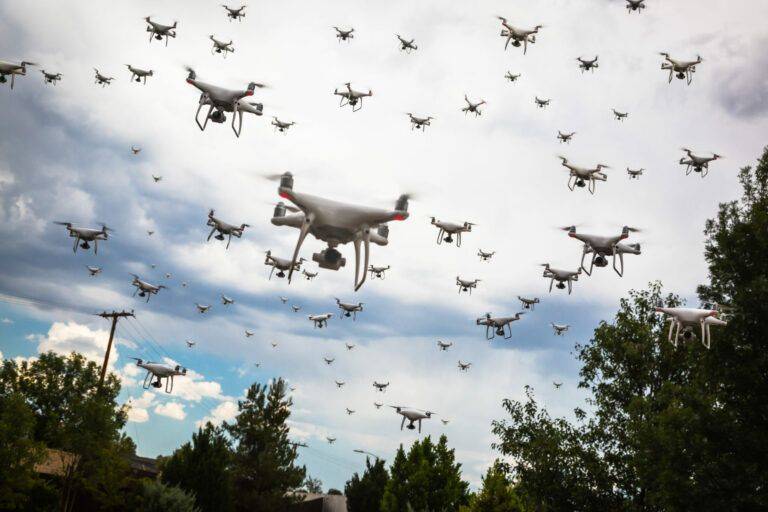 
DARPA edges closer to its dream of having 250 AI drones for urban warfare environments.

To anyone who’s ever watched a Terminator movie, the idea of creating artificially intelligent robot warriors likely sounds like a really bad idea. Nevertheless, at the Defense Advanced Research Projects Agency (DARPA) — officials seem undeterred. Their dream of developing combat-ready swarms of autonomous drones is steadily on its way to becoming a reality.

DARPA announced the completion of the fourth major field experiment in its OFFensive Swarm-Enabled Tactics Program (OFFSET) in late September. Originally initiated in 2017, with OFFSET, DARPA envisions swarms of up to 250 autonomous aerial and land-based drones collectively descending upon urban environments to provide critical insights for military ground forces.

In this fourth of six planned field experiments, heterogeneous swarms of autonomous air and ground vehicles descended upon the Leschi Town Combined Arms Collective Training Facility (CACTF) at Joint Base Lewis-McChord in Washington. During the test, teams of ground vehicles, multirotor, and fixed-wing aircraft showed off their ability to analyze two blocks of a mock city and correctly identify, surround, and secure target buildings.

Speaking with The Debrief, OFFSET’s program manager, Dr. Timothy Chung, said, “Cities present a significant challenge for dismounted troops as they navigate and search tall buildings amid tight spaces. The genesis of the OFFSET program was to find ways for small unit teams to benefit from advances in swarm autonomy and human-swarm teaming. With OFFSET, the goal is to provide greater insights via collaborative ground and air autonomous systems — around corners and in buildings — to dismounted troops as they traverse urban environments.”

OFFSET is hardly the only autonomous drone program currently under development by the United States. Another DARPA project currently marching towards operational completion is a program codenamed GREMLINS.

Named for the mischievous imaginary creatures blamed by British pilots during WWII for causing aircraft malfunctions, DARPA’s Gremlins represent swarms of Unmanned Aerial Systems (UAS) that can be launched outside of the range of adversaries’ defenses by larger aircraft such as bombers or transport planes. According to DARPA, “When the gremlins complete their mission, a C-130 transport aircraft would retrieve them in the air and carry them home, where ground crews would prepare them for their next use within 24 hours.” In November of last year, DARPA completed its first test flight of the X-61A vehicle used for the Gremlins program.

Additionally, since at least 2013, the Strategic Capabilities Office of the Department of Defense and Air Force has been testing and developing the Perdix drone system.

Capable of being launched from manned fighter aircraft, with Perdix, masses of tiny (12-inch) drones can perform reconnaissance missions and evade air defense systems by operating with a collective hive mentality and traveling in leaderless “swarms.”

“Perdix are not pre-programmed synchronized individuals, they are a collective organism, sharing one distributed brain for decision-making and adapting to each other like swarms in nature,” William Roper, Director of the Strategic Capabilities Office, told BBC News.

The last known testing of Perdix was in October of 2016, when the Air Force test-launched 103 Perdix drones at Edwards Air Force Base in California.

The U.S. Air Force is Gearing Up For Action With Its New Fighter-Mounted Lasers

While hundreds of autonomous drones’ ability to work in concert with each other is impressive, some experts have raised concerns with AI swarm technologies being developed by the world’s major military powers.

In a 2017 letter to the United Nations, 116 AI experts, including Tesla and SpaceX founder Elon Musk, expressed concerns with the dangers of developing military hardware capable of “thinking” for itself and lacking any need for human guidance. “Once developed, they will permit armed conflict to be fought at a scale greater than ever, and at timescales faster than humans can comprehend,” the letter said.

Current Department of Defense policy states autonomous or semi-autonomous weapons systems must be “designed to allow commanders and operators to exercise appropriate levels of human judgment over the use of force.” Citing a 2018 US government white paper, the Congressional Research Service noted, “human judgment over the use of force” does not require manual human “control” of the weapon system, as is often reported, but rather broader human involvement in decisions about how, when, where, and why the weapon will be employed.

In essence, vagueness in DoD policy currently opens the door for military commanders to authorize autonomous drones to use force prior to being deployed, thus giving machines the ability to choose when to pull the trigger.

When it comes to concerns over OFFSET’s drone swarms ultimately operating safely within heavily populated urban settings, DARPA’s Dr. Chang said, “As a research and development agency, DARPA proves the feasibility of advanced concepts before transitioning the technology to service partners. It is up to the service partners to determine the best timeline and technologies suited for integration to advance their respective missions.”