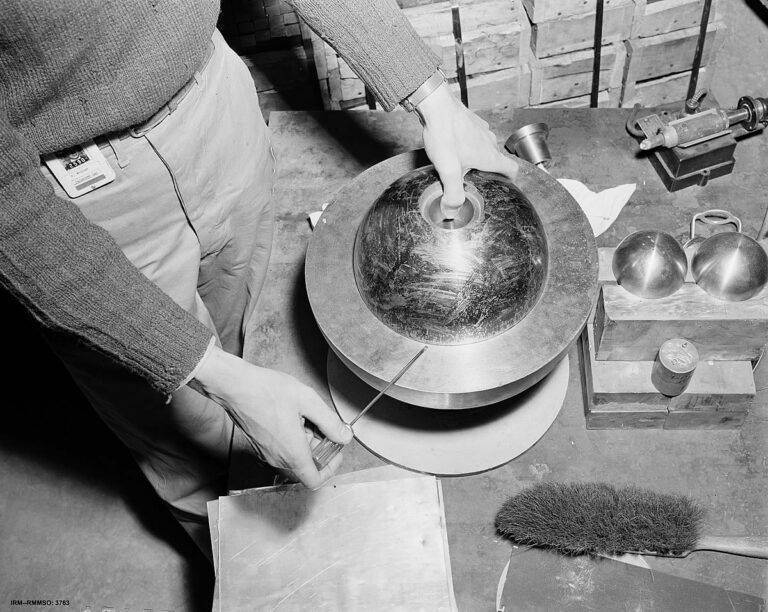 Tickling A Dragon’s Tail: The Physicist Who Tangled with The Demon Core and Lost

December 1st marks the 110th birthday of Louis Slotin. This Canadian physicist worked on the infamous Manhattan Project, the secret US program to build the first nuclear bomb, and died trying to understand the secrets of the Demon Core.

There is a very tiny park tucked away in Winnipeg, Canada. Barely 500 square feet in size, there’s room only for two park benches, a bed of flowers, a cobblestone platform, and a bronze plaque. Although tourism is discouraged during the pandemic, visiting an outdoor point of interest is still allowed with social distancing and adherence to local health and safety regulations—even a small park like this one, and even if nuclear radiation were not involved.

And if you were to visit the park at the foot of Luxton Avenue near the Red River in Winnipeg, you would see that it is dedicated to the memory of a man named Dr. Louis Slotin, a name you’ve probably never heard. And yet, he played a significant part in nuclear research and the atomic bomb. But why is the park in Canada?

Slotin was born in Winnipeg, Manitoba, on December 1st, 1910. He attended St. John’s Technical High School and the University of Manitoba, winning the gold medal in chemistry and physics and receiving a Master’s Degree in Science in 1933. He went to England and got his Ph.D. in biochemistry from King’s College, London, in 1936. He came back to North America and became a research associate at the University of Chicago, working on its cyclotron.

And this is where his story gets interesting.

Slotin was invited to work in the Manhattan Project’s Metallurgical Laboratory and moved to Los Alamos, New Mexico, in 1944. He worked with the big names: Oppenheimer, Teller, and Fermi. He was one of the few who learned how to design and manufacture triggering devices for bombs, specifically atomic bombs. And he got quite good at it.

The Los Alamos lab manufactured four small spheres of fissionable nuclear material. One was called Gadget and was used in the famous Trinty test. The second was Fat Man, which detonated over Nagasaki. The third, Little Boy, exploded over Hiroshima in 1945.

The fourth stayed in the lab, but no one seemed to know exactly what to do with it after Japan surrendered. It was known as the Demon Core because it seemed to attract death.

Otto Robert Frisch was a physicist at Los Alamos who wanted to study the core in detail to understand what precisely happened during nuclear criticality. He started doing experiments on it, knowing that a slight misstep would mean certain death. Richard Feynman, the famous theoretical physicist who also worked on the Manhattan Project, cautioned against the experiments, saying that they were like “tickling the tail of a sleeping dragon.”

A few weeks after Hiroshima, physicist Harry K. Daghlian Jr. was carefully placing brick shielding around the Demon Core when he accidentally dropped a brick onto it. The core instantly went Critical and blast of radiation struck Daghlian and went as far as reaching an innocent security guard who was reading his newspaper in the hallway outside. Receiving an extreme dose, Daghlian died 22 days later, and the guard eventually succumbed to leukemia in later years.

While Daghlian suffered in his hospital bed, sitting beside him and offering comfort was his colleague Louis Slotin. After Daghlian died, Slotin took over the experiment. This time, Enrico Fermi also warned about tickling the dragon’s tail, but Slotin was undaunted. His curiosity was without bounds.

On May 21st, 1946, Slotin and seven other scientists were in a lab where Slotin tested the levels of radiation that could be attained just previous to actual criticality. The team placed the plutonium core within a hemisphere of a beryllium alloy. A second hemisphere was slowly lowered onto it such that it never fully enclosed the core (which would create an immediate chain reaction). To prevent that, a set of shims kept the two hemispheres apart.

However, Slotin felt that instead of shims, he could better regulate the separation by using only his instincts and a screwdriver to pry the two halves apart. Everything went well enough for a few minutes until his screwdriver slipped.

As the story goes, Slotin quickly leaped forward, covering the experiment with his body, absorbing much of the radiation, and saving the lives of the others in the room. It has been calculated that Slotin received an astonishing 10 sieverts of radiation, whereas someone standing one kilometer from Hiroshima ground zero would “only” have received 4 sieverts.

The Slotin accident was featured in the 1989 film Fat Man and Little Boy starring Paul Newman and John Cusack.

The experiments involving human control were ceased immediately and replaced with remote manipulation. The Demon Core was used in a test blast over the Marshall Islands in 1946. But the world had learned a valuable lesson about nuclear energy.

Per his family’s wishes, Slotin’s body was flown back to Canada and buried in a local cemetery. Urban legend has it that his remains had to be transported and buried in a lead-lined coffin because of the high radiation, but this is not true.

That little park in Winnipeg, the one with the small bed of flowers and cobblestones, bears his name. The small plaque that sits in Dr. Louis Slotin Memorial Park reads:

“This park is dedicated to the memory of Dr. Louis Slotin, who willingly and heroically laid down his life to save seven fellow scientists during an experiment on May 21st, 1946, at the Los Alamos atomic research project in New Mexico, USA. As the laboratory was being swept with deadly radiation, Slotin spontaneously leaped forward, covering the experiment with his body. He was taken to hospital, where he died nine days later. His seven co-workers survived. Slotin and his family had resided at 125 Scotia Street, just a short walk north of this park. Descendants and family members still reside in Winnipeg.”

His simple gravestone in the cemetery has a line from Psalm 3: “O Lord, you art a shield about me.”

The little memorial park is near his family’s original home in northern Winnipeg. The park was dedicated in 1994, a testament to a man who tickled the dragon’s tail—and paid the awful price.