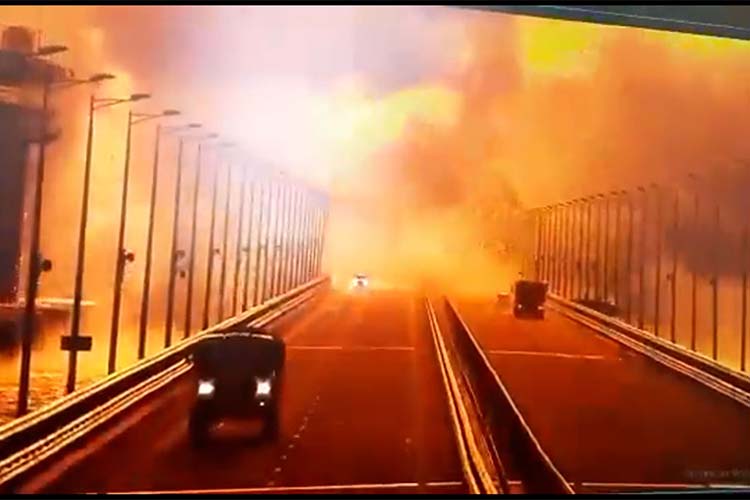 Russian anti-terrorism officials have claimed that the detonation of a bomb-laden truck was responsible for extensive damage to sections of the road bridge and caused seven fuel cars on the parallel railway bridge to ignite. However, aside from an apparent explosion, the cause of the bridge’s destruction remains unclear.

Videos and images on social media show at least three spans of the road bridge had collapsed and several railway tankers still burning on the nearby elevated rail bridge.

Here is what we know so far about the destruction of the Crimean bridge and The Debrief’s preliminary analysis of this dynamic incident.

Significance of the Kerch Bridge

One day after Moscow’s illegal annexation of Crimea, President Vladimir Putin announced that Russia would build a road-rail bridge over the Kerch strait, connecting the peninsula with the rest of the Russian Federation.

Aside from being a more practical route to Crimea than the Kerch Strait ferry line, the bridge was deeply symbolic in showing Russia’s commitment to forever making Crimea a part of the Russian Federation.

The Kerch bridge sits 115 feet above the water and spans almost 12 miles (19 KM), making it the longest bridge in Europe. The total construction cost was over $3.7 billion.

The construction contract for the bridge was awarded to oligarch and Putin’s childhood judo sparring partner, Arkady Rotenberg. To commemorate the bridge’s official opening in May 2018, Putin personally drove an orange Kamaz truck across the bridge alongside Rotenberg.

“In different historical epochs, even under the tsar priests, people dreamed of building this bridge,” Putin told workers at the ceremony. “Then they returned to this [idea] in the 1930s, the 40s, the 50s. And finally, thanks to your work and your talent, the miracle has happened.”

The bridge has been called “the crown of Vladimir Putin’s infrastructure projects” and hailed by Russian media as the “construction of the century.”

For all of these reasons, the Kerch bridge is particularly despised by Ukraine.

Over the summer, as the tide of war in Russia’s ongoing invasion of Ukraine began to tip in Kyiv’s favor, Ukraine started taunting Russia with threats to bring down the Kerch bridge.

In August, Ukraine’s Ministry of Defense posted a humorous video of a U.S.-made HIMARS launch vehicle floating on a pink inflatable pool raft near the bridge with the words, “Kerch bridge… we are watching you!”

Who is Responsible For the Recent Attack on Kerch Bridge?

Head of the Russian-installed Crimean parliament, Vladimir Konstantinov, claimed the attack was carried out by “Ukrainian vandals.”

“They now have something to be proud of. For 23 years of their economic management, they did not manage to build anything worthy of attention in Crimea, but they managed to damage the floor of the Russian bridge,” he added on his Telegram channel,” said Konstantinov on Telegram.

So far, the Kremlin has not assigned blame for the attack, with Russian President Vladimir Putin ordering the creation of a government commission to investigate the explosion.

The news of the bridge’s destruction in Ukraine was met with excitement and jubilation.

“The guided-missile cruiser Moskva and the Kerch Bridge – two notorious symbols of Russian power in Ukrainian Crimea – have gone down,” tweeted Ukraine’s Ministry of Defense. “What’s next in line, Russkies?”

Ukraine has not directly claimed responsibility for the attack. However, Ukrainian officials’ mocking posts on social media have hinted that Kyiv was behind the bridge’s collapse.

“Crimea, the bridge, the beginning. Everything illegal must be destroyed, everything stolen must be returned to Ukraine, everything occupied by Russia must be expelled,” said Mykhailo Podolyak, an adviser to Ukrainian President Volodymyr Zelenskyy, on Twitter.

Secretary of Ukraine’s National Security and Defense Council, Oleksiy Danilov, posted a video of Marilyn Monroe singing “Happy Birthday, Mr. President” next to footage of the bridge on fire; a reference to Putin’s 70th birthday, which occurred a day prior on October 7.

So while it isn’t conclusively known, Ukraine is the overwhelming odds-on favorite for being responsible for the bridge attack.

An unnamed former senior British army explosives expert told the BBC the attack was a “masterpiece of clandestine sabotage.”

How Was the Attack Carried Out?

Kremlin officials have said the destruction of the Kerch bridge was carried out by a truck bomb traveling on the road bridge.

Several CCTV videos of the attack published on social media show a dark-colored semi with an attached white trailer traveling in the right westbound lane of the road bridge at the exact point where a massive explosion suddenly erupts.

A forensic examination of the videos by The Debrief proved inconclusive, and it was impossible to tell for sure if the initial blast was initiated from the semi or if the truck just happened to be in the vicinity of the seat of the explosion.

A frame-by-frame analysis of one video taken from underneath the rail bridge shows a bright high-intensity flash in the location of the semi-truck milliseconds after the initial blast, potentially supporting the theory that the attack was carried out by a vehicle-borne explosive.

The initial explosion resulted in an extremely bright fireball that burned reasonably evenly at the suspected ignition point as high-pressure gasses traveled outward at high velocity.

Frame-by-frame analysis of the blast shows a series of secondary high-intensity flashes traveling linearly and slightly upward from the explosion site toward the rail bridge and nearby fuel cars.

The two available videos appear to show the blast wave demonstrating an acute leftward trajectory rather than a perfect radial blast. This could indicate a shape-charge explosive was used. Likewise, the position of the CCTV cameras could be obscuring the full explosion and radial shockwave. Images of the post-blast site suggest the latter is likely the case, as structural damage to the guardrail sections shows damage evenly going outward in opposite directions.

The available videos of the explosion and images of the post-blast site fail to show indications of a missile or precision artillery strike. Blast damage is also not indicative of an explosion being initiated from underneath the bridge.

The one thing that is clear from the imagery is that a high-explosive with significant shattering capability and detonation pressure, also called brisance, was used in the bridge attack. Compounds like TNT, C-4, or ammonium nitrate are examples of high-explosives capable of producing high brisance, supersonic shock waves like we see in the Kersch bridge explosion.

By mid-morning on Saturday, Russian authorities said the owner of the semi-truck used in the attack had been identified as a resident of the Krasnodar in the North Caucasus region in Southern Russia.

“Investigative activities are being carried out at his place of residence,” stated Moscow’s investigative committee.

It’s worth noting that a truck bomb being responsible for the bridge’s destruction does not inherently mean this was a suicide attack. For example, explosives could have been surreptitiously placed inside a container and remotely detonated, with the driver unwitting of their deadly cargo.

Impact of the Kersch Bridge Destruction

The damage to the Kerch bridge has cut off Russia’s single overland route to Crimea. Until repaired, the only way to get to and fro from the peninsula will be by either air or sea.

Invariably, this will further devastate Russia’s already beleaguered supply lines in its ongoing invasion of Ukraine.

Images have shown significant structural damages to several sections of the bridge, and Kremlin spokesman, Dmitry Peskov, said, “it was too early to tell how long it would take Russia to rebuild the bridge.”

By mid-afternoon, Saturday, Russia’s transportation ministry said that limited road traffic for cars and buses had resumed on the intact lanes of the Crimean bridge. They did not clarify if this was restricted to only outbound traffic leaving the peninsula or if officials had converted the remaining eastbound landbridge to a two-lane highway allowing travel toward Crimea.

On the same day of the bridge attack, Moscow announced the appointment of a new overall military commander in Russia’s “special military operation” in Ukraine. According to state media, Army General Sergey Surovikin will now lead Russia’s faltering invasion. Surovikin previously served as the commander of Russia’s Eastern Military District.

The lingering question is how Moscow will respond to the attack on its venerated landbridge to occupied Crimea.

At a minimum, the bridge’s destruction is another colossal propaganda victory for Ukraine and a dramatic statement that Kyiv is undeterred by Moscow’s sham annexations and Putin’s nuclear threats.

Editor’s Note: An earlier version of this article listed the semi-truck suspected of causing the blast as traveling eastbound instead of westbound on the Crimean bridge.