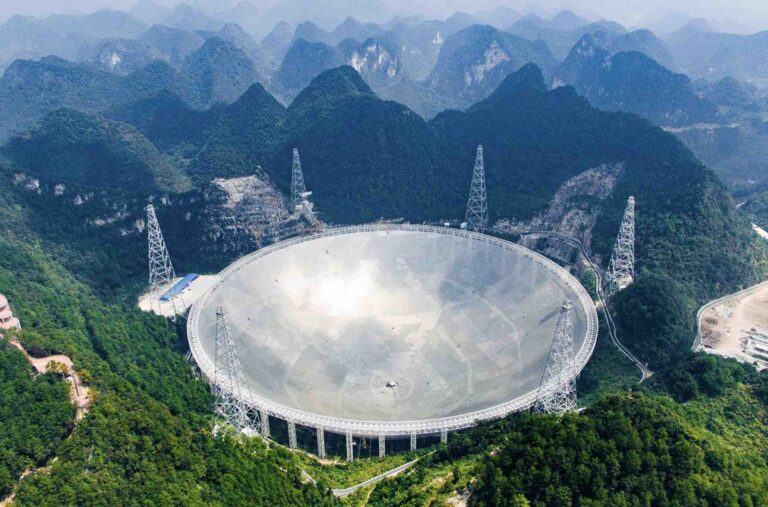 A series of mysterious signals characterized as “possible technological traces” of extraterrestrial civilizations have been detected by Chinese researchers, according to a report published this week.

According to the Chinese Ministry of Science and Technology’s official newspaper Science and Technology Daily, researchers with Beijing Normal University claim that the “suspicious signals” were detected by the China Extraterrestrial Civilization Research Group of the University’s Department of Astronomy with the help of the massive “Sky Eye” radio telescope.

Sky Eye, officially named the Five-hundred-meter Aperture Spherical radio Telescope (FAST), is the world’s largest filled aperture radio telescope. Consisting of a 1,600-foot diameter dish that was built into a valley it also clocks in as the second-largest single-dish aperture currently in use anywhere in the world and has been in operation since September 2016.

Professor Zhang Tongjie, chief scientist with the China Extraterrestrial Civilization Research Group and one of the sources for the information quoted in the report, said that Sky Eye detected “several narrow-band electromagnetic signals” which appeared to differ from past examples believed to have natural origins.

Zhang told Science and Technology Daily that the likelihood that the signals are some variety of radio interference “is also very high,” adding that this possibility must be “further confirmed and ruled out.”

Although Zhang says this will be a long process, he nonetheless conveyed confidence that he and his fellow scientists will prevail in the race to discover proof of extraterrestrial life, a position he has maintained now for some time.

“We look forward to ‘China Sky Eye’ being the first to discover and confirm the existence of extraterrestrial civilizations,” Zhang told Science and Technology Daily.

Since the report appeared online, several media outlets have carried the story, albeit with little elaboration on other possible sources for the electromagnetic signals in question. But leading with presumptions about alien technosignatures—given the range of other interpretations that exist—is premature, to say the least.

SETI Institute senior astronomer Seth Shostak says that one alternative Zhang has proposed—radio interference from terrestrial sources—should be first to receive attention from researchers before more exotic interpretations are made.

“The other possible source of narrow-band signals (i.e., not aliens) is terrestrial interference,” Shostak explained in an email to The Debrief. “Radars in aircraft and at airports all produce signals of this type.”

According to Shostak, adding to the likelihood of terrestrial sources of interference are satellites in orbit, which broadcast data they collect back to ground stations on Earth, potentially leading to the appearance of signals emanating from sources more distant in space.

“Facts are, you can’t really point an antenna at the sky at microwave frequencies and not pick up this clutter,” Shostak says. “In a week, I’m sure we would log hundreds of such signals.”

The signals detected by the FAST telescope remain intriguing. However, in advance of further studies and peer review of the data that’s been collected, it’s obviously a bit soon to leap to any conclusions. This remains true, even despite the high hopes of many astronomers like Shostak, who share a sense of excitement about the real potential of discovering signs of intelligent life elsewhere in our universe in the years ahead.

Going forward, Shostak warns that scientists must coordinate studies in ways that help to reduce the likelihood of detecting clutter instead of communication. To do this, any search for signs of intelligent life on other worlds must always take into account one ever-present factor: us.

“The trick is to develop strategies so that any search for E.T. is not blinded by signals from a very familiar intelligent species – Homo sapiens!” Shostak says.