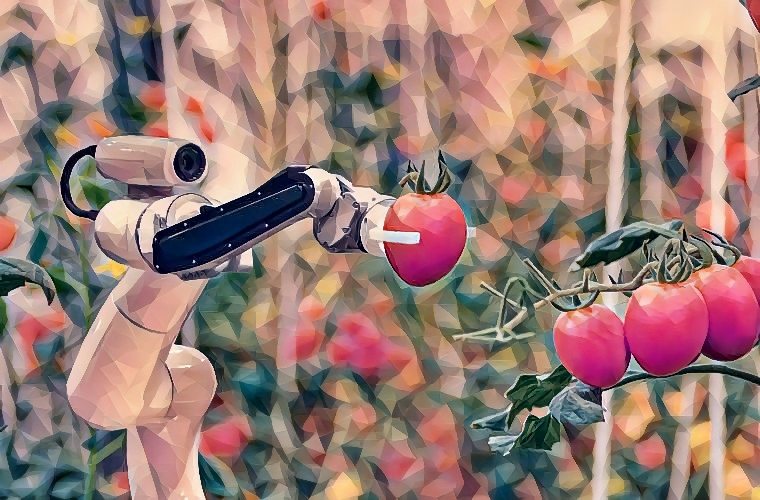 
Farming Robots Are Our Future. Will it be a Utopia or an Agricultural Dystopia?

Economist Thomas Daum explores how farming robots could lead the industry towards an environmentally friendly and abundant utopia, or a dystopia of heavy machinery and low-quality harvests in a new paper published in the Trends in Ecology and Evolution journal.

Background: Are There Robots on Farms?

The use of robots in agriculture is nothing new. Primitive versions of autonomous vehicles were already in use in the early 20th century. As technology continued to advance and after the invention of the computer, proper agricultural machines began to be developed.

These can come in the form of robots that would perform harvesting tasks, such as Root A.I.’s tomato picking machine “Virgo” and autonomous vehicles using technology similar to self-driving cars to take care of fields. A more complex application of robots in agriculture can be found in EarthSense’s “TerraSentia field phenotyping system,” utilizing laser sensors to travel down rows of crop fields while simultaneously collecting detailed data on crop quality and health. Robots have also been developed to perform other more sweeping tasks in the field, such as seeding the ground or spraying the crops with pesticides. Total automation of outdoor agrarian land seems unrealistic for the near future, as the unpredictability of natural conditions could cause too many variables for modern robots to overcome. However, indoor farms and alternative planting methods may alleviate this issue.

The first is that of a farming utopia, in which small autonomous robots work the farms in an environmentally friendly fashion that deliver better quality and more diverse produce. The other future is dystopian, in which farmland is tended to by large machines that would raze the land and cover the homogenous crops in chemicals.

As agricultural robots are beginning to become more and more of a mainstay, with their market value reaching over $5 billion US in 2020, Daum suggests actions need to be taken soon to achieve a more utopian future for farming. European farms, which are primarily smaller and more numerous, would benefit significantly from the utopian scenario. However, American farms are substantially larger and more voluminous, and a system of smaller farming bots would not be well suited to them. This could require a more hybrid approach using a mix of both smaller and larger agricultural bots and different growing and structuring methods to achieve a more utopian outcome. America, in particular, would suffer from a dystopian agricultural future, as the management and upkeep of the complex machines would be too costly for its many family farms.

Daum clarifies that the benefits of the utopian system go beyond the purely environmental effects, offering a positive impact on consumers. Given a state of agricultural utopia, Daum suggests that cereal crops wouldn’t just be the primary produce grown, leading to a more diverse selection come harvest. Fruits and vegetables would also become cheaper, making the process of eating healthier significantly more monetarily accessible. Organic crop yields would be higher as well and make for healthier soil.

Outlook: What is the Future of Food?

When it comes to whether or not this technology is here to stay, the outlook is very clear. The act of farming is incredibly labor-intensive, and humans have been finding new ways to eliminate some of that intensity ever since they began growing food. With the market for agricultural robots growing, it is clear that the interest and funding are there for these robots. Daum acknowledges that it is unlikely that a purely utopian or dystopian scenario will play out but remaining vigilant while the technology is still in its effective infancy is vital to ensure the best possible outcome in the future.

Life on Venus: The Potential Habitability of Venusian Clouds

The farming culture in America plays an interesting role, as most U.S. farms are family-owned. It would be up to them to decide the extent they embrace this technology and whether it be of the hypothesized utopian or dystopian kind. Smaller robots such as the previously mentioned Virgo and TerraSentia are already being developed. While Daum thinks the dystopian outcome would be easier and therefore more likely to happen, some of agricultural automation’s most significant technological leaps currently seem to align more with his utopian future. And should it allow the families to keep their land and livelihood and ease their labor intensity, that future may be more likely than one may think.