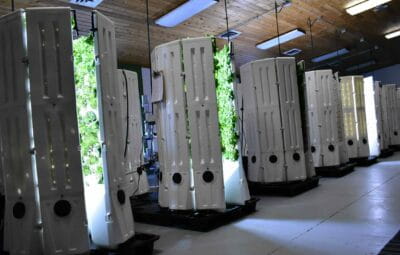 Vertical Farming Is The Future of Food Production


Vertical Farming is more efficient but will it replace traditional farming?

Earth’s population is rapidly approaching eight billion, and the challenges of feeding such a huge, growing populous are only increasing. Vertical farming is a novel agricultural technique that may soon have farmers rethink and reshape how they grow food.

BACKGROUND: Vertical Farming May Be Essential

In a 2012 post about food sustainability on the United Nations website, José Graziano Da Silva, Director-General of the Food and Agriculture Organization, wrote, “agricultural systems, which include non-food as well as food products, livestock, fisheries, and forestry, are the main source of food and income for most of the world’s poor and food-insecure people, around 75 percent of whom live in rural areas.”

Da Silva highlights these and other issues, concluding, “Thus agriculture is at the heart of the solution of the sustainability issue. If we improve agricultural and food systems, we can improve the livelihoods and health of people, and produce healthier ecosystems as well.”

That was almost ten years ago. Since then, several aggressive companies have taken on the mission to make food production cheaper and energy-efficient while making the food more nutrient-dense and often tastier.

ANALYSIS: How does Vertical Farming Work?

“Vertical farming is a type of controlled environment agriculture that uses artificial lighting, typically indoors, and vertical planting systems that utilize a space’s cubic footage as opposed to square footage in traditional farming,” Megan Pirelli, community engagement director at Fork Farms, told The Debrief. “This allows for significantly more production in a much smaller space.”

Founded in 2010 and now headquartered in Green Bay, Wisconsin, Fork Farms launched its first hydroponic systems out of a garage, installing eight vertical gardens for nonprofit food security organizations. Today, the company has over 500 functioning “Flex-Farm” installations across 22 states and Canada.

Their newest vertical farming system is Flex-Farm Generation 4. This system features a host of technical advantages to traditional farming. Pirelli told The Debrief that a system like Generation 4 can produce “more than 394 pounds of produce annually, (using) a standard electrical outlet and less than 10 square feet of space.” That same system also boasts “45x food production vs. traditional agriculture, and uses 98% less water required vs. traditional agriculture.” Fork Farm’s website also notes that the system is “95% more energy efficient, 99% more land efficient, and 97% more water-efficient when compared to traditional farming.”

These efficiencies make up the bulk of the vertical farming movement’s philosophy. Food growers need to address the four core challenges of traditional farming: water, energy, space, and food quality.

The Fork Farms system attempts to utilize simple technology to make vertical farming as efficient as possible. Using reflective surfaces inside their systems allows for an increase in the amount of light energy that reaches the plants and uses less power.

“You can get the cost of growing food down to less than a dollar a pound,” their website states. That figure compares to an industry standard of $2.50 per pound for large farming operations.

Pirelli sees even more room for improvement, telling The Debrief how “advancements in LED lighting have already significantly decreased the energy consumption of vertical hydroponic farms, [and that] incorporating sustainable energy sources such as solar and wind for large-scale farms” will improve things even further.

Utilizing software to automate these farms is also adding to their overall efficiency.

Babylon Farms, a hydroponic farming company that started in 2017, has software that “allows you to remotely manage a fleet of farms from your cell phone, and has simplified the controls needed, so no technical or farming expertise is required,” explained company spokesperson Janet Matthews.

Using a cell phone app and their vertical farm system, their vertical micro-farms connect to the cloud and allow a user to monitor and manage their farms.

Babylon Farms told The Debrief that they could produce the same amount of food in 15 square feet that a traditional, arable farm produces in over 2000 square feet.

Along with greater production, while using less space and resources, which inevitably helps the environment, Matthews also pointed out that Babylon “uses no pesticides in our farming process, which eliminates conventional agricultural runoff. [It] is a major contributor to the polluting of waterways, threatening fish populations in rivers, lakes, and oceans and affecting our groundwater, which is a source of drinking water for most rural areas.”

The most significant benefit of vertical farming is that these systems can take advantage of land and space entirely unusable for a traditional farm.

“Urban spaces that otherwise would not be productive,” Matthews stated, “including rooftops and areas affected by urban blight where abandoned and unused buildings can be adapted for farming.”

OUTLOOK: Is the Future Vertical?

Both companies admit that a limited number of crops flourish in this type of system. These systems are far from solving the world’s food security problem. However, there is enough momentum behind vertical farming that new kinds of crops are being tested out in these systems frequently.

The future of vertical farming involves continued improvements to the respective systems. As with any technology, as it becomes more widely used and accepted, costs go down. As Matthews from Babylon Farms points out, “advances in multiple dynamics of automation will continue to drive up accessibility and drive down the cost of producing food in this manner.”

Specifically, she explained that by using software and science, vertical farming could be for everyone. A large part of this is automation.

“Automation in terms of automated phenotyping of crops, essentially measuring output variables, like growth rate, health, and shape, and correlating that to environmental automation, will lead to tastier, healthier crops at reduced cost, and reduce the requirement of horticultural expertise,” Matthews stated.

In the end, vertical farming uses otherwise unfavorable land, results in dramatic reductions in power and water usage, and looks to put a considerable dent in the problems identified by the U.N. way back in 2012.

Of course, although both companies’ mission is greater access to nutrition combined with an environmentally sustainable production model, Mathews’ final note was one not lost on the people who will one day consume this food on a massive scale.

“One aspect people rarely talk about when being asked about hydroponics is the fact that the produce tastes so much better, it’s a remarkably different experience than eating something that just spent ten days in a truck or on a ship to get to your grocery store. It’s far more flavorful and even crunchier, making your meal a very different culinary experience.”