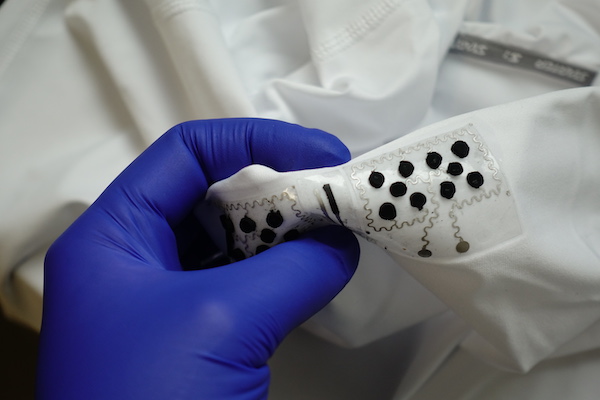 Engineers at the University of California San Diego created a tool that can be worn on a fingertip to generate small amounts of electricity using sweat. The best part is, this wearable technology—a thin and flexible strip—can generate power even when users are asleep, taking the idea of “power napping” to a whole new level.

Background: How did sweat-powered electronics begin?

This type of sweat-powered device is the first of its kind, according to Lu Yin, a nanoengineering Ph.D. student at the UC San Diego Jacobs School of Engineering and co-first author of the study.

“Unlike other sweat-powered wearables, this one requires no exercise, no physical input from the wearer in order to be useful. This work is a step forward to making wearables more practical, convenient and accessible for the everyday person,” Yin said.

As futuristic as this technology sounds, research on biofuel cells actually started in the 1960s. The lab at UC San Diego has been working on sweat-based wearable biofuel cells for a decade.

In an email to The Debrief, Yin writes, “Our previous research focuses more on novel wearable form factors (flexible, stretchable, textile-based), and their operation relies on exercise-induced sweat.”

The energy harvesting device the lab has recently developed can also generate extra power through light finger presses; any activity that requires such motion—typing, playing piano, tapping on a surface—can become a source of energy.

“The goal is that this [wearable technology] will naturally work for you and you don’t even have to think about it,” said said Joseph Wang, a professor of nanoengineering at the UC San Diego Jacobs School of Engineering and the study’s senior author.

Analysis: How does this wearable technology work?

Let’s address the obvious question: why fingertips? Our fingertips are constantly sweating. Each one is loaded with over a thousand sweat glands and can produce between 100 to 1000 times more sweat than any other part of the body (side note, is reading this making you sweat too?)

We may not feel our sweaty fingertips at all times because they’re exposed to more air than the rest of our bodies (think armpits). “The fingertips are always exposed to air, so the sweat evaporates as it comes out. So rather than letting it evaporate, we use our device to collect this sweat, and it can generate a significant amount of energy,” said Yin.

This sweat-fueled device is a thin and flexible strip that can wrap around each fingertip like a band-aid. It is padded with carbon foam electrodes that take sweat and convert it into electrical energy. These electrodes have enzymes that trigger chemical reactions between lactate and oxygen molecules found in sweat, thereby generating electricity.

To boost its generating capabilities, this device also carries a chip made from piezoelectric material, which produces more energy when pressed.

As part of their study, researchers had subjects wear the device on their fingertips as they completed sedentary activities. After 10 hours of sleep, the device collected almost 400 millijoules of energy—enough to power an electronic wristwatch for a whole day.

Although this research was conducted with the device strapped on one fingertip only, nine others could potentially be used to generate electricity in this way.

Is it even possible that one day we will be able to charge smartphones with such wearable technology? To Yin, the aim of this device is all about practicality.

“We want to show that this is not just another cool thing that can generate a small amount of energy and then that’s it–we can actually use the energy to power useful electronics such as sensors and displays,” he said.

What are some of the next steps the lab needs to take before making this technology available to the public? Well, there needs to be low-power wearable electronics to make use of this breakthrough technology.

“To push this technology to the public, we would also want to develop corresponding low-power wearable sensors and electronics that are complementary to this BFC to establish self-sustainable wearable electronics in which the consumers would be interested and benefit,” Yin said.