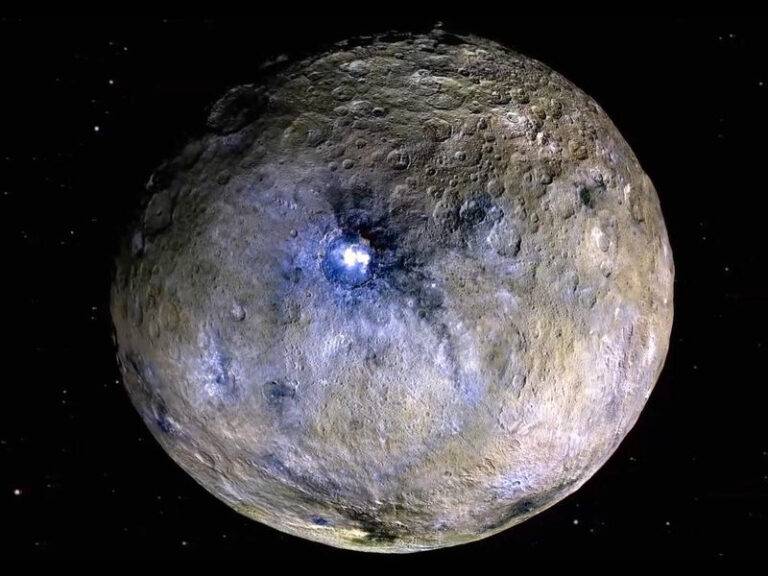 New research indicates that the dwarf planet Ceres may actually be an ocean world, and a slew of other recent discoveries suggests that our solar system is much wetter than previously thought. This water would be essential for future space missions, such as those already envisioned in NASA’s Moon to Mars initiative, but also in understanding the potential prevalence of life in our neighborhood.

Research papers published in August propose that Ceres may be home to a large subterranean ocean. NASA’s Dawn Orbiter, launched in 2007, began snapping high-resolution images of Ceres in 2015 and was in orbit around the body for three years before running out of fuel.

According to the studies, the images transmitted back to Earth indicate that Ceres has natural deposits of sodium chloride concentrated in the Occator crater on the planet’s surface.

Astronomers believe that the crater was formed when Ceres was struck by a space rock around 20 million years ago, and that impact punched a hole in the surface. The impact opened up a deep reservoir of salty water, and the liquid water seeped to the surface, where it froze into the deposits spotted by the Dawn orbiter.

On the surface, icy salts would dehydrate within a couple centuries. The data collected by Dawn, however, show they still have water—which can only mean that fluid would have reached the surface relatively recently.

ANALYSIS: Ceres Needs to Be Explored

There is significant evidence that Ceres is not only home to frozen water, but water in a liquid state below the surface.

This discovery comes from a long line of other realizations concerning water in our solar system. In 2013, the Hubble Space Telescope detected hydrogen and oxygen in the atmosphere of one of Jupiter’s moons, Europa. In June, it was announced that data collected by the New Horizons spacecraft in 2015 indicate Pluto may actually be home to an underground ocean. And only a few months ago, NASA’s Stratospheric Observatory for Infrared Astronomy confirmed water on the sunlit surface of the Moon. Recent research also indicates that Mars may be home to a massive subterranean ocean.

“Liquid water is an essential ingredient for all life on Earth and this is the reason we look for signatures of water on other planets and moons,” Dr. Ravi Kumar Kopparapu, a research scientist at the NASA Goddard Space Flight Center, told The Debrief via email. “Finding liquid water does not necessarily mean we will find life, however, it provides a good starting place to look for life.”


"Fire, forget and find?" That question may have just been answered.

Water is a key requirement of life as we know it, and astronomers are excited that these discoveries could lead to finding life elsewhere in the solar system.

OUTLOOK: Water May Not Be As Rare As We Thought

“Other than water, an environment also needs appropriate nutrients and chemistry that facilitates life to exist. Once we find some sort of evidence of water on a planet, our next goal is to make sure the detection is robust and keep studying the chemistry and geology of the environment,” Kopparapu stated. “Whether we will find evidence of life on other planets is yet to be seen by exploring other worlds.”

The discovery of water under the surface of Ceres points to the very real possibility that liquid water is far from rare in the cosmos. Looking ahead, that water could be used by scientists and astronauts in future space missions to generate fuel and oxygen. Beyond that, astrobiologists hope that the abundance of water in the solar system may be a clear sign that life may not be so rare after all.