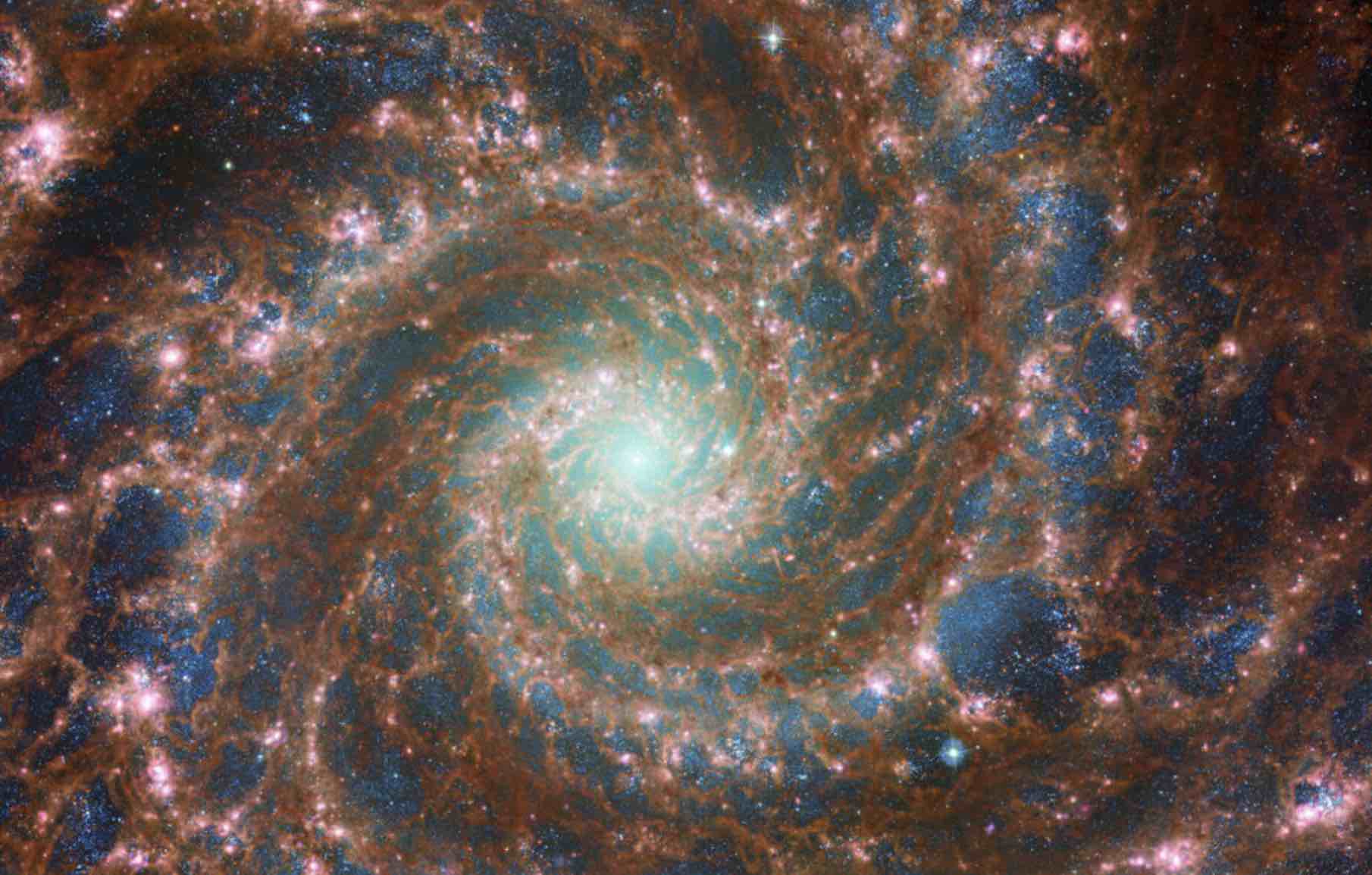 Images of a stunning spiral galaxy 32 million light years from Earth are among the latest stunning efforts that combine data collected by the James Webb Space Telescope and its predecessor, the Hubble Space Telescope.

Located in the constellation Pisces, Messier 74, also known as the “Phantom Galaxy,” is a massive spiral galaxy possessing a pair of well-defined spiral arms characteristic of what astronomers call grand design spiral galaxies. Despite its distinctive appearance, M74 is difficult to see from Earth due to its low brightness.

However, new data that combines imagery from the James Webb Space Telescope and the Hubble Space Telescope now provide what may be the most complete images of the distant spiral galaxy ever captured, highlighting the complementary work of the two space observatories.

“Webb’s sharp vision has revealed delicate filaments of gas and dust in the grandiose spiral arms of M74, which wind outwards from the centre of the image,” read a statement on the website of the European Space Agency (ESA), a partner with NASA on both observatories. “A lack of gas in the nuclear region also provides an unobscured view of the nuclear star cluster at the galaxy’s centre,” the statement adds.

The images, captured with the help of Webb’s Mid-InfraRed Instrument (MIRI), were part of a recent study that examined 19 star-forming galaxies nearest to our galaxy by the Physics at High Angular resolution in Nearby GalaxieS (PHANGS) survey, an international collaborative effort that combines data collected from multiple space telescopes.

While much of the imagery of the galaxies included in the recent survey had already been collected by existing space telescopes, images from the Webb telescope helped provide observations of the target galaxies at longer wavelengths, which astronomers believe will help them to narrow down the regions where stars form within. The new data will also help them to better measure the ages of star clusters within these galaxies, as well as to study gases and dusty regions they contain.

Among the most notable discoveries from the new combined Webb/Hubble images were the detection of bright areas called H II regions within several areas of star formation. H II regions are the result of the ionization of atomic hydrogen in distant stellar regions that generally accompanies the recent birth of stars. Some H II regions are massive, spanning as much as several hundreds of light years in diameter. Among the most famous examples of H II regions is the Orion Nebula, first observed in 1610.

“Hubble’s sharp vision at ultraviolet and visible wavelengths complements Webb’s unparalleled sensitivity at infrared wavelengths, as do observations from ground-based radio telescopes such as the Atacama Large Millimeter/submillimeter Array, ALMA,” read the ESA statement, which emphasized the significance of data combined from multiple sources from across the electromagnetic spectrum.

Along with the stunning images of the Phantom Galaxy M74, this new data will help scientists “gain greater insight into astronomical objects than by using a single observatory,” the statement adds, underscoring the significance of future collaborative efforts between international partners by utilizing the full spectrum of information now available from several advanced space observatories.