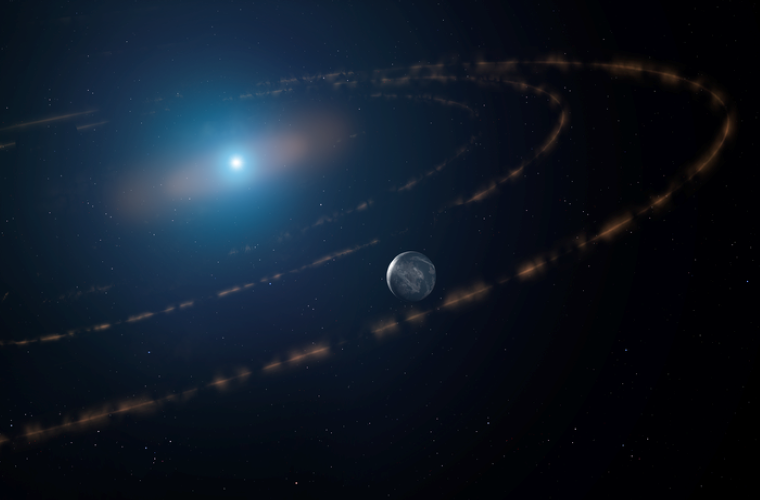 Artist’s impression of the white dwearf star WD1054–226 orbited by clouds of planetary debris and a major planet in the habitable zone. Credit: Mark A. Garlick / markgarlick.com.

Wish Upon a Star

There are several hundred billion stars in the Milky Way galaxy. Currently, there are eight billion living people, with a total of 117 billion people who ever lived on Earth. That comes out to mean that there is at least one star in the Milky Way per person who has ever lived.

Imagine assigning a specific star to each of us. For the purpose of this thought experiment, this will constitute a unique opportunity for people to send an avatar that represents their goals and wishes towards their star, in the form of a miniaturized spacecraft guided autonomously by Artificial Intelligence (AI). Of course, reaching a stellar destination during a human’s lifetime could only be fulfilled for the nearest stars if the craft travels close to the speed of light. Developing the launch technology that can reach a fifth of the speed of light is the goal of the Breakthrough Starshot initiative, whose advisory board I lead.

After Stephen Hawking visited my home for Passover dinner in April 2016, he said, “Last week in New York, Avi and I announced a new initiative that is about our future in interstellar space. Breakthrough Starshot will attempt to build a spacecraft that will reach twenty percent of the speed of light. At that speed, my trip from London would have taken less than a second, as long as you do not count customs at JFK. The technology that Breakthrough Starshot will develop: light beams, lightsails, and the lightest spacecraft ever built, could get to Alpha Centauri in just twenty years after launch. Until now, we could only watch the stars from a distance. Now, for the first time, we can reach them.”

Two years later, Stephen Hawking passed away. I had tears in my eyes while listening to the students’ choir at the conclusion of Hawking’s funeral in Great St. Mary’s Church of Cambridge University, as it sang Frank Sinatra’s song, “Fly Me to the Moon.”

Despite our short life span, as illustrated by Hawking’s premature death, the notion that a craft will make its way towards a star that was assigned to each of us individually could bring a sense of greater purpose to our actions. The technological arrows that humanity could shoot towards the habitable zones of Milky Way stars might eventually reach the doorsteps of advanced extraterrestrial civilizations.

Since the volume of the Solar system is a factor of a quadrillion (fifteen powers of ten) larger than the volume of its habitable region, the number of well-aimed arrows could be much smaller than those shot randomly without aim. We should keep this factor of a quadrillion in mind when interpreting the discovery of anomalous objects near Earth. Targeted probes could be much more abundant than expected from natural objects on random trajectories. Given that they look different from the abundant icy rocks in the Solar system, they might be considered as natural objects of a type never seen before, like a nitrogen iceberg or a meteor tougher than iron.

A second initiative that I lead, the Galileo Project, aims to search for objects in Earth’s vicinity that originated from another technological civilization.

If we ever find a friendly message in an extraterrestrial bottle, we might consider an interstellar initiative with partners from our cosmic neighborhood. A cosmic engineering project of mutual interest would constitute a third initiative that I would love to get engaged in. What could such a project entail? Let me give one example.

The accelerated expansion of the universe pushes extragalactic resources away from us at an ever-growing speed. Once the Universe will age by a factor of ten, all stars outside our Local Group of galaxies will not be accessible to us as they will be receding away faster than light. Is there something we can do to avoid this cosmic fate?

Following the lesson from Aesop’s fable “The Ants and the Grasshopper,” it would be prudent to collect as much fuel as possible before it is too late for the purpose of keeping us warm in the frigid cosmic winter that awaits us. In addition, it would be beneficial for us to reside in the company of as many alien civilizations as possible with whom we could share technology, for the same reason that animals feel empowered by congregating in large herds.

After writing four papers on the gloomy isolation that is awaiting us in our long-term cosmic future (linked here, here, here, and here), I received an optimistic email from Freeman Dyson in 2011 where he suggested contemplating a vast cosmic engineering project, in which our civilization – in collaboration with any viable neighboring civilizations – will concentrate resources from a large-scale region around us to a small enough volume such that it will stay bound by its own gravity and not expand with the rest of the universe.

Fortunately, Mother Nature was kind to us as it spontaneously gave birth to the same massive reservoir of fuel that Dyson would have aspired to collect by artificial means. Primordial density perturbations from the early universe led to the gravitational collapse of regions that are tens of millions of light years across, assembling all the matter in them into clusters of galaxies—each containing the equivalent of a thousand Milky Way galaxies.

Breakout Tech: Here Are Some of the Key Developments and Technologies to Watch in 2023

Thanks to that, an advanced civilization does not need to embark on a giant construction project as suggested by Dyson, but only needs to propel its avatars towards the nearest galaxy cluster and take advantage of the cluster resources as fuel for future prosperity. The nearest massive concentration of galaxies to us is the Virgo cluster, whose center is 54 million light years away. Another massive cluster, Coma, is six times farther.

For the above reasons, avatars from advanced civilizations throughout the universe might have migrated towards clusters of galaxies in recent cosmic history, similar to the movement of ancient civilizations towards rivers or lakes. In order to traverse a hundred million light years within the age of the universe, spacecraft need to exceed a percent of the speed of light. Once settled in a cluster, self-replicating probes could hop from one star to another and harvest resources just like butterflies hovering over flowers in a hunt for their nectar.

This third futuristic initiative in my resume would be an impressive feat of long-term planning. When looking at photo albums that are billions of years old, our technological descendants, most likely in the form of autonomous AI systems, might reminisce on their origin story detailing the millennia that their early technological civilization spent within the Milky Way galaxy.

Although by then, the Milky Way will be pulled away from them by the cosmic expansion at an ever-increasing speed until, eventually, its image will freeze and fade away for all eternity.