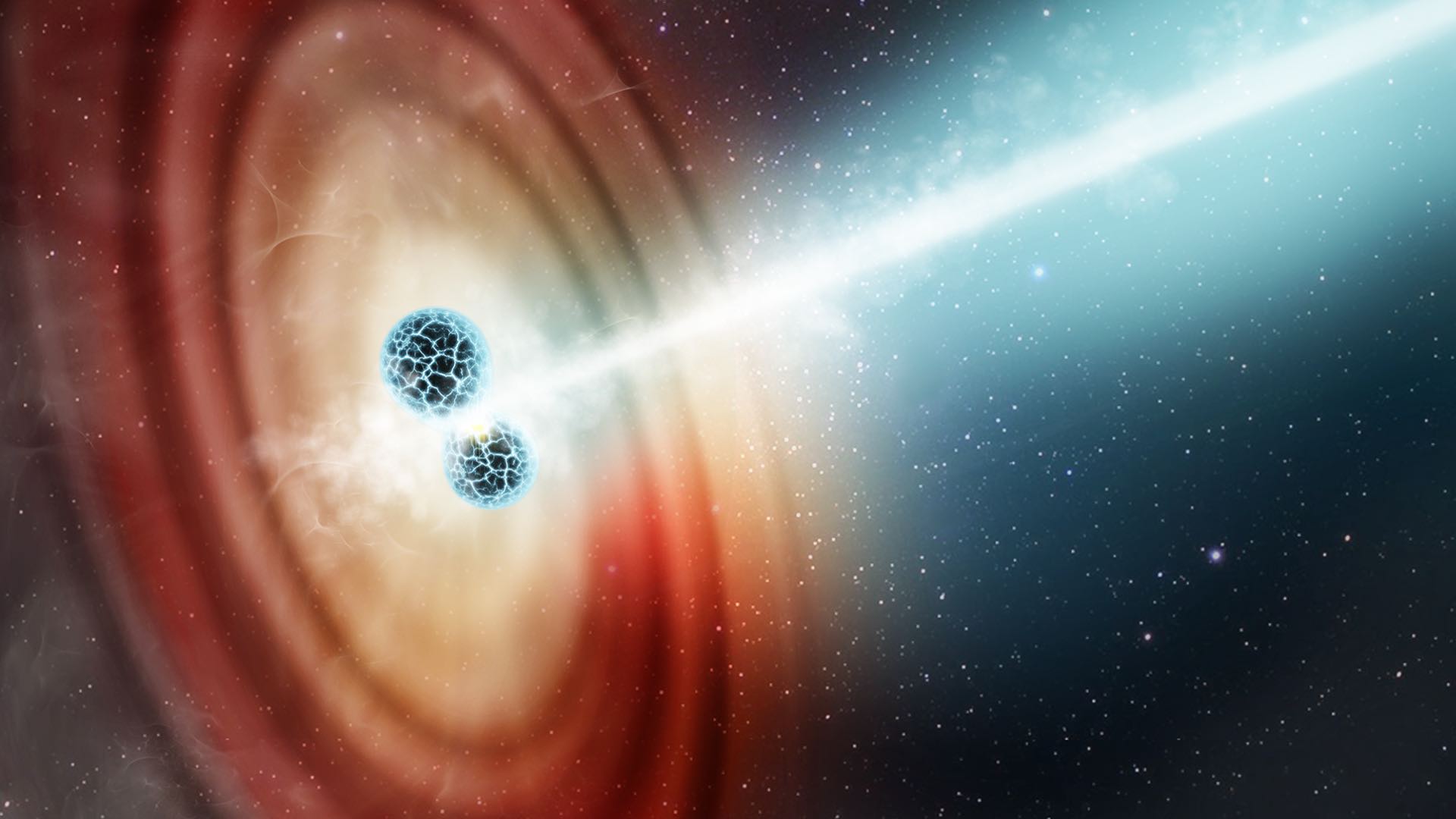 A blast equal in magnitude to a supernova explosion, caused by a “star crash” between two neutron stars, has resulted in what astronomers call a significant breakthrough in the way we study the universe.

The incredible blast, first observed in 2017, also left physicists scratching their heads for a time, as the speed at which matter was ejected from the collision seemingly defied the laws of physics.

The massive event, measured using NASA’s Hubble Space Telescope, reportedly produced a jet of matter propelled through space at a rate exceeding 99.97% of the speed of light and represents the first simultaneous detection of gamma radiation and gravitational waves.

Dubbed GW170817, the cosmic collision was first observed in August 2017, producing the rippling effect in spacetime that physicists recognize as gravitational waves. First proposed by Albert Einstein more than a century ago, these mysterious energy-laden waves that are produced through the disturbance or acceleration of a massive body in space were first confirmed in 2015.

Astronomers say that the neutron star crash, involving the cores of a pair of titanic stars that had previously been destroyed, ejected radiation traveling close to the speed of light that collided with surrounding material, a portion of which astronomers were able to observe and measure with help from Hubble.

The black hole that resulted from the collision quickly began to swallow matter around it, resulting in the formation of an accretion disc that produced spinning jets that gathered material within the blast radius. The movement of the disc, along with the material it passed through, helped astronomers narrow down the blast’s exact location.

However, as Hubble pinpointed the location of the star crash event, something odd resulted from the telescope’s measurements. The astrophysical jet being produced by the black hole seemingly moved at a velocity exceeding the speed of light by seven times. Later, data based on radio observations similarly showed velocities in excess of light speed, although now only four times faster. In both cases, the massive energy being propelled by the jet seemingly defied our understanding of physics… or did it?

The answer to this mystery can again be found in Einstein’s theory of relativity, wherein the illusion of superluminal motion arises from the jet’s motion toward Earth at a velocity very close to the speed of light. As the jet moves in our direction, and the distance between it and Earth is lessened, the light being emitted by the jet, therefore, has less distance to travel. As the jet, in effect, pursues its own self-generated light, what results is the object’s speed can be easily overestimated.

“In actuality more time has passed between the jet’s emission of the light than the observer thinks,” read a NASA statement. Thus, accounting for this, the jet was calculated to be moving slightly less than the speed of light. In other words, the astrophysical jet produces observable effects of relativity, thus making it what astronomers call a relativistic jet.

The new measurements, combined with mounting data from other similar observations, lend further weight to there being a solid connection between the appearance of short-duration gamma-ray bursts and collisions between neutron stars.

Notably, the jet produced by GW170817 observed by Hubble also represents the first time such an event has been accurately measured, which astronomers believe will further complement ongoing studies of neutron star mergers being detected by other observatories.

“This was a major watershed in the ongoing investigation of these extraordinary collisions,” read a statement from NASA’s Goddard Space Flight Center in Greenbelt, Maryland, which oversees the Hubble telescope and its operations. A total of 70 observatories around the world observed the impressive aftermath of GW17087, which was detected with instruments canvasing multiple different regions of the electromagnetic spectrum.

Astronomers say that the information gleaned from studying the blast represents a “significant breakthrough” in the field known as Time Domain and Multi-Messenger Astrophysics, a discipline that relies on the collection of data from more than one medium to study changes in the universe that occur over time. In the case of GW17087, simultaneous detection of gravitational waves and gamma radiation represent multi-medium “messengers” that help convey dynamic changes occurring in distant regions of space.

Another promising development that astronomers believe may arise from such accurate measurements of relativistic jets involves how they may lend data that could be vital in the study of the universe’s expansion and its relationship to one of the greatest lingering mysteries about our universe: the so-called Hubble tension controversy. Based on precision measurements of distant supernovae made in the past based on Hubble observations and other data, values indicating the speed of the movement of the early universe do not appear to match measurements of the modern universe as we see it today. The controversy remains one of the most debated subjects in astrophysics today.

NASA to Include Custom Alexa on its ARTEMIS Missions

However, armed with the new data, astronomers now have renewed hope that future observations of neutron star collisions could help unravel the mystery, especially considering the level of precision of the measurements that the Hubble data provides.

“I’m amazed that Hubble could give us such a precise measurement,” says Caltech scientist Kunal P. Mooley, the lead author of a recent paper describing his and his colleagues’ work.

According to Mooley, the new data “rivals the precision achieved by powerful radio [Very Long Baseline Interferometry] telescopes spread across the globe.”

Mooley and his team’s paper, “Optical superluminal motion measurement in the neutron-star merger GW170817,” was published on October 12 and appeared in the publication Nature.