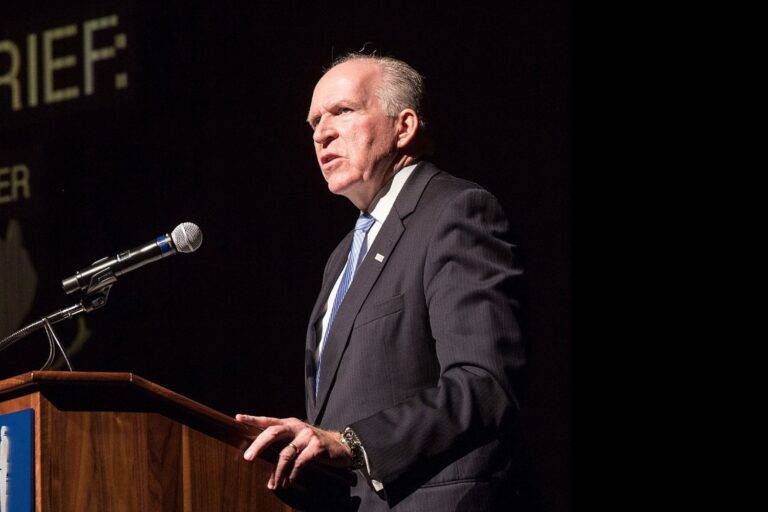 John Brennan, the former Director of the Central Intelligence Agency (CIA), appeared on Tyler Cowen’s podcast Wednesday to discuss, in part, his personal view of the UFO phenomenon and what he believes these anomalous objects may be. Though he did not provide a definitive answer, he left open the possibility that these aerial objects may not be from this planet.

BACKGROUND: Who is John Brennan?

Brennan was Director of the CIA between March 2013 and January 2017. He spent the beginning of his career within the CIA involved in the Directorate of Intelligence (DI)—the agency’s analytic branch—before running terrorism analysis at the Director of Central Intelligence’s Counterterrorist Center in the early 90s. He continued climbing the agency’s ranks, spearheading the effort that eventually led to the formation of the National Counterterrorism Center, and eventually became the interim director before retiring from the agency in 2005.

Former President Barack Obama approached Brennan in 2008 concerning the possibility of becoming the Director of the CIA. Instead, Brennan aided Obama in homeland security and counterterrorism efforts for the next four years. It would be 2013 before Obama would nominate Brennan to succeed David Petraeus in taking on the Director role.

ANALYSIS: Why UFOs Matter, according to John Brennan

When asked about how he would approach deciphering the cause and meaning behind some UFO videos recently captured by Navy pilots, Brennan stated that those videos were really “eyebrow-raising” and that the best way to navigate these uncertain waters would be to “ensure that you have as much data as possible in terms of visuals and also different types of maybe technical collection of sensors that you have at the time.”

Brennan went on to say that it is paramount to investigate whether various weather conditions could cause these phenomena or if any other ground-based phenomena could help explain what is being seen in the skies.

The videos referenced are now known as the “FLIR1,” “Gimbal,” and “GoFast,” which were released to The New York Times and Tom DeLonge’s To The Stars Academy of Arts & Sciences (TTSA) in 2017. One major player in the videos’ release was former Director of Special Projects Management Staff for the Undersecretary of Defense for Intelligence, Luis Elizondo. Before resigning from The Pentagon in 2017, Elizondo quietly ran a program looking into UFO sightings by members of the U.S. military called the Advanced Aerospace Threat Identification Program or AATIP. Since his resignation, Elizondo has been a leading advocate for more investigation into UAP, saying there is “very compelling evidence we may not be alone.” In August, the Department of Defense formally announced a task force run by the Office of Naval Intelligence was currently investigating UAP events.

Cowen followed up Brennan’s comments on the Navy pilot videos by asking point-blank: “What do you think is the most likely hypothesis [to explain UFO sightings]?”

Brennan replied that he did not know, adding, “I think it’s a bit presumptuous and arrogant for us to believe that there’s no other form of life anywhere in the entire universe. What that might be is subject to a lot of different views.”

Brennan continued: “But I think some of the phenomena we’re going to be seeing continues to be unexplained and might, in fact, be some type of phenomenon that is the result of something that we don’t yet understand and that could involve some type of activity that some might say constitutes a different form of life.”

Brennan’s appeal to his self-described agnosticism admittedly prevents him from being able to say, definitively, that these anomalous sightings are from out of this world or not. He noted that it is important to continue “discounting certain types of possibilities” in an effort to identify and authenticate these aerial sightings.

OUTLOOK: The Future of Government Interest in UAP

Brennan’s open-minded approach coincides with information The Debrief recently reported. The UAPTF has issued a series of intelligence assessments, and senior military and political leaders have been briefed on UAP. According to sources, the distribution of intelligence reports on UAP has been widespread across the Intelligence Community, including the agency Brennan formerly headed, the CIA.

The data suggests that many others within the Intelligence Community (IC) feel this same way. Evidence for such an interest in UFOs in the upper echelons of government is defined by the existence of historical projects developed to track these strange sightings, such as Project Blue Book, AATIP, and now the UAPTF.

Though there is substantial video evidence and pilot testimony to suggest there are yet to be explained objects traversing the skies, Brennan seems to imply that more data and corroboration are essential to solving the nearly 70-year mystery of UFOs.