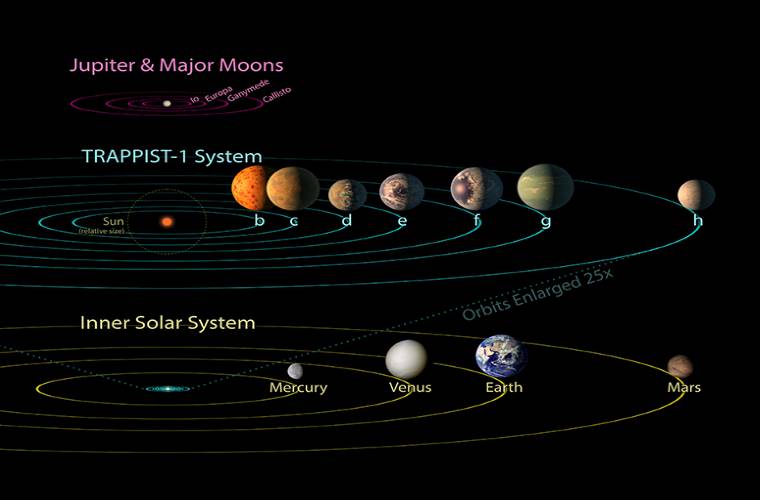 A group known as Messaging Extraterrestrial Intelligence (METI) is preparing to send digital messages to the Trappist-1 exoplanet system. Planned for October 2022, that series of broadcasts will be followed by a group of messages intended for another exoplanet system known as K2-18b. At 39 and 124 light-years away, respectively, both stellar systems contain rocky exoplanets within the host star’s habitable zone. Astronomers typically characterize the habitable zone as the orbital altitude where liquid water can theoretically exist on the planet’s surface. On Earth, liquid water is a crucial ingredient for life.

In the 1985 sci-fi novel Contact (and the 1997 film adaptation), humanity is shocked to find an alien signal broadcast to Earth. Even more shocking, the alien message opens with humanity’s first television broadcast, the 1936 Berlin Olympics, complete with a rousing speech by Adolf Hitler.

In truth, most of our EM emissions dissipate the deeper they travel into space, making the chances of an alien civilization capturing and rebroadcasting one of those early signals somewhat remote. However, humans have sent E.T. a message of their own in the form of two gold records. Mounted within the Voyager 1 and Voyager 2 probes, the discs include a series of formulas and depictions meant to effectively introduce humanity to any advanced species which may stumble upon Voyager.

Now, the folks at METI are looking to up the ante by broadcasting a signal directly at a pair of exoplanetary systems that may house intelligent alien life forms.

The target for the first METI transmission is Trappist-1. Approximately 39 light-years away, the Trappist-1 system is home to at least seven exoplanets, three of which may be rocky exoplanets housed within the star’s habitable zone.

Using the Goonhilly Satellite Earth Station in Cornwall, UK, the planners behind the METI project say they will execute the first of two powerful radio broadcasts across four different phases of the same frequency on October 4th of this year. This first phased broadcast will open with a series of distinct bursts to identify it as an artificial signal to anyone who might be listening.

Next, the powerful signal will lay out basic counting methods before transmitting a copy of the periodic table. This transmission will conclude with depictions of atoms and some 15-second-long music samples taken from the music festival that is part of the entire event.

“Astrophysicists, engineers, musicians, and producers will conduct this experiment in order to amplify humankind’s voice of accountability before the future generation and also inner aspiration for the Great Unknown,” said Otabek Suleimanov, producer-in-chief of Stihia, a non-profit project with the mission of also raising awareness about the death of the Aral Sea and attaining the sustainable development of tiny town of Muynak, located in Uzbekistan and the venue of Stihia’s annual music festival. “The radio messages consist of musical and scientific elements that will be sent to TRAPPIST-1, an exoplanet system 39 light-years from Earth, and then during the next transmission to the exoplanet K2-18b, located at a distance of 124 light-years from Earth.”

According to that same story, the music portion of the message will include a track titled “A Beauty of the Earth” by Eduard Artemyev and another titled “Journey through the Asteroid Belt” by The Comet is Coming. There will also be 15-second long mini-tracks from DJs and musicians performing at the Stihia festival.

“The Stihia music festival takes place in Muynak, where a thriving fishing industry was once located on the shore of the Aral Sea,” said Otabek. “But now that sea is a mere shadow of its original size due to numerous environmental factors and following disastrous cotton campaign policies during the Soviet era. Future water supplies to Muynak from the snow-capped mountains of the Himalayas are increasingly threatened by global warming.”

“For humanity to be around long enough to receive a reply from TRAPPIST-1, we need to deal head-on with the climate crisis today,” said Vakoch, explaining the link between the plight of the Aral Sea, the music festival, and the METI broadcast.

As far as who may receive these messages and when they might reply? Physics says it should take 39 years for the signal to reach Trappist-1, and the same amount of time if there is someone there and they decide to reply. For Vakoch, he hopes the messages are well received by these theoretical aliens, perhaps even nostalgic.

“Our messages will remind long-lived civilizations what it was like during their adolescent phase, when they were still struggling to become sustainable societies,” he said.

“We’re testing a version of the zoo hypothesis,” Vacoch concluded, “that, in fact, they are out there, they already know that we’re here, but in order to gain access to the galactic club, we have to submit an application and maybe even pay a little dues. So this is our attempt to pay our dues, and see if they’ll welcome us into the club.”