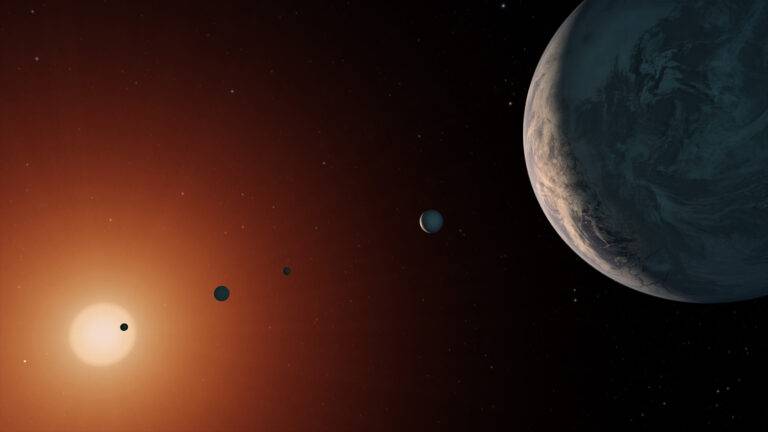 After the James Webb Telescope has reached orbit in October 2021, one of its critical missions will be to search for extraterrestrial life in the TRAPPIST-1 star system.

The James Webb Telescope’s mission extends beyond the search for life, and it will also study various stars and planets in the Milky Way Galaxy, such as Mars and Jupiter. While the telescope will change the way we look at the universe and alter our understanding of distant galaxies, one particular group of planets may alter how we perceive our place in the cosmos and even life itself.

One particular group of those studies is looking at the TRAPPIST-1 exoplanet star system in hopes of finding out not only how the seven planet system developed, but if a trio of those planets, TRAPPIST 1d, 1e, 1f, as well as another named TRAPPIST–1b, have the right conditions to harbor life.

BACKGROUND: WHY TRAPPIST-1 IS A GOOD CANDIDATE FOR ET LIFE in the MILKY WAY GALAXY?

Initially discovered in 2017, the targeted planets within the TRAPPIST-1 exoplanet system maintain extremely close orbits around their red-dwarf star, one that is much smaller and cooler than our Sun.

“Planet f is about the same size and mass as Earth,” explained Dr. David Lafrenière of the University of Montreal in an email to The Debrief. Lafrenière is one of the researchers who is helming a study of planets 1d and 1f.

“While planet d is about 80% of [planet f’s] size and 40% of its mass. Both planets are believed to be made primarily of rocks,” he explained.

This position, size, and composition make these exoplanets intriguing targets when searching for signs of life.

“There are possibly three planets in the TRAPPIST-1 system that may have conditions for habitability that will be observed by Webb,” NASA’s Dr. Knicole Colon, Deputy Project Scientist for Exoplanet Science on the James Webb Space Telescope team, told The Debrief. “Webb will look for water vapor and other molecules in the atmospheres of those planets,” hoping to determine that level of habitability.

“Given their distance from their star, the temperature at their surface could be in the right range for water, if present, to be in liquid form – rather than vapor or ice,” Dr. Lafrenière stated. “That is, these planets are located in what is called the ‘habitable zone’ around their star.”

To determine if any of these planets have the right conditions for life, Dr. Lafrenière will examine their atmospheres as they periodically pass in front of the host star. Each time this happens, he explains, the telescope’s instruments “will attempt to detect the subtle reductions in brightness of the starlight that occur at specific wavelengths as the stellar rays filter through the planet’s atmosphere while the planet passes in front of the star.”

Dr. Lafrenière further explained that molecules absorb light in unique combinations of wavelengths; these small variations can be detected and will confirm the possible presence and contents of an atmosphere. If his team sees the right signals from either planet, then they will know there is water vapor present.

Of course, this doesn’t mean that there is life on these planets, even if water is present. We know what life needs here on Earth, and that is our only working model.

“Our expectations for what a habitable or even inhabited planet might look like when viewed from a great distance are largely built on what we’ve learned in [our] solar system,” Dr. Nikole Lewis, an astronomer at Cornell University, who is part of a team studying TRAPPIST-1e explained to The Debrief.  “The TRAPPIST-1 system is very different from our Solar System, from the cool red star at its center to the seven earth-size planets in tight orbits about that star.”


Discovery May Mean Exomoons are Common, Increasing the Odds of Extraterrestrial Life.

The teams studying this star system made it clear to The Debrief that there may be a catch. The nature of the TRAPPIST-1 star system, with the targeted planets in such shallow orbits, means that all seven, even the ones in the habitable zone, may have had their atmospheres stripped away by the intense UV radiation and periodically flaring host star.

Still, these types of systems are essential targets to study when searching for rocky planets that may be in their star’s habitable zone. That’s because, as noted by Dr. Thomas Green from the NASA Ames Research Center, who is leading a team looking at TRAPPIST-1b, “There are many M dwarf stars like TRAPPIST-1, and these stars seem to have many Earth-sized planets.”

So, while each of the teams studying the TRAPPIST-1 system is looking for different things, making sure to perform each step as they go rather than prematurely reaching for any big conclusions about the right conditions for life is just as important.

“[Even] before determining if a feature is a biosignature,” explained Dr. Pierre-Olivier Lagage at the French Alternative Energies and Atomic Energy Commission (CEA), who is collaborating with Dr. Greene on his observations of TRAPPIST-1b, in an email to The Debrief, “we need to well understand the chemical and physical process at work in exoplanet atmospheres. This is a long term endeavor. We are just at the beginning.”

OUTLOOK: Are We Alone in The Milky Way Galaxy?

The telescope’s launch is still months away, and the tests scheduled are expected to deliver results only after a thorough examination and review, so it may be quite a while before we learn if the TRAPPIST-1 system, or any planet in the Milky Way galaxy harbors the right conditions for life. Still, it is an intriguing possibility and one of which the researchers are all fully aware.

“A successful detection would further reveal the bulk composition of the atmosphere, which is important information to assess the potential for life, as well as to understand the [evolutionary] history of the planet,” Dr. Lafreniere points out before ultimately conceding how groundbreaking the results of his efforts and those of the other three teams studying this exoplanet system may be. “Our study could achieve the very first detection of the atmosphere of an Earth-like planet in the habitable zone, which in itself would be a key step in the study of life elsewhere.”