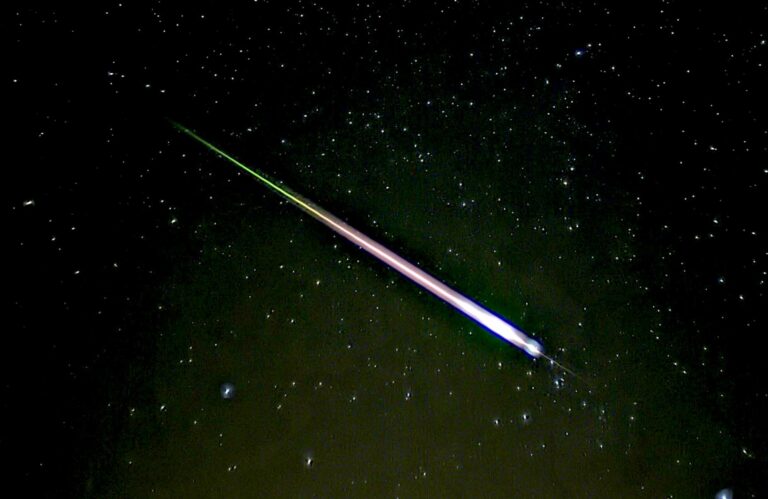 Albert Einstein famously argued in a letter to the physicist Max Born in December 1926 that God does not play dice. The letter referred to the probabilistic nature of Quantum Mechanics but it can also be interpreted more broadly as if nature does not make random choices.

In fact, it is the duty of a scientist to make sense of nature’s choices. Otherwise, reality looks random to those who do not understand it. Weather was perceived this way before satellite and ground-based data allowed modern science to make weather forecasts a week in advance. As an advanced scientific civilization, the fundamental insight we learned is that we should be guided by evidence rather than prejudice. As often imagined in mathematics or science fiction stories, the range of possibilities is far greater and sometimes has no overlap with what is actually realized in nature.

On April 6, 2022, the United States Space Command tweeted a formal letter confirming that a meteor identified in the CNEOS catalog by my student Amir Siraj and me in 2019 as originating from outside the solar system based on its high speed, is indeed interstellar. The meteor detection on January 8, 2014, predated the first reported interstellar object, `Oumuamua, by almost four years and should be recognized as the first interstellar object ever discovered. The meteor paper was initially doubted because the uncertainties in the velocity measurements were classified. The release of the confirmation letter is a watershed moment in which the government assists scientific progress by confirming the interstellar origin of this so-called CNEOS-2014-01-08 meteor at the 99.999% confidence.

Our discovery of an interstellar meteor heralds a new research frontier, in which the Earth serves as a fishing net for massive interstellar objects.  As a result of encountering Earth and rubbing against its atmosphere, an interstellar object burns up in a bright fireball. This fireball is detectable by satellites or ground-based sensors even for relatively small interstellar objects like CNEOS-2014-01-08, which was about a meter in size and created a fireball carrying a percent of the energy of the Hiroshima bomb. This size scale is a hundred times smaller than `Oumuamua, which was discovered by the Pan STARRS telescope through its reflection of sunlight. This alternative detection method allows existing survey telescopes to discover only objects larger than a football field, within the orbit of the Earth around the Sun.

There should be a million objects as small as CNEOS-2014-01-08 within that volume for every `Oumuamua-size object, but only a tiny fraction of them is seen as meteors because of the small size of our “fishing net”, the Earth. The situation is analogous to finding many more small fish than whales in the ocean. But we should also keep in mind that most meteors originate from the Solar system, but the interstellar ones can be flagged by their high speeds.

The interstellar meteor discovery is very important from another perspective. One can imagine a billion-dollar mission to land on an interstellar object like `Oumuamua and return a sample of it to Earth, similar to the OSIRIS-REx mission that landed on the asteroid Bennu and will return material from it in September 2023. But at a cost that is ten thousand times smaller, one could scoop fragments leftover from an interstellar meteor and study them in our laboratories.

The debris from CNEOS-2014-01-08 landed on the ocean floor near Papua New Guinea and it is possible to scoop them with a magnet. Once collected, we could place our hands around sizeable chunks of interstellar matter and examine its composition and nature. The ocean on site is a couple of kilometers deep, and the impact region is uncertain to within ten kilometers. But an expedition to explore this region for meteor fragments is feasible, and we are currently engaged in designing it.

The fundamental question is whether any interstellar meteor might indicate a composition that is unambiguously artificial in origin? Better still, perhaps some technological components would survive the impact. My dream is to press some buttons on a functional piece of equipment that was manufactured outside of Earth.

This gives a whole new meaning to a “fishing expedition”; in this case, one involving extraterrestrial equipment.

In February 1954, just 14 months before he died, Einstein wrote a letter to the physicist David Bohm, in which he stated: “If God created the world, his primary concern was certainly not to make its understanding easy for us.” I wonder whether our expedition to Papua New Guinea might replace the word `God’ in Einstein’s statements with the term `an advanced scientific civilization’.