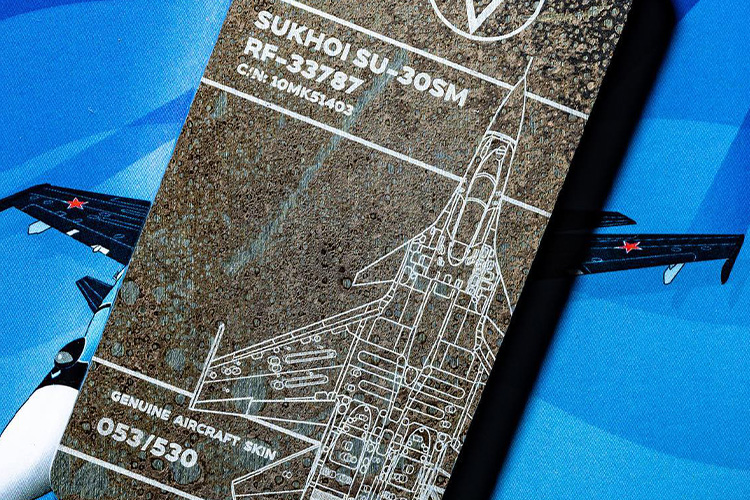 A group of enterprising Ukrainian aviation enthusiasts is selling souvenir tags made from the remains of downed Russian aircraft to help raise funds for Ukraine’s defense.

Described as “a team of young aviation enthusiasts from Ukraine who seek to find interesting retired aircraft,” Fuselage Creations has already produced limited edition tags from Russian Su-25 and Su-30 fighter jets and Mi-28 and Mi-8 helicopters that met their demise in Moscow’s ongoing invasion of Ukraine.

In an interview with The Debrief, co-founder of Fuselage Creations, Marko Gudz, explained how he and another Ukrainian friend came up with the idea to repurpose the scrapped aircraft.

“We started the project in the summer of 2020, focusing on civilian aircraft and by far not war-related products,” Gudz explained. “There are two of us in the project, myself and Andrii Koguch. We both are Ukrainian [and] are both aviation enthusiasts, and we’re treating the project as such. Mostly focusing on delivering rare, quality, and affordable products to aviation fans around the world.”

In the wake of Russia’s full-scale invasion in late February, Gudz and Koguch realized they could use their expertise and interest to help raise money for Ukraine’s defense.

“When the war began, and downed Russian aircraft started appearing at the tail end of spring, we knew what to do,” said Gudz. “It’s a shame to see this material go to waste, and as the war continues for a longer time, we decided to incentivize donations with a product. Basically, we put our skills and expertise to productive use. Or, as I call it, ‘war rails.’ We are trying to be useful to our country in such a way.”

The tags are available for purchase from the U.K.-based distributor Part-of-a-Plane, which specializes in offering limited edition tailfins and aviation tags made from the original parts of scrapped aircraft.

Each limited edition tag is numbered and stamped with the serial number and tail number of the aircraft it came from. An included backing card also offers a detailed account of the aircraft’s journey.

“We do extensive research and never release a product without evidence,” Gudz explained. “For this, I would like to thank a Ukrainian Armed forces soldier, a friend of ours, and an aviation enthusiast and historian for their extensive help and collection of facts.”

Based on the identifying information, “Blue-45” appears to have been one of 28 Su-30SM aircraft manufactured by JSC Irkut Corporation and delivered to the Russian Navy in 2018.

The Su-30SM in question was downed by a Ukrainian Buk-M1 surface-to-air missile in the Bashtanka area of Mykolaiv Oblast on March 5, 2022.

This video (below) reportedly shows the burning remains of “Blue-45” shortly after it was downed by Ukrainian air defense.

According to the Ukrainian General Staff, the aircraft was assigned to the Russian Navy’s 43rd Maritime Attack Aviation Regiment, part of Russia’s Red Banner Black Sea Fleet based at Saki Air Field in occupied Crimea.

Both pilots ejected and were subsequently captured by Ukrainian forces. According to reports, the pilots were later exchanged as part of a prisoner swap.

In a Facebook post, Come Back Alive, a non-profit organization that supports Ukrainian servicemembers said the burned-out remains of “Blue-45” lay in a field in Mykolaiv Oblast for over six months until late September when volunteers collected the remains for scrap metal.

“This trophy will be received by the charity fund, and 100% of the proceeds will go to support the Ukrainian army,” Come Back Alive wrote.

Speaking with The Debrief, Parts of a Plane owner, Luke Franklin, said the remains of the downed Russian Su-30SM have been the fastest-selling collectible tag ever offered.

“We were not expecting the sales to be that quick. We only produced the first 150 tags [and were] then expecting to follow with production in small batches,” said Gudz. “Now, we are in full swing with finishing all tags and delivering them out to the customers.”

Gudz says currently, there is a customer waiting list of almost two weeks for new tags. “They are being dispatched in batches from Ukraine to the U.K. for onward delivery, so orders may take a couple of weeks to be dispatched,” added Franklin.

However, the wait for the collectible items is likely worth it. In addition to owning an incredibly unique piece of military memorabilia, the limited edition tags could skyrocket in value with time.

For example, the twisted remains of a sliding canopy from a British Royal Air Force CAC Boomerang downed in WW2 carries a price tag of $3,000 through the online vintage aviation outlet warbird.parts. An unrecognizable metal fragment from the barrel of a German Wehrmacht Tiger I tank can cost over $600.00 on ebay.

And if the Su-30Sm isn’t to your liking, Fuselage Creations currently has a limited number of tags available for two Russian helicopters that fell in Ukraine.

These include a Mi-28N “Night Hunter,” callsign “Red-70,” that was shot down by Ukrainian air defense near the small village of Bobrivka, Kharkiv Oblast, on May 8, 2022. Tags are also available for a Mi-8 transport helicopter that was abandoned by Russian forces and later destroyed by a Ukrainian MANPAD.

A previous 555 tags made from a Su-25SM, callsign “Red-12,” have already sold out. This was a particularly intriguing offering because it wasn’t publicly known that “Red-12” had crashed until the wreckage was discovered near the village of Babinci in the Kyiv region in early June. According to the product listing, the Russian ground-attack jet was shot down on March 9, 2022.

According to Gudz, Fuselage Creations has material from other downed Russian aircraft, including Moscow’s premier multirole jet fighter, the Su-34. There are also plans to release tags from additional Russian Su-30, Mi-24, and KA-52 crashes.

“That’s only the material we currently have in our possession,” said Gudz. “We are on a constant lookout for more.”

Gudz says the group also plans to release chains made from the remnants of down Russian missiles.

Fuselage Creations uses the proceeds from sales of the collectible tags to help provide aid for Ukrainian military forces.

“We use the money to purchase vehicles (pick-up trucks, Nissan Navara, Mitsubishi L200 or equivalent) and [the cost of] shipping them to Ukraine,” explained Gudz.

“Additionally, we try to help and cover requests for clothes and military kit which can be purchased at surplus stores in the U.K. Also, we work with other Ukrainian aid groups, for example Support Ukraine London, to try to help them too. We only take 10% of the value of the tag to cover production costs.”

For those who are not interested in purchasing one of the collectible tags but still want to help support Ukraine in its fight against Russia’s unprovoked invasion, Gudz said he encourages people to consider making a direct donation to the Kyiv-based non-profit: Come Back Alive.

“As a Ukrainian, I can not stress the magnitude of a job these guys do,” said Gudz.

When speaking with The Debrief, Gudz was emphatic in his appreciation for the encouragement Fuselage Creations has received for their unique approach of using downed Russian aircraft to help support the defense of their homeland.

“We are a small company. Enthusiasts, who never expected to have such large popularity,” said Gudz.

“But we are glad, and we will do everything in our ability to help people.”

The collectible tags are available for purchase online through the U.K.-based distributor Parts of a Plane.