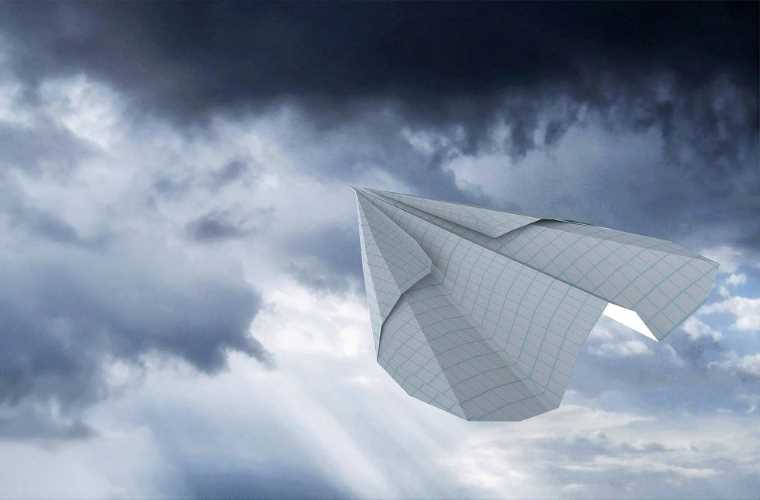 A team of researchers analyzing the flight characteristics of paper airplanes have found a whole new set of unexpected aerodynamic effects. Initially designed to understand the basic mechanics behind what makes a good paper airplane fly, the novel aerodynamic effects found by researchers may lead to the development of a whole new class of flying robots or small drones that function with very few moving parts.

What is it that makes a good paper airplane glide across a lengthy high school cafeteria but dooms other similar-appearing craft to dive straight into the floor? It’s a question that has flummoxed more than one would-be paper airline launcher and one that motivated a team of researchers from New York University’s (NYU) Courant Institute of Mathematical Sciences and Cornell University to search for an answer.

“The study started with simple curiosity about what makes a good paper airplane and specifically what is needed for smooth gliding,” explains NYU associate professor and study co-author Leif Ristroph in a press release announcing the research. “Answering such basic questions ended up being far from child’s play. We discovered that the aerodynamics of how paper airplanes keep level flight is really very different from the stability of conventional airplanes.”

CENTER OF MASS IS THE KEY

To begin their study, the research team evaluated the mathematics behind paper airplane flight. For instance, a paper airplane has no motor but instead relies on gravity for its gliding movement, much like a gliding bird.

“Birds glide and soar in an effortless way, and paper airplanes, when tuned properly, can also glide for long distances,” said study co-author Jane Wang, a professor of engineering and physics at Cornell University. “Surprisingly, there has been no good mathematical model for predicting this seemingly simple but subtle gliding flight.”

It soon became apparent that absent previous mathematical modeling, uncovering the secrets of paper airplane flight would require some real-world testing. First, the team used a basic triangle design for their paper airplane, which is considered the simplest and most efficient form. Next, the researchers placed thin pieces of copper tape on the front part of the paper airplanes, much like the paper clip used in many homemade models. The copper tape segments were placed in different locations on each plane, creating a differing center of mass.

“The key criterion of a successful glider is that the center of mass must be in the ‘just right’ place,” Ristroph explains. “Good paper airplanes achieve this with the front edge folded over several times or by an added paper clip, which requires a little trial and error.”

After numerous paper airplane launches in a laboratory setting, the team found the best weight location to maximize flight distances.

“If the weight was at the center of the wing or only displaced somewhat from the middle, it underwent wild motions, such as fluttering or tumbling,” the press release explains. “If the weight was displaced too far toward one edge, then the flier quickly dove downwards and crashed. In between, however, there was a “sweet spot” for the center of mass that gave stable gliding.”

The team mirrored these test flights by sinking a set of plates in a water tank and observing their “gliding” motion on the way to the bottom. Lead weights were placed at different locations on the plates to change their center of mass, much like the copper tape on the paper airplane.

The researchers combined all of this accumulated data to create customized “flight simulator” software that allowed them to analyze and simulate paper airplane flight. And to their surprise, they not only found out how to make a good airplane, but they also learned that the aerodynamic principles of a gliding paper airplane (or a sinking plate) were completely different from that of a conventional aircraft.

“The effect we found in paper airplanes does not happen for the traditional airfoils used as aircraft wings, whose center of pressure stays fixed in place across the angles that occur in flight,” said Ristroph. “The shifting of the center of pressure thus seems to be a unique property of thin, flat wings, and this ends up being the secret to the stable flight of paper airplanes.”

“This is why airplanes need a separate tail wing as a stabilizer,” he added, “while a paper plane can get away with just a main wing that gives both lift and stability.”

Published in the Journal of Fluid Mechanics, the study offers a unique insight into a child’s toy that nearly everyone has built. More importantly, it also found a whole new set of aerodynamic principles that the researchers believe could lead to the development of new types of hyper-efficient, specialized aircraft.

“We hope that our findings will be useful in small-scale flight applications,” concluded Ristroph, “where you may want a minimal design that does not require a lot of extra flight surfaces, sensors, and controllers.”

Unfortunately, the study did not indicate where you should write the “Do you like me? Mark Yes or No” message. SMH.