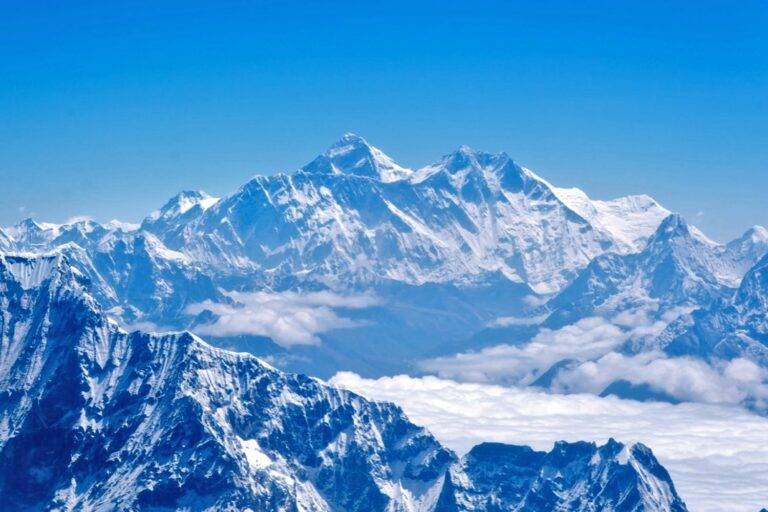 A daunting seven-week trek through snow and ever-thinning air finally placed Sir Edmund Hillary and his companion, Tenzing Norgay, at the summit of Mount Everest on the morning of May 29, 1953. Despite the time invested in reaching their destination, the pair only spent 15 minutes at the summit on account of the lack of oxygen, before beginning their descent.

Although Hillary and Norgay were the first to reach the mountain’s summit, they had not been the first to measure Everest. Nearly a century earlier, Andrew Waugh proclaimed that “Peak XV,” as it was known at the time, was approximately 29,002 feet high. His measurements, based on data collected by the Great Trigonometric Survey, had been off by only 27 feet from what would become recognized as the accepted height of Everest for the last several years. That is until recently, when China and Nepal announced a new compromise that adds an additional two feet to the height of the mountain, which now places its official height at 29,031 feet.

Famed Mount Everest isn’t the only thing that appears to be reaching new heights here lately. Support from readers of The Debrief has also continued to propel website traffic to similar altitudes, and like the thin air at Everest’s daunting upper extremities, strain on our servers has made it a bit difficult to breathe. Arguably though, this is what they call a “high class problem.”

The attention we have gleaned over the last few days also facilitated a new addition to The Debrief team: Steve McDaniel, a name which will likely already be familiar to some of our readers for his work with the SkyHub project. We want to extend a warm welcome to Steve and thank him for his hard work, which was instrumental in keeping us going throughout the first few days of our launch (along with copious amounts of black Sumatran coffee).

A brief word about Steve’s work with SkyHub is in order. Over on their website, they list the following “driving forces” behind their effort to apply science toward understanding mysterious aerial phenomena: 1) the rapid growth and evolution of machine-learning for streamlining the analysis of large data sets; 2) the increasing affordability of AI-ready hardware like the Nvidia Jetson Nano; and 3) the continuing, perplexing presence of unidentified aerial phenomenon in our skies. You can learn more about the SkyHub team and their efforts here.

Speaking of new additions, we have also been racking up fine editorial contributions from a growing pool of freelancers. In recent day’s we’ve featured work from the likes of Adam Kehoe, Ph.D., Ryan Sprague, Chris Rutkowski, and Collin Jones. We extend a warm welcome to these folks as well, and their fine contributions to The Debrief in recent days.

With housekeeping out of the way, it’s time we shift our focus toward developments in the world of defense, as well as government secrecy.

Biden’s Pick for Secretary of Defense

It has been reported recently that President-elect Joe Biden is expected to nominate retired Gen. Lloyd J. Austin III to be the next secretary of defense. Austin previously served as a military commander in Iraq, and if confirmed, would be the first African-American appointed to the position.

Austin’s nomination arrives with its share of controversy, however. This, on account of the fact that the former military commander only retired from service four years ago, whereas the required amount of time for any prospective nominee to have returned and spent in civilian life is traditionally seven years.

It would not be the first time that the seven-year rule had been broken, of course. Early in the Trump administration, the appointment of Gen. James Mattis also drew controversy for similar reasons, requiring a waiver from Congress in order to allow his confirmation. Although many lawmakers said at that time that it would be unlikely to happen again, with Biden’s current pick it appears we may already be walking a familiar old path.

Over at the Federation of American Scientists’ Secrecy News Blog, Steven Aftergood recently noted that JASON, the elite group of scientists who independently advise the United States government on sensitive issues in science and technology, appears to have survived a recent elimination attempt by the Pentagon.

A bit of background: in March of last year, it was revealed by Tennessee Representative Jim Cooper, chair of the strategic forces subcommittee of the House Armed Services Committee, that a letter was sent from the Department of Defense to the nonprofit MITRE Corporation, which managed JASON’s contract, calling for its termination. The following month, JASON lost its contract with the Department of Defense. Before the end of April, the National Nuclear Security Administration in the Department of Energy had already stepped in, offering the group an 8-month contract which effectively extended its employ in service to the government.

Following the shakeup, The Department of Defense was provided direction from Congress to continue engagement and coordination with the JASON group, in the furtherance of its long-held objectives to “defeat existential and technologically-amplified threats to national security.” Although the Department of Defense received the directive, it followed up by excluding any requests for funding for the JASONs in its current budget, after which Congress took the measure of adding $3 million for such purposes, included in the current defense authorization act for fiscal year 2021 to provide coverage for the group’s overhead costs.

Given JASON’s history of fierce independence, it is no surprise that the Department of Defense would do its best to stall the group’s efforts. As Aftergood notes, “Unlike many other government advisory panels, the JASONs insist on selecting their own members. That means that their studies cannot be skewed by appointing political allies or persons of dubious qualifications,” adding that “Their expertise and independence does not guarantee that they will be right or effective, but the JASONs offer a kind of integrity that is increasingly absent from other such panels.”

The JASONs have published a number of intriguing reports and other publications involving sensitive or disruptive technologies over the years, many of which remain classified. A few have been made publicly available however, and in closing out this week’s edition of The Intelligence Brief, I thought we might take a brief look at a few of the more interesting ones (that is, of those which aren’t classified, and are publicly available) from over the years, which the FAS has archived at their website:

That concludes this week’s edition of The Intelligence Brief. As always, if you happen to have come across this as a post at our website and would prefer to get this newsletter sent directly to your inbox, you can subscribe and get email updates from us here.