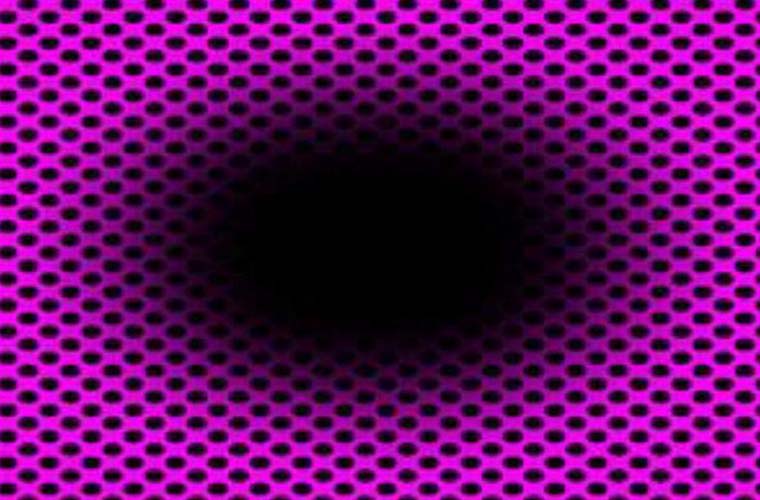 Perception is a tricky thing. Take a moment to stare at the black hole in the center of the following image.

Most people will find that the black hole suddenly appears to rapidly expand, almost as if it were devouring the tiny dots around it.

And yet, this is not a video. Nothing in the physical image has actually changed. The movement is entirely produced within the mind.

However, as new research shows, the optical illusion isn’t entirely contained within the “mind’s eye.”

In a study published last week in the journal Frontiers in Human Neuroscience, psychologists found that the black hole image produces a perception of motion and pupil dilation within the eyes.

By testing the illusion on 50 men and women with normal vision and using an infrared eye tracker, researchers found that the more significantly a participant perceived the black hole’s motion, the stronger the pupil dilation response.

“There is no reason per se that the pupil should change in this situation because nothing is changing in the world,” said Dr. Bruno Laeng, a psychology professor at the University of Oslo and an author of the study. “But something clearly has changed inside the mind.”

Is Perception an Illusion?

Optical illusions, or distortions in visual perception that appear to differ from reality, offer a fascinating challenge to the notion that “seeing is believing.” They demonstrate that our perception of reality is fundamentally based entirely on the processing and interpretation of sensory information.

The idea that perception is merely an illusion is hardly a new concept.

The Greek philosopher Plato posited over 2,000 years ago in his epic Allegory of the Cave that our reality may only be a fragment of a greater reality, based on our limited ability to perceive the world with the five senses.

A student of Plato, Aristotle put the illusion of perception into more practical terms when he wrote about the “waterfall illusion,” or when after staring at a waterfall for a couple of minutes, nearby objects appear to start shifting upwards.

Today, optical illusions have made for good viral internet memes. A famous example of this is “The Dress,” a viral photo that sparked an intense debate in 2015 about whether an item of clothing was white and gold or blue and black.

Despite no shortage of headlines proclaiming “The Science Behind The Dress Color Illusion,” after seven years of peer-reviewed academic study, there is still no scientific consensus on why “the dress” elicits such differing color perceptions among viewers.

This lack of scientific agreement isn’t limited to “The Dress” debate. As a result of their highly subjective nature, science doesn’t fully understand the underlying causes of optical illusions.

Moreover, because discrepancies are not “corrected” until they are identified by another sense (e.g., touch) or instrument, it is impossible to truly know how much of our reality is merely an illusory perception.

Intriguingly, researchers found that the perception of illusory movement from the black hole image varied among participants. In fact, 20% of participants reported experiencing little to no illusory motion, illustrating the extent to which an observer’s perception is subjectively influenced.

Magenta is an extra-spectral color, meaning it is not found in the visible spectrum of light and instead is perceived as the mixture of red and violet/blue light, with the absence of green. Because of this, researchers noted the “magenta-related effect” in the study was both unexpected and not easily explained.

One theory scientists proposed was that because magenta is primarily concentrated on two spectral bands of light – longer wavelength reddish components and shorter wavelength bluish components – it is possible that this specific spectral power distribution plays a particular role in the experience of a darkening of illumination.

Finally, instead of using a central black hole in an image, participants were tested on 19 different colored combinations, with the central hole being various colors like blue, green, red, or yellow. Ultimately, it was found that observers failed to perceive illusory motion and only had a negligible response of pupils constricting to the colored hole images.

These latest results align with a 2012 study by Dr. Laeng, in which he and his colleagues demonstrated that an image resembling the sun’s glare caused a viewer’s pupils to constrict to prevent overexposure.

Researchers theorize that the black hole illusion works because the central black hole makes viewers unconsciously perceive they are entering a dark hole or tunnel. In response, a person’s pupils dilate to try and capture more light in anticipation that the surrounding environment will become darker.

Based on past experience, the idea of entering a darkened room or tunnel would be reasonably customary. However, the concept of entering a bright yellow or green passageway would be anomalous according to ecological regularities. This would explain why participants failed to have a response to the colored-hole images.

Because it takes time for stimuli to be collected by sensory organs and then processed by the brain, we are never actually perceiving the present, but rather the world around us slightly in the past.

Researchers have suggested that phenomena like the black-hole illusion occur because our brains constantly try to “perceive the present” by predicting slightly into the future.

With the black-hole illusion, the psychological illusion of motion and physiological changes in the pupils are both uncontrollable subconscious responses.

Adding to the fascinating mystery of perception, when speaking with The Debrief, Dr. Laeng pointed out that conscious thought, absent any external stimuli, can produce similar physiological responses. For example, the awareness that you are about to go into a darkened area can cause the pupils to dilate before experiencing visual stimuli.

“We tested something similar several years ago by asking people to imagine being in a completely dark room, and we found that the pupils dilated,” said Dr. Laeng.

Ultimately, studies like the black-hole illusion only feed into the debate presented by Plato’s Allegory of the Cave. That our perception of reality is merely an illusion of a larger existence.

“It’s a very philosophical question,” said Dr. Laeng in a recent New York Times interview. “We do live in a virtual reality, but it’s a pragmatically useful virtual reality.”