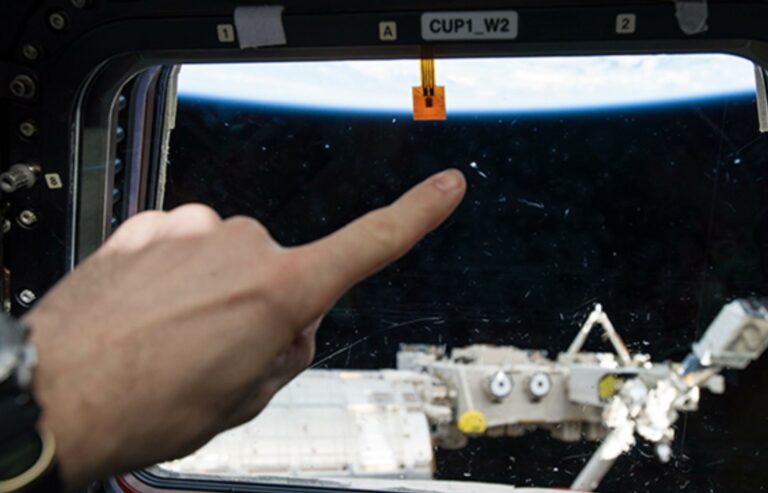 Is That a UFO? No, it’s Space Junk, and it Poses a Real Threat to Space Missions

Four astronauts who arrived at the International Space Station last Friday received a shock as they were settling in to their weightless environment. Shortly after arriving, they were told to don their spacesuits again, on account of a potential collision with a piece of approaching “space junk,” or orbital debris.

Fortunately, the situation ended up being a false alarm for the astronauts, as it turns out there had been no object after all. Lt. Col. Erin Dick with U.S. Space Command said the object once believed to be set for a close approach with the ISS had resulted from “a reporting error.”

Dick told Yahoo News that there had never been any real collision threat, and that on further review, there had been “no object at risk of colliding with the capsule.” The incident is presently under investigation, and U.S. Space Command says that further details will be released later this week as more information becomes available.

Although this latest incident involving a potential hazard resulting from orbital debris proved to be a false alarm, it highlights a growing concern for astronauts, and for future space operations in general: the threat posed by all of the junk that humans have placed in orbit around our planet.

Orbital debris, or what is more commonly referred to as “space junk,” represents a problem for a number of different reasons. As the recent close call illustrates, leftover debris from past space missions can pose a hazard on account of the potential for collisions that might damage satellites, or even crewed missions aboard spacecraft and the International Space Station.

Also, in the tradition of “what goes up, must come down,” reentry of larger space junk can also present hazards once it makes its way back into Earth’s atmosphere. In rare instances where such debris is large enough that it may not burn up entirely during reentry, the unlikely threat of debris colliding with the ground in populated areas also remains a possibility.

Orbital debris is often comprised of metallic components too, and because of this it can be highly reflective. Much like the Starlink satellites recently placed into orbit by SpaceX, astronomers complain that in some instances reflective objects can interfere with their observations of the night sky.

According to NASA, there are currently more than 500,000 pieces of space junk that are presently being tracked in Earth orbit. Some of these objects are traveling at speeds as much as 17,500 mph, which would potentially shred sensitive components on satellites, spacecraft, or the International Space Station if a collision were ever to occur.“The rising population of space debris increases the potential danger to all space vehicles, but especially to the International Space Station, space shuttles and other spacecraft with humans aboard,” a NASA page devoted to space debris and the threat it poses to spacecraft states.

“NASA takes the threat of collisions with space debris seriously and has a long-standing set of guidelines on how to deal with each potential collision threat,” NASA says. “These guidelines, part of a larger body of decision-making aids known as flight rules, specify when the expected proximity of a piece of debris increases the probability of a collision enough that evasive action or other precautions to ensure the safety of the crew are needed.”

As part of the response to issues presented by debris in Earth orbit, in 2001 the United States Government Orbital Debris Mitigation Standard Practices (ODMSP) was established. The ODMSP works to try and prevent the entry of new debris into orbit, especially objects that are deemed “long-lived” and capable of representing a potential hazard almost indefinitely.

The ODMSP says that debris can be produced in a number of different ways, which include accidental explosions during space missions, as well as the disposal of components near the end of space missions. In 2019, the ODMSP updated its practices and objectives in order to “promote efficient and effective space safety practices for other domestic and international operators.”

A “Day Without Space”: GPS Concerns May be Overblown, New Study Finds

For those interested in seeing just how much junk is currently in orbit around the Earth, a number of websites devoted to tracking and providing visual representations of space debris can be accessed online. One example is Stuff in Space, a site that provides a simple, searchable interface for tracking the multitudes of scraps from past space missions and other objects that have made their way into orbit over the years.

With little doubt, even our best efforts to curb the introduction of new debris into space cannot completely prevent new objects from entering Earth orbit. For the foreseeable future, it seems that space junk will therefore likely remain a key consideration in terms of maintaining safe operations during future space missions.