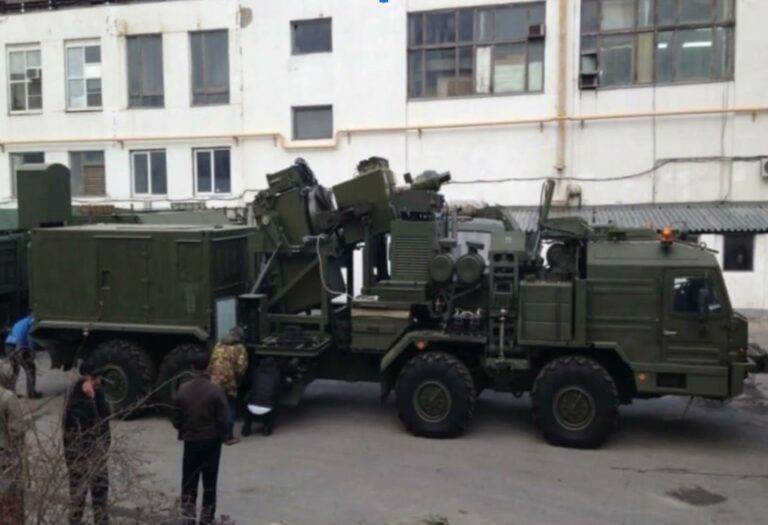 
The photos offer a first glimpse at what is believed to be the new “tactical laser,” first reported by Russian press in January.

An image leaked on social media this morning is believed to offer the first glimpse of Russia’s new secret tactical laser, designed to destroy drones and lightly-protected surface targets. According to Defense Blog, the photo was taken near NPO Advent’s St. Petersburg facility.

After first revealing the direct energy weapon, Putin said, “I do not want to reveal more details. It is not the time yet. But experts will understand that with such weaponry, Russia’s capacities for defending itself have multiplied.”

Also in 2018,  Russian news source Interfax claimed the RF Ministry of Defense had developed a plane-mounted, direct energy anti-satellite weapon. Western defense experts have been skeptical of these claims and so far there is no evidence that such a weapon exists.

In December of 2019, Russia announced it had deployed Peresvet laser systems to Syria for operational testing. The following June, the Federation’s Ministry of Defense claimed the combat laser had successfully downed an Israeli reconnaissance drone in southwestern Syria.

The air defense system reportedly uses a chemical oxygen-iodine laser (COIL) similar to the one used with Boeing YAL-1 airborne laser developed by the U.S. Air Force in 2004, before being canceled in 2014.

One issue with direct energy air defense systems involves the fact that adverse weather including fog, rain, or snow can interfere with the passage of the laser beam.

Another shortcoming that defense experts have noted with Russia’s laser weapon is that it requires considerable amounts of electricity, making it a less than ideal mobile air defense system.

Are Incels the Future Face of Terrorism?


The Radicalism of Extremist Nihilists

Up to now, all photographs of Peresvet have shown the system mounted at the rear of a trailer towed by a KamAZ 65225 6×6 truck chassis.

The photo leaked today is believed to be the new “tactical laser,” first reported by Russian press as being in research and development in January 2020.

If indeed the leaked image shows Russia’s new tactical laser, it would represent a far more mobilized form of the Peresvet, with the system appearing to be mounted on a BAZ-6909 special wheeled chassis. This same chassis is used with numerous Russian artillery and missile vehicles including the S-400 air defense system.

According to Defense Blog, Russia’s new tactical high-energy laser system is reportedly capable of “detecting, tracking, hitting air targets and incinerating enemy drones at a distance of up to 5 km.”