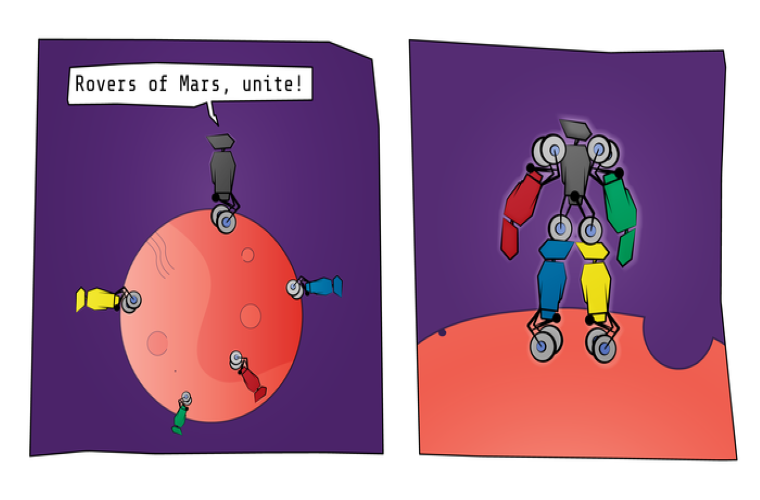 Two-wheeled Martian rovers designed to work independently and as a team may one day search the planet’s surface like a swarm of AI-bikers. The change from a single rover model, like NASA’s Curiosity or Perseverance missions, to an AI-controlled multi-rover model echoes a more significant trend toward automated robotic swarms across numerous scientific and military applications.

Since the first rover Pathfinder landed on Mars in 1997, NASA and the world’s other space agencies have planned those rover missions around single, six-wheeled vehicles. Perseverance was the first to inch away from the single-vehicle model by bringing the robotic helicopter Ingenuity along for its various explorations. However, Ingenuity is mostly a proof of concept and has been tasked with very few science objectives beyond its own operations.

A team of researchers is looking to challenge the current one-rover model, one they say is woefully inefficient by 2022 standards, with a new modular multi-rover design that sounds right out of a Transformers movie.

A SWARM OF ROVERS COULD DRAMATICALLY INCREASE MISSION EFFICIENCY

According to a press release announcing the newly published paper, “a Mars mission could accomplish more in the same timespan if it consists of several variously equipped robots simultaneously carrying out separate tasks at different locations and occasionally coming together for more challenging tasks.”

Think of a transformer robot that can operate as one large vehicle or break up into four separate vehicles to carry out individual science missions. In this case, the vehicle proposed by researchers from the Skolkovo Institute of Science and Technology (SKOLTECH) consists of four independent two-wheeled robots that can work together or in teams.

According to the same release, that “approach will enable longer exploration missions that gather more information about the planet’s history, potential habitability, and possible traces of surface water or prior life.”

“This is basically an optimization problem: How do you maximize exploration time and distance covered without driving the cost of the mission through the roof?” said Skoltech Ph.D. student and the study’s first author Alexander Petrovsky. “We found that using one six-wheeled rover can be suboptimal. According to our calculations, four two-wheeled machines are the best way to go. Each would carry unique research tools with only the critical payload present in all four modules.”

The researchers also point out that this design could increase the lifespan of a mission. If one module fails, the others can continue operating. Depending on communication configurations, even one module of the four could continue to perform science after the other three have ceased to function.

Although their design is promising, the research team concedes that one particular issue still stands in the way.

“Basically, reduced stability is the main drawback (of a two-wheeled design), with all the other parameters we considered looking reasonably good or better for the swarm rover scenario,” said Petrovsky. “That said, two-wheeled robot technology has come a long way toward making those things more stable than they used to be, so even that is somewhat less of an issue now.”

ROVERS COULD SWARM THE MOON OR EARTH

Even if their proposed design doesn’t end up on a future space agency mission, the researchers are confident that the overall AI swarm concept represents the future of robotic planetary exploration.

“Artificial intelligence technologies supervising the swarm of mobile robots will open the doors to a new technological level of planetary exploration,” said Petrovsky.

He also noted that his design could function on the Moon or even right here on Earth.

“In July 2021, we did some field tests with small two-wheeled robots on crops in Krasnodar, Russia,” he said, noting that his robots could help maintain crop health and aid in pest detection.