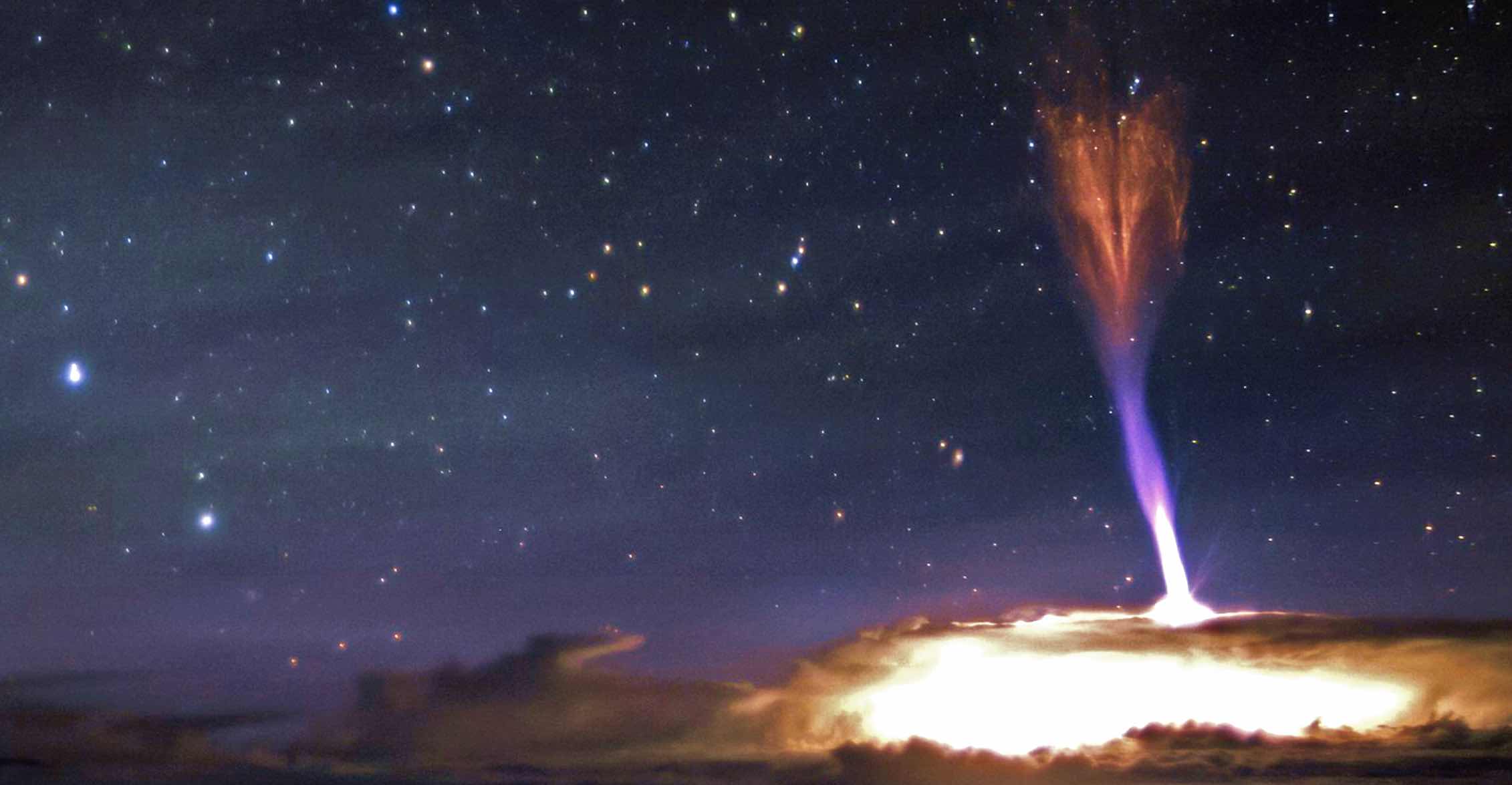 In 1730, German historian and public law theorist Johann Georg Estor had been exploring the southern Rhine-Main-Area near Darmstadt, Hessen, while conducting research for a book on the geography of the region. As Estor would later write, one of his instructors had advised that he be on the lookout for what he called coelo tristi, meaning “sad heaven/sky.”

As he later detailed in a note appearing in the second volume of his Neue Kleine Schriften, Estor traveled by horseback to the top of one of the highest mountains along the Upper Hessian Ridge, a course which brought him through a thundercloud near the mountain’s peak. Making his way through the storm and onto the ridge above it, Estor was treated to a vista of blue sky above the thunderstorm, which rolled beneath him “like a white sea.” As he looked out across the storm, Estor reported observing lightning being released upward from the clouds, as well as from beneath them toward the Earth.

Today, Estor’s account is recognized as the earliest known recorded observation of a variety of phenomena which are today called Transient Luminous Events, or TLEs. More than a century later, in 1886, scientists Joseph Toynbee and Morell Mackenzie logged a similar sighting, followed in 1956 by a possible observation by Nobel laureate C.T.R. Wilson, who decades earlier had postulated that electrical manifestations could indeed occur in the upper atmosphere.

It wasn’t until July 6, 1989, that scientists with the University of Minnesota, quite by accident, managed to capture the first known image of a largescale electrical discharge above a thunderstorm. The phenomenon would subsequently become known as lightning “sprites,” a not to the ephemeral reputation of the mythical creatures from which their name is borrowed.

Not all storms appear to exhibit sprites, although they have been observed in a variety of weather formations that include hurricanes. Today, although additional data and images have continued to be collected about sprites, like other uncommon phenomena associated with lightning, their fundamental cause remains unknown.

Now, in order to get to the bottom of the mystery, a new NASA citizen science project is aiming to get the public involved in helping harvest new information about sprites and other similar Transient Luminous Events that have long perplexed atmospheric scientists.

The project, dubbed Spritacular and led by Burcu Kosar, will aim to help bring together photographers whose imagery of TLEs may be useful in helping understand these phenomena with scientists eager to study them.

The effort is led by researcher Burcu Kosar, an expert in atmospheric and space physics with a background that includes experience collecting and analyzing “non-traditional citizen science data” for use in creating models of upper atmospheric discharges. Kosar, who obtained her Ph.D. in physics from the Florida Institute of Technology in 2015, wrote her dissertation on the theory behind sprite streamer formation and propagation.

Now, Spritacular aims to create a database from observations shared by participants, which will form the basis of what Kosar says will be the “first-ever event catalog of TLEs that will greatly contribute to advancement of scientific studies.”

Despite their puzzling nature, Kosar says that data collected about sprites and other TLEs have helped reveal a few key characteristics about their appearance.

“Every sprite event has an associated parent lightning strike,” Kosar says. “Therefore, a large database can lead to a broad statistical study on understanding the relationship between properties of lightning flashes and physical and optical properties of sprites.”

Perhaps one of the more intriguing correlations that current data has yielded about lighting sprites involves their appearances concurrent with the detection of gravity waves.

“Citizen scientists frequently capture sprites and gravity waves concurrently,” Kosar told The Debrief. “Analysis of these events can help understand the connection between the two phenomena since it has been speculated in scientific literature that gravity waves may be seeding sprite initiation in undervoltage conditions.”

Kosar says that within just the last two decades, access to better-quality cameras has helped to fuel citizen science efforts like Spritacular, because a greater number of people are now equipped with key technologies once available only to specialists, which can be used to collect data on TLEs. Spritacular will work to facilitate collaboration between researchers studying the phenomenon and those citizen scientist photographers who collect and provide their data.

“With Spritacular project, we will generate the first crowdsourced database of sprites and other TLEs,” Kosar told The Debrief. As more data is obtained, Kosar says that she hopes to develop new software that will help Spritacular process and analyze submissions by users with existing information in databases related to lightning and thunderstorms.

Overall, Kosar believes the data Spritacular collects “will serve as an invaluable resource for researchers allowing them to find interesting cases, perform studies in conjunction with other scientific data, and conduct broad statistical studies.”

Every photo of a lightning sprite or similar TLE that is submitted to Spritacular will be reviewed by scientists, and those whose images lead to new scientific discoveries will be acknowledged for their contributions and may even be listed as co-author on any resulting studies or other publications.

Those interested in participating in the project can learn more about Spritacular at the project’s official website.