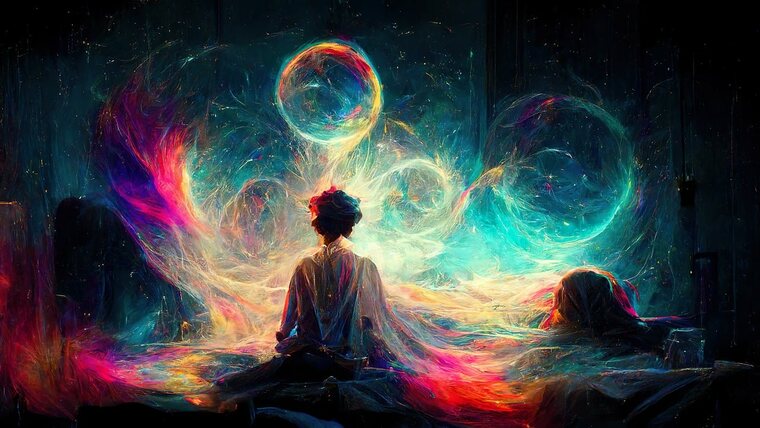 A Bold Solution To a Quantum Mystery: Does a “Game” Between Observer and Nature Define Existence?

A team of scientists from the University of Sciences and Technology of China has proposed a bold solution for the “measurement problem” in quantum mechanics, suggesting the eventual outcome for states of existence is determined by a “game” between the observer and nature.

For over a century, the quantum realm has imposed an abundance of bizarre obstacles along the road to understanding universal existence.

In the microscopic world of atoms and subatomic particles, nature demonstrates unparalleled strangeness, becoming unpredictable and operating in contrast to how it behaves at the macroscopic scale defined by classical physics.

For example, as the famous “double-slit experiment” demonstrates, particles, such as electrons, atoms, and molecules, can simultaneously display characteristics of both waves and particles.

Behavior in the quantum realm is so strange and counterintuitive that Albert Einstein never entirely accepted the theory, famously calling quantum entanglement, or the linkage of particles in such a way that measurements performed on one particle seems to affect the other, “spooky action at a distance.”

And yet, as the director of the Fermilab Center for Particle Astrophysics, Dr. Craig Hogan, points out, this bizarre world which operates much differently from the one we experience through our raw senses, ultimately represents the very fabric of existence.

“Literally everything is made of quantum stuff. So understanding the quantum world is really about understanding everything,” Dr. Hogan explained in an interview with The Debrief.

When it comes to understanding the quantum realm, physicists have long been vexed by a seemingly impenetrable mystery known as the “measurement problem.”

Now, a team of Chinese scientists is proposing that maybe the solution to the measurement problem is really all just a “game” between us and nature.

A Cat That’s Dead and Alive

The most widely accepted set of principles in quantum mechanics is known as the Copenhagen Interpretation.

A core principle of the Copenhagen Interpretation is the concept of quantum superposition, which states quantum waves simultaneously exist in all possible states until they are observed. Once observed, a quantum wave will abruptly transform into a single-state particle.

The paradox of quantum superposition is most easily understood by the well-known thought experiment by Austrian Nobel-prize-winning physicist Erwin Schrödinger.

In the “Schrödinger’s Cat” scenario, suppose you placed a cat inside a sealed box for one hour with a container of radioactive material, a Geiger Counter rigged to a hammer, and a container of deadly cyanide.

Ultimately, when you open the box, the cat will either be dead or alive based on the 50/50 chance that radioactive decay did or did not occur.

However, since the cat is taking the place of a quantum system in this example until it is observed, the cat will simultaneously exist in two separate, distinct states. Essentially, until the box is opened, the cat is both dead and alive.

Schrödinger’s thought experiment aimed to demonstrate how absurd quantum systems behave compared to the larger world we interact with daily.

In the “real world,” a cat cannot simultaneously be dead and alive. However, at the microscopic level, quantum systems can and do exist in such distinctly divergent states.

And yet, as Dr. Hogan pointed out, “Literally everything is made of quantum stuff,” which leads to a significant and unsettling mystery about the true nature of existence.

How or why does “quantum stuff,” with apparently limitless potential and not bounded by time and space, abruptly transform into the defined matter that makes up our observable universe?

A Playful Solution To a Quantum Mystery

For nearly a century, quantum theory has been tormented by several lingering questions. What causes a quantum wave to collapse and take on a defined state? How or why is a particular end state selected, and what role does the observer play in the process?

This constellation of persistent riddles has been summed up into one inscrutable dilemma known by physicists as the “Measurement Problem.”

Pioneering quantum physicists like John Von Neumann and Eugene Wigner theorized that human consciousness influenced a quantum wave’s collapse. This theory has been largely rejected by modern physicists, as many experiments have proven that an “observer” does not need to be a sentient human being.

Any physical object, such as an inanimate measuring device or another subatomic particle, can act as an observer. So long as the “observer” interacts energetically, a quantum system will lose its wavy state and transform into a particle.

In this recent paper, researchers from the University of Sciences and Technology of China likewise theorize that human consciousness does not play a role in a quantum wave’s collapse. However, an observer must interpret measured results or “play the game.”

The scientists propose a quantum decision approach for the measurement problem, suggesting that observing quantum properties is like playing a “game” with nature.

“Nature makes his ‘choice,’ and the observer’ bets” on it,’ researchers wrote. “In other words, an observer has to make a decision under uncertainty with incomplete information regarding nature’s ‘choice’; through this learning process, the observer gradually builds up his (her) own experience of nature in his (her) memory for future decision-making.”

In this version, a hypothetical cat is locked in a box with a lamp for one hour. If the lamp is on, the cat is alive. If the lamp turns off, the cat dies. A digital “coin” is flipped within the hour to determine the status of the light, with heads meaning the lamp stays on and tails it turns off.

To win the game, a simulated observer must correctly choose whether the coin landed on heads or tails and whether the lamp has turned off or stayed on.

Because of nature’s inherent uncertainty, for a single game, an observer cannot establish any objective probability and must subjectively guess whether the lamp is on or off.

However, during repeated game simulations, researchers say an observer can increase the odds of choosing the correct outcome beyond a mere 50/50 chance.

That Rattlesnake You Hear Is Not As Close As You Fear

Researchers suggest that by continuously playing the game, an observer can maximize their chances of success by discerning the frequency pattern for the two different outcomes through a process called “quantum expected value decision theory.”

“In other words, it is possible that the observer can have a reasonable expectation of the natural state by learning historical results of repeated measurements on copies of the same system,” wrote the researchers.

More broadly, the theory suggests that our continuous observations of nature and historical understanding of outcomes influence a quantum wave to break down and take on a defined particle state.

Through computer simulations, researchers say they could reconstruct the “trajectories,” or historical data, with 70% accuracy, up from the expected 50% probability of the chance coin flip.

Because the simulated observer was only used to predict a set number of unknown outcomes, physicists note their theory falls short of providing a comprehensive solution for the quantum theory’s measurement problem.

“It seems that nature is indeed playing games with us, and it is impossible to accurately predict the future trajectory of quantum entities unless we can ‘dance’ with nature. Can we?”

The idea that existence is defined by a “game” between us and nature is an intriguing thought. However, ultimately proving this theory true goes back to that same enduring mystery.

How do you objectively observe these processes, given that measuring them means you’re already playing the “game?”

During a 1964 lecture on quantum behavior, preeminent theoretical physicist Richard Feynman once described this question and the “measurement problem” as quantum mechanics “only mystery.”

A mystery that, if solved, could not only pave the way for understanding quantum mechanics but our entire existence.

Until then, as Feynman also famously chided, “I think I can safely say that nobody understands quantum mechanics.”

A preprint review of “Quantum measurement: a game between observer and nature?” was published by arxiv.org.