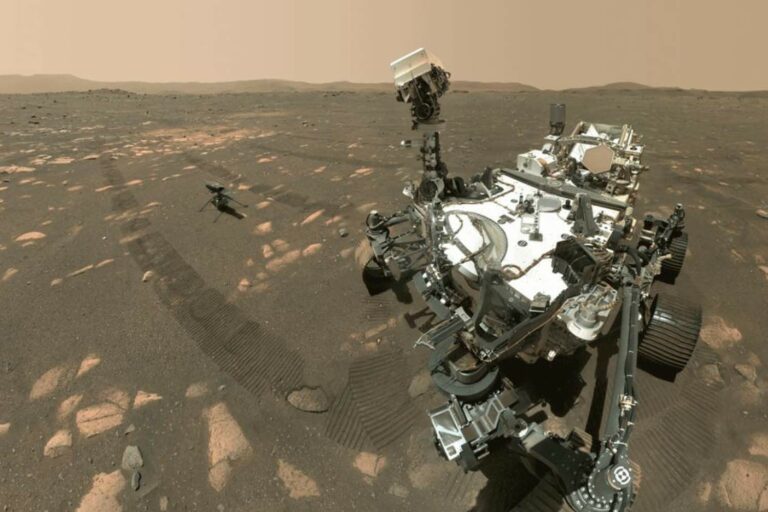 With its most recent successful mission above the rocky Martian terrain, NASA’s Ingenuity helicopter has logged its twelfth flight over the red planet, according to NASA.

The flight, which occurred on Sunday, clocked in at around just 169 seconds. However, with each successful takeoff and landing Ingenuity becomes a greater asset in its supporting role to the Perseverance rover, which made its historic arrival on Mars earlier this year.

In its most recent flight, Ingenuity was continuing to aid in the search for Martian topographical features the Perseverance team calls raised ridges, like in previous flights. However, according to Teddy Tzanetos, Ingenuity Team Lead and Chief Pilot at NASA’s Jet Propulsion Laboratory, the flight that marked a dozen for the only helicopter on Mars was significant for other reasons. Namely, this has to do with a newly enabled function aboard Perseverance which allows it to autonomously travel to meet the helicopter at its landing sights.

“Thanks to its newly enabled AutoNav capability, Perseverance is quickly moving northwest across the southern ridge of Séítah (white path) and will meet Ingenuity in the coming days,” Tzanetos wrote in a Status Update at NASA’s web page devoted to Ingenuity’s operations.

“As a result, the timing of Ingenuity’s Flight 12 is critical,” Tzanetos added.

According to the plan for Sunday’s flight, once it reached an initial altitude of 10 meters, Ingenuity had been programmed to fly toward the northeast in the direction of Séítah, where the helicopter performed a 5-meter “sidestep” maneuver that allowed it to get side-by-side images of terrain below, which the JPL team could then use to create a 3D image of this region. Once the images were obtained, Ingenuity returned to its initial launch location.

In addition to the pair of images obtained while sidestepping the Séítah region, NASA’s Ingenuity helicopter obtained a total of 10 color images that, according to Tzanetos, “we hope will help the Perseverance science team determine which of all the boulders, rocky outcrops and other geologic features in South Séítah may be worthy of further scrutiny by the rover.”

Although Sunday’s flight went according to plan, it came with certain risks. Ingenuity is primarily designed to operate with flat terrain similar to that within the Jezero crater where Perseverance touched down a few months ago. By contrast, the Séítah region, which the NASA team calls a “geological wonder” for its varied and rocky composition, could potentially present challenges for Ingenuity by nature of its design.

This, in addition to the fact that in previous test flights, Ingenuity’s rotorcraft has weathered a few minor technical problems, none of which have significantly impeded operations.

With the success of Sunday’s flight, Tzanetos hopes that NASA’s most recent gamble will have a correspondingly high pay out.

“When we choose to accept the risks associated with such a flight, it is because of the correspondingly high rewards,” Tzanetos wrote.

NASA’s Ingenuity helicopter made its first successful flight on April 19, during which it climbed to an altitude of approximately 3 meters above the ground, hovered briefly, preformed a simple turn, and then landed again. Despite the simplicity of the brief demonstration, it represented the first powered, controlled flight of an aircraft in the thin atmosphere of Mars, and thereby the first such flight performed on any planet beyond Earth.

Additional flights throughout the summer of 2021 have expanded Ingenuity’s range across the Martian surface, as well as its altitude. Since the helicopter’s sixth flight, it has been in its operations demonstration phase, where its current mission comprises “exploring how aerial scouting and other functions could benefit future exploration of Mars and other worlds.”

“Knowing that we have the opportunity to help the Perseverance team with science planning by providing unique aerial footage is all the motivation needed,” Tzanetos wrote.