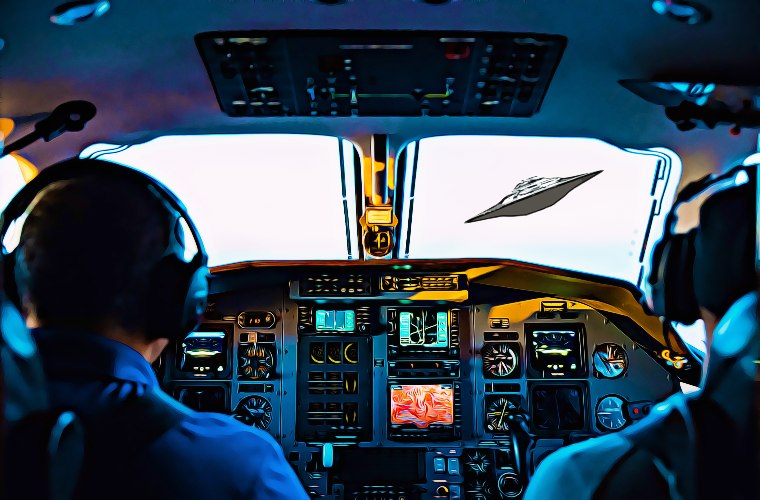 Since the Department of Defense (DoD) released the Unidentified Aerial Phenomena Task Force’s preliminary findings in June of this year, science-minded groups like the National Aeronautics and Space Administration (NASA) and Harvard University’s professor-led Galileo Project have joined the effort to explain encounters with unidentified aerial objects increasingly reported by both military and civilian pilots.

Unlike the DoD, which is studying these events for threat identification purposes (something the US military has done on and off since 1947) or NASA and Galileo, who are both looking into the issue for scientific reasons, the August 6th panel that took place during the AIAA’s annual convention had a much more prosaic concern in mind: crew and passenger safety.

“We need everyone’s help on this, and we just do it in a way that is transparent,” said former US Navy Pilot Ryan Graves, one of the six panelists to speak at the safety session and a first-hand witness to the UAP phenomenon. “Because, at the end of the day, you know, like I said, very pragmatically, you know, we’re flying around objects out there at hundreds of miles an hour with people’s families on board. It’s just a matter of time, frankly [before we have a collision]. I’m surprised it hasn’t happened already.”

Alongside Graves, the session’s five other speakers included Dr. Ravi Kopparapu, a NASA Goddard Space Flight Center scientist, Dr. Kevin Knuth, an Associate Professor of Physics at the State University of New York (SUNY) in Albany, Peter Reali, an electrical engineer and Board Director of the Scientific Coalition of UAP Studies (SCU), Ted Roe, the Director of Research at the National Aviation Reporting Center on Anomalous Phenomena (NARCAP), and Philippe Ailleris, a veteran Project Controller for the European Space Agency (ESA).

Ed Stanton, Chair of the AIAA’s Air Traffic Management Integration Committee, moderated what would turn out to be a nearly five-hour session, highlighting the need for his committee and the entire association to take this emerging safety situation seriously.

“Professional conduct will be expected in this session,” declared Stanton at the day’s open. “Comments or questions that are outside of this will neither be tolerated nor permitted.”

Given the panel’s positive reactions, it was a welcomed message from the committee chair of such a staid, scientifically minded organization like the AIAA, and one that set the tone for the serious and often riveting discourse that would follow.

Dr. Kopparapu was the first to speak, leading off with a general discussion about the phenomenon’s history from a scientific perspective while also noting that “this is my first time attending an aeronautics conference.” Like Stanton, Kopparapu kept his message on point with potentially verifiable mathematical principles, periodically stating he wasn’t interested in explanations that relied on “exotic physics.”

Kopparapu was followed by Dr. Knuth, whose talk covered the potential real-world physics behind the unusual flight characteristics described by UAP observers dating back to the 1940s. Knuth’s talk mirrored many of the points made in his 2019 paper on the same subject, including a lengthy analysis of past and present cases. Like Kopparapu, the physics professor focused much of his discussion on the efforts made by scientists back in the 1950s and 1960s who were trying to explain what military and civilian aviators of that era were reporting. Also, like Kopparapu, Knuth noted how much of this data was recorded before there was a stigma attached while also outlining steps that can be taken in the future to help that stigma go away.

Following a riveting presentation by Graves, who once again recounted his own UAP experiences as well as those conveyed to him by his fellow aviators (including some unnamed US Air Force pilots), the SCU’s Reali focused his time on the 2004 USS Nimitz UAP incident.

More commonly known as the Tic Tac incident, Reali’s recounting included a range of calculations done by his SCU group concerning the physics-defying descriptions of the craft’s movements purportedly captured on RADAR, as well as a discussion of the effects on the surrounding environment such extreme movements should have caused. Like previous presenters, Reali’s talk focused heavily on science and data, calling for an increase in both going forward.

NARCAP’s Director Roe gave a much broader analysis of the phenomenon, including highlighting his organization’s collection of witness accounts that date back to 1916. Roe also offered a harrowing account of an orb of light he personally witnessed up close when visiting a site where he was told others had seen similar things.

Another particularly interesting moment came when the NARCAP director discussed the occasional reports of electromagnetic (EM) interference purportedly caused by UAPs. Specifically, he noted that in all of the 57 cases on file with his organization where EM effects were connected to a UAP sighting, the crafts were all described the same way, as balls of light.

When asked by The Debrief to restate that statistic, Roe said, “all fifty-seven of the cases where pilots recorded concurrent failures of onboard electrical systems, as reported during the UAP incident, described the UAPs as balls of light.” When pressed further by The Debrief for clarification of this seemingly significant point, Roe repeated the claim. “We have no data that we’re detecting electrical interference from any of the other UAP.”

In response to another attendee’s question, Roe addressed historical reports of crashes potentially caused by UAPs, including possible collisions with “flying saucers.” He concluded that many such reports exist, but none have enough data or independent confirmation to be accepted as actual fact.

When asked by The Debrief if he also supported efforts to re-task satellites to look for UAP, he indicated that there was more than enough high-quality data in existing photographic databases to conduct a thorough search while avoiding the costs and complications associated with re-tasking a satellite.

“We have to take advantage of what is available,” Ailleris told The Debrief. “We have to retrieve the data from the existing databases.”

When asked about the idea of trying to launch a dedicated UAP searching satellite rather than using those already in orbit, Ailleris reiterated the simplicity of his approach. “I don’t advocate for building a separate, dedicated detection system.”

In his conclusion, the ESA’s project manager listed several satellite archives, including some held by his current employer, that he says have vast databases of high-resolution images of Earth’s atmosphere that are ripe for study. Throughout his brief yet thoughtful presentation, Ailleris made sure to note that his work in this area is not connected to his work at the ESA, but is purely one of personal interest.

Following the individual sessions, the final scheduled presentation once again fell to Graves, who, as mentioned, had been chosen by his fellow panelists to speak for the group. In that capacity, he presented the AIAA and its legions of members who will have the opportunity to view the session on video, with a set of formal recommendations.

First, Graves explained that the DNI report indicated that some UAP are real objects. Scientifically studying them should not be stigmatized. He recommends additional sessions introduced within key science/aerospace meetings. He also expressed the need for a panel of experts from different disciplines to identify needed data collection methods and instruments.

Secondly, he proposed a Civilian Scientist Panel responsible for curating unclassified data for public consumption & understanding. This panel would ensure any scientific data or discoveries were available for peer review.


The 44th President of the United States recently defended the use of drones in military operations while he was in office, and keeps us guessing about UFO briefings.

To UFO, or not to UFO

Although not part of the formal recommendations, the panel did discuss the pros and cons of including ufologists in any future efforts. While most noted the concerns with stigma issues, they all agreed that it is standard practice in any scientific undertaking first to understand the historical context of the phenomenon to be studied before actually conducting said study.

“I understand that scientists don’t want to get into that,” noted Dr. Knuth during the session’s final Q & A. “But the problem is that scientists haven’t studied this topic for 75 years. We’ve known about these things for 75 years, but it has not been scientifically studied. And that’s left a vacuum [where] pseudoscientists come in.”

After a brief pause, Dr. Knuth furthered this point.

“The fault lies with the scientists who haven’t studied it. And at this point, the only people who know anything about this are the ufologists who’ve been studying the pseudoscientists. So, if you want to get jump-started, if you want to get some idea of what you’re dealing with, which is one thing you have to do before you just go out there and look with a telescope, you have to get some idea of what people think they know. So you have to look at someone for that expertise, even though it’s not the expertise that you’re hoping for.”

Many panelists and attendees seemingly agreed that having at least one or two select “UFO experts” on the team would probably do more good than harm.

A lot of scientific material and historically collected data were covered in each presentation, and each presenter clearly spent significant time and energy putting their talks together. As a result, the entire gathering seemed to come off as hoped; a sober, rational discussion by scientists and engineers, as well as one particularly impressive pilot, centered on a handful of crucial components.

This phenomenon is real, it is a safety issue, more and better data is needed to understand what is occurring, and a stigma-free environment is as critical as anything to making that happen.

As an attendee, the biggest surprise was just how mundane and refreshingly similar this panel was to every other AIAA technical session. It had aviators, scientists, and engineers all discussing their subject as soberly and considered as if they were trying to figure out how to assess and improve a flight crew’s workload (an actual panel at this same conference).

Finally, it seemed that at nearly any other time, the single largest group of aerospace and aeronautical engineers hosting a session on UAPs and safety would have almost surely made headlines, many of which would have just taken the opportunity to mock the phenomenon with snarky takes and X-Files theme music.

However, in a world where the DoD, NASA, and a sitting Harvard professor are all joining the hunt to understand the numerous reports of objects in our skies whose shape and performance often seem to defy conventional explanations, this session on UAP and flight safety came off as both incredibly poignant and incredibly ‘normal’ all at the same time.

And unsurprisingly, just like the entire dry-yet-riveting session, the down-to-earth Graves seemed to sum the panel’s goals the best.

“We all would like to see a reality where this is a problem that everyone is working on,” he said near the session’s close. “And that when a conclusion is drawn, it is done so in a peer-reviewed manner for scientific analysis. Not just the United States, but worldwide.”