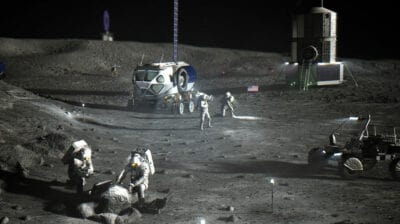 As NASA prepares to put American astronauts on the Moon in 2024, the organization must decide where it will place the Artemis base camp that will eventually house astronauts, rovers, scientific equipment and serve as a permanent settlement for future lunar missions. Though several locations are being considered, they are all near the lunar south pole.

BACKGROUND: What is the Artemis Mission?

Unlike previous lunar missions, the Artemis mission aims to make the Moon a permanent site for scientific study and a location to launch future missions to reach Mars.

According to NASA, there is a three-stage plan to explore and study more of the lunar surface and establish a permanent settlement. NASA will place a station in orbit around the Moon called Gateway, which will serve as a habitat for astronauts heading to and from the Moon. Eventually, NASA “will expand the Gateway’s capabilities, gain high confidence in commercial lunar landers departing from the Gateway, and establish the Artemis Base Camp at the South Pole of the Moon,” states the Artemis mission’s briefing document.

According to NASA, the ultimate goal is to bring about “a monumental shift that frees humanity from our innate bonds to Earth. This is the decade in which the Artemis Generation will teach us how to live on other worlds.”

Establishing real estate on the Moon is no simple task. The Artemis team must take the astronauts’ safety into account and ensure the future settlement can be self-sustaining.

NASA engineers must take two key site features into account before choosing a location; access to consistent sunlight for energy and the ability to locate water.

“The lunar south polar region is the target for the Artemis campaign. Because of the Moon’s small axial tilt, solar illumination conditions are very consistent near the poles,” Dr. Daniel Moriarty, a NASA research scientist working on the Artemis program, told The Debrief.

“In certain areas, usually high ground, the sun traces a path through the lunar sky low along the horizon, rather than rising and falling daily as it would closer to the equator.”

Temperatures on the Moon are extreme. They range from a boiling 127 degrees Celcius to a chilly -173 degrees Celcius, depending on where the sun is shining.

Dr. Moriarty explained that the south pole would solve any potential energy needs the lunar base camp would need. The camp would be powered by massive solar panels that would collect consistent sunlight. Temperature-wise, Dr. Moriarty told The Debrief that areas around the Moon’s south pole, due to constant illumination and its tilted axis, can be quite comfortable at a reasonably consistent -13 degrees Celcius.

“Because the Moon does not have an atmosphere, there is very little redistribution of heat. So illuminated areas get hot,” Dr. Moriarty explained. The southern lunar pole’s climate provides a stable area and temperature for astronauts and their gear to live and work in.

The problem is that water will be impossible to find in the illuminated areas. However, the southern pole is pockmarked with deep craters.

“Deep craters are in permanent shadow…[and these] shadowed areas can get extremely cold extremely quickly,” Dr. Moriarty stated. These craters help regulate temperatures at the south pole, so it doesn’t get too hot, but they also potentially solve the secondary problem; access to water.

“Permanently-shadowed regions are also considered to be good candidates to preserve water and other volatiles,” he emphasized.

A perfect site would rest in an illuminated area, yet near enough to deep craters where astronauts could harvest water and store volatile chemicals. Moreover, the terrain needs to be flat enough that landers and other vehicles don’t get damaged and can land far enough away from the base camp to ensure its safety.

There are also many other considerations, such as using natural landforms and topography to serve as natural barriers against contamination of scientific data or finding the best site to allow easy communication with Earth.

Dr. Moriarty admitted that finding the perfect location was still a work in progress.

OUTLOOK: Artemis Base Camp Will Change How We See Ourselves

The Artemis Mission, much like the Apollo, will undoubtedly shift our perception. If successful, humans will live on another world for the first time. Philosophical and cultural implications aside, we will genuinely reshape what it means to be a human being and whether our planet is the only place one can call home.

However, in the short term, the Artemis Mission will rekindle our innate desire to explore new frontiers. A few lucky members of our species will soon be sipping their morning coffees and staring out a window, looking out at an alien landscape.

“Astronauts are in for a really unique environment – a sweeping vista with extreme lighting angles,” Dr. Moriarty concluded. “‘Magnificent desolation’ indeed, as Buzz Aldrin so beautifully captured with his words.”