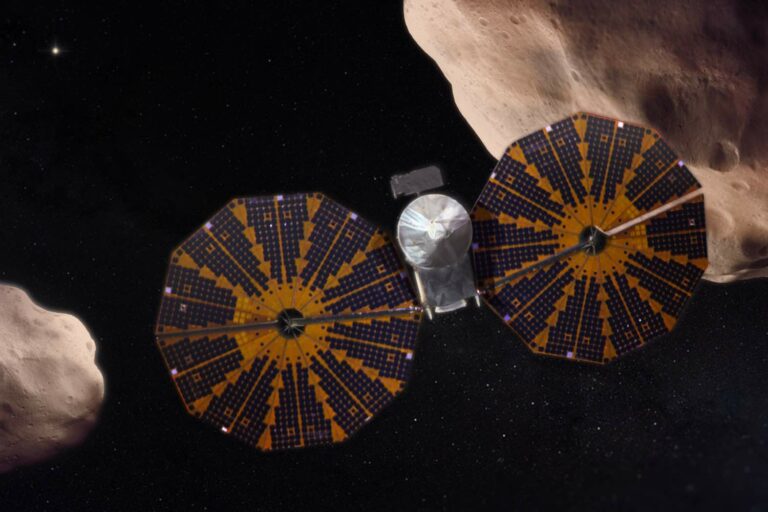 Lurking in orbit around our Sun and sharing a path with the largest planet in our solar system are two unique swarms of asteroids, which astronomers have now trained their sights on for future study.

Known as the Jupiter Trojans (or simply Trojans), these asteroids are unique for their shared orbital path with Jupiter. Although several other planets also possess Trojans, Jupiter’s pair of asteroid swarms are the best known, having a history extending back more than a century. The earliest discovery occurred in 1906 when German astronomer Max Wolf spotted 588 Achilles, and since then more than 9,800 similar co-orbital asteroids have been detected, though close to a million of the objects are expected to exist.

Now, NASA is preparing Lucy, a spacecraft whose mission will encompass the first study of Jupiter’s Trojans, for its forthcoming launch in mid-October.

Tom Statler, a Lucy project scientist with NASA based in Washington at the agency’s headquarters, recently talked about Lucy’s ambitious goals.

“With Lucy, we’re going to eight never-before-seen asteroids in 12 years with a single spacecraft,” Statler said in a NASA press release.

The Jupiter trojan asteroid swarms are typically comprised of dark asteroids possessing a mildly reddish coloration. Astronomers have been unable to confirm the presence of compounds like water on their surface, although organic polymers called tholins are expected to be found on their surface, which are the byproduct of long periods of exposure to the Sun’s radiation while in orbit.

Based on studies of their density, astronomers believe the Trojan swarms likely entered their orbits sometime early in the formation of our Solar System, which means they may be able to provide clues about planet formation and other occurrences in the early days of the planetary neighborhood.

Nearing Total War: The Latest on Russia’s Invasion of Ukraine

Earlier this summer, tests were conducted that gauged the spacecraft’s mechanical systems and other onboard capabilities, along with launch sequence tests that involved the program’s two mission operation centers, located at Lockheed Martin Space in Littleton, Colorado, and Kennedy Space Center in Orlando, Florida. Later in August, Lucy’s communication systems were also tested before nearly 1,600 pounds of fuel were loaded onto the spacecraft. Additionally, there are three primary instruments onboard Lucy that include an optical and near-infrared imaging spectrometer, as well as a thermal spectrometer and a high-res imager.

Once it launches in October aboard a United Launch Alliance Atlas V, Lucy will receive a pair of gravity assists before it proceeds toward asteroid 52246 Donaldjohanson, a main-belt asteroid whose name shares a unique relationship with the mission, as it is named for the discoverer of Lucy, a 3.2 million-year-old hominin fossil discovered in Ethiopia in 1974 from which NASA’s spacecraft draws its own name. After its rendezvous with the asteroid in 2024, Lucy will make its arrival at the L4 Trojan cloud in 2027, where its observation of four of the Jupiter Trojan asteroids will ensue. Following these observations, in 2031 Lucy will return to Earth for another gravity assist before heading on to fly by the binary Trojan 617 Patroclus and its satellite, Menoetius two years later.

If all goes according to plan, the first attempted launch is scheduled to occur at 5:34 a.m. on October 16. Launch teams will arrive on duty more than four hours beforehand, and work through the night to ensure that all systems are prepared for the early morning takeoff. Like other asteroid missions NASA has underway, Lucy’s journey is expected to reveal unique data about Trojan asteroid groups around Jupiter and other planets, as well as the formation processes that led to their creation billions of years ago.

“This is a fantastic opportunity for discovery as we probe into our solar system’s distant past,” Tom Statler was quoted saying of Lucy’s forthcoming mission, which in the years ahead may provide new insights for astronomers about the early development of our Solar System.