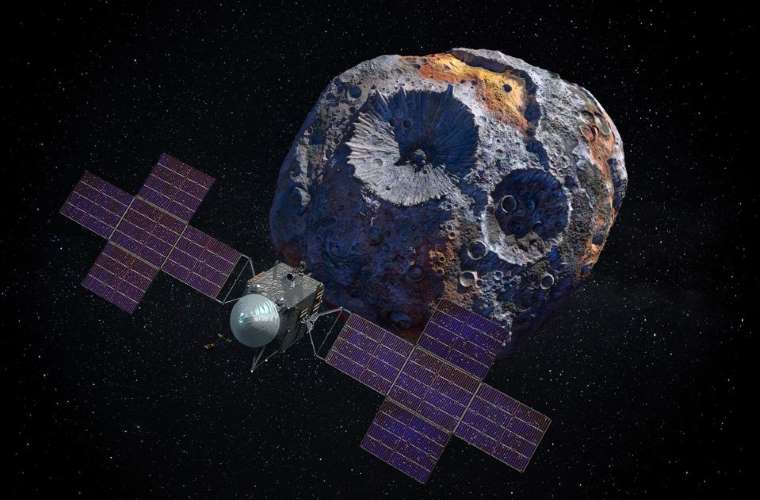 Less than a year from its scheduled launch, the National Aeronautics & Space Administration (NASA) has released a stunning video animation of their upcoming mission to an asteroid over 370 million miles from Earth. Named Psyche 16, the mostly metallic space rock, which may even be the core of a failed planet, has gained attention for its mineral value, something Bloomberg recently projected at $700 quintillion.

“We have all been watching the spacecraft come together on the floor of the clean room,” said NASA Jet Propulsion Laboratory (JPL) researcher, and the mission’s project manager, Henry Stone. “It’s tremendously exciting after all the years of hard work designing the system, and building and testing its myriad of components.”

Stone and the rest of the mission team are expected to complete construction and testing of the spacecraft by sometime next spring, including a shake table test (which is exactly what it sounds like) and a vacuum chamber test designed to simulate the deep space environment. Assuming those tests are successful, the fully assembled deep space probe will be shipped to the Kennedy Space Center in Florida for its launch, which is currently planned for on or after August 1st, 2022.

Once it has left Earth orbit, the Psyche spacecraft, which shares a name with its target asteroid, is expected to spend over three years crossing the vastness of space before arriving at its destination sometime in early 2026.

“It’s incredible to be at this point now, with a big spacecraft coming together and one year until launch,” said Arizona State University’s Lindy Elkins-Tanton, a principal investigator on the Psyche team, on the agency’s mission page. “Like everyone in the world, our team has faced many challenges of the COVID pandemic, and we are putting in maximum effort to make it to the finish line. I’m so proud of this incredible group of people!”

Due to the vast distances to be traveled, Psyche won’t be propelled by a chemical rocket, like nearly all orbital satellites, but instead will use a super-efficient electric propulsion system developed by Maxar Technologies.

After arriving at its destination, Psyche will spend 21 months in orbit around its namesake asteroid, scanning it with a suite of precision instruments: a magnetometer, a multispectral imager, and a gamma-ray and neutron spectrometer. Psyche will also test a new laser communications technology called Deep Space Optical Communications (DSOC). That system uses lasers to improve communications across such vast distances, hoping to pave the way for live stream videos of future missions.

When watching the nearly two and a half minute movie-quality video, it is easy to see why Elkins-Tanton, Stone, and the rest of the Psyche team are feeling such excitement and anticipation, especially with less than a year until launch.

“The pressure is now on to complete assembly and test of the vehicle prior to shipment to Cape Canaveral in less than a year,” said Stone. “It’s both exhilarating and stressful for all involved, but I have total confidence in this team’s ability to get the job done in time for our launch. Go, Psyche!”