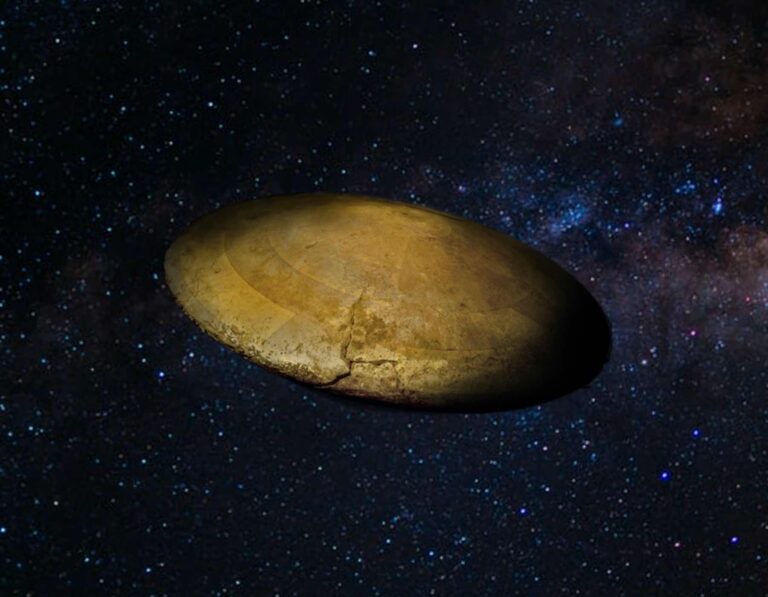 ‘Oumuamua Not an Alien Spaceship, Likely a Piece of an Exoplanet, New Study Says

Over 3 years since it was observed passing through our solar system, the mysterious interstellar object ‘Oumuamua has been a point of contention, debate, and controversy.

Not consistent with being an asteroid or comet, multiple theories have been put forward, including at least one notable Harvard astronomer who emphatically claims ‘Oumuamua could have been an artificial extraterrestrial object.

Yet, now, two scientists from the University of Arizona believe they have solved the mystery behind ‘Oumuamua.

In a pair of papers published in the Journal of Geophysical Research: Planets,  astrophysicists Dr. Alan Jackson and Dr. Steven Desch say ‘Oumuamua was likely a broken off chunk of a distant Pluto-like exoplanet.

“This research is exciting in that we’ve probably resolved the mystery of what ‘Oumuamua is and we can reasonably identify it as a chunk of an ‘exo-Pluto,’ a Pluto-like planet in another solar system,” said Dr. Desch, co-author of the new study, in a press release issued by Arizona State University. “Until now, we’ve had no way to know if other solar systems have Pluto-like planets, but now we have seen a chunk of one pass by Earth.”

First detected on October 19, 2017, by University of Hawaii astronomer Robert Weryk and the Pan-STARRS1 telescope, analysis of ‘Oumuamua’s trajectory has confirmed it to be the  first ever interstellar object observed passing through our solar system. This much has been universally accepted within the scientific community. However, what exactly ‘Oumuamua is, has remained elusive.

‘Oumuamua’s unusual elongated shape and observed behavior as it passed by the sun doesn’t quite fit known models for it being a comet or asteroid. One theory that has been proposed is that ‘Oumuamua could have been a “cosmic dust bunny.”

By comparing the shape of the unusual space object to a large, stony interstellar cookie, a pair of astrophysicists at Arizona State University say new analysis indicates that ‘Oumuamua is likely to be composed of frozen nitrogen, comparable to the Neptunian moon Triton, as well as the distant dwarf planet Pluto.

Regarding the odd elongated flat shape of ‘Oumuamua, “As the outer layers of nitrogen ice evaporated, the shape of the body would have become progressively more flattened, just like a bar of soap does as the outer layers get rubbed off through use,” explained Jackson in the release.

Researchers say other unusual characteristics of ‘Oumuamua, namely its lack of a detectable comet tail, high-reflectivity, and deviation in course as it passed the sun can all be accounted for if it was composed of frozen hydrogen.

“That was an exciting moment for us,” Desch said in the release. “We realized that a chunk of ice would be much more reflective than people were assuming, which meant it could be smaller. The same rocket effect would then give ‘Oumuamua a bigger push, bigger than comets usually experience.”

The pair of astrophysicists were able to conclude that a chunk of solid nitrogen ice, exactly like is what is seen on the surface of Pluto, would simultaneously account for all of ‘Oumuamua’s features.

Desch and Jackson also calculated the rate of frequency at which chunks of solid nitrogen ice would have been knocked off of surfaces of Pluto or similar bodies and the probability that interstellar chunks of solid nitrogen ice would reach our solar system. Again, all the data lined up and further supported that ‘Oumuamua was most likely hydrogen ice debris ripped from a distant exoplanet.

“‘Oumuamua likely wasn’t flat when it entered our solar system, but melted away to a sliver, losing more than 95% of its mass, during its close encounter with the Sun,” says Jackson.

Based on ‘Oumuamua’s hyperbolic velocity, which was a bit lower than expected, researchers believe it was likely knocked off and has been traveling the cosmos for over a billion years.

So It’s Not An Alien Spaceship?

Some more exotic ideas have been previously put forward about ‘Oumuamua’s nature and origin.

In 2018, the then-chair of Harvard’s Astronomy Department, Dr. Avi Loeb, co-authored a paper suggesting the interstellar visitor could have been an artificial extraterrestrial object.

Since first making the suggestion, Loeb has doubled down on his belief that ‘Oumuamua could have possibly been an extraterrestrial probe or solar sail, advancing it further in the recently released book: Extraterrestrial: The First Sign of Intelligent Life Beyond Earth.

Loeb disputes Desch and Jackson’s recent conclusions, suggesting that if there are advanced extraterrestrial civilizations in our universe, there might also be an abundance of different varieties of probes they have produced drifting around in space.

“Regarding their purpose, it is unclear whether the most abundant probes in interstellar space might be just space junk,” Loeb told The Debrief, “or devices intended to collect or relay information; or platforms carrying 3-D printers which are aiming to produce more probes, or even life, out of the raw materials on distant planets.”

“If we ever get our hands on an advanced probe from billion-year-old technology, it would look like magic to us,” Loeb told The Debrief in January, “just like a cell phone would look to a caveman.”

“It’s important in science not to jump to conclusions,” said Desch, while noting that researchers did not overlook the possibility that ‘Oumuamua could have been an object of extraterrestrial origin. “Everybody is interested in aliens and it was inevitable that this first object outside the solar system would make people think of aliens.”

Even if ‘Oumuamua had been an artifact of some extraterrestrial civilization—present, or past—it would be difficult to prove it since the object is currently on its way toward interstellar space, moving at nearly 500 million miles per year—roughly twice the speed of Voyager 1, which remains the fastest spacecraft to date. At its current rate, ‘Oumuamua will likely reach interstellar space by the late 2030s.

Astronomers using the most advanced telescopes available today still would not be able to spot ‘Oumuamua at its present distance—roughly 2 billion miles—which places further from Earth than Uranus.

Desch and Jackson plan to follow up their paper with a new study that will examine instabilities in the orbits of giant planets, similar to orbital phenomena that occurred in our own solar system billions of years ago, which the authors believe would have been capable of throwing out “large numbers of small pieces of nitrogen ice like ‘Oumuamua.

“Oumuamua may be the first piece of an exoplanet brought to us,” the astronomers say.

Desch and Jackson’s paper was published on March 16, 2021, in the Journal of Geophysical Research: Planets.