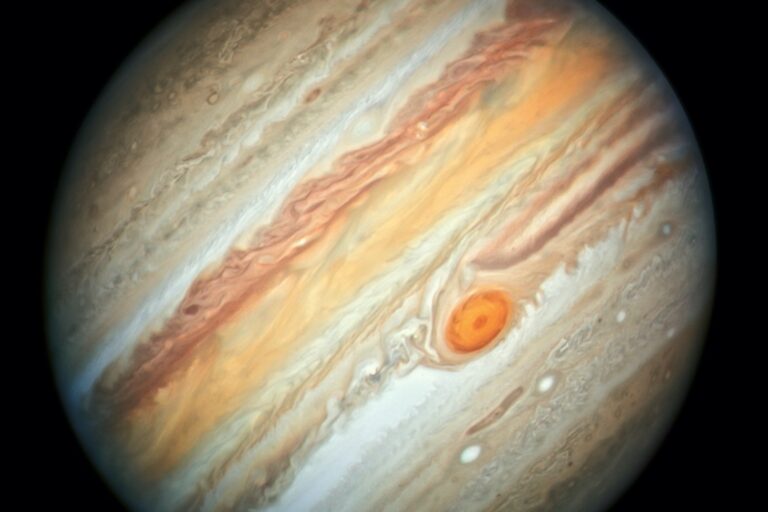 In an astronomical first, a team of researchers have succeeded in obtaining measurements of the winds in Jupiter’s middle atmosphere. The astronomers were able to perform the measurements with the aid of the Atacama Large Millimeter/submillimeter Array (ALMA).

The team of researchers, led by Thibault Cavalié of the Paris Observatory’s Laboratory for Space Science and Astrophysical Instrumentation (LESIA), were able to obtain the measurements as a result of studying the aftermath of a comet that collided with the massive planet in the 1990s.

According to the Cavalié and the study’s authors, “We directly detect, for the first time, strong winds in Jupiter’s stratosphere. They are zonal at low-to-mid latitudes and nonzonal at polar latitudes. The wind system found at polar latitudes may help increase the efficiency of chemical complexification by confining the photochemical products in a region of large energetic electron precipitation.”

When space objects like comets collide with a planet, a variety of unique elements that they carry along with them are often dispersed as particulate into the atmosphere. Geologists, with the help of unusual abundances of rare Earth elements like iridium that appear in certain stratigraphic layers, have been able to determine likely periods of Earth’s ancient history when such impacts have occurred. Similarly, when comet Shoemaker–Levy 9 struck Jupiter back in 1994, it brought with it a variety of new molecules which are still observable in Jupiter’s atmosphere.

Our solar system’s largest gas giant, the atmosphere on Jupiter is primarily composed of hydrogen and helium, much like our Sun. Since the collision that occurred decades ago, the molecules introduced into the Jovian atmosphere have continued to move with the winds passing above the planet, and can still be observed from Earth today.

According to the study’s authors, one of their greatest hurdles had been accurately measuring Doppler shifts that resulted from winds related to the rotation of Jupiter. “To overcome this challenge,” the study reads, “we use the strong millimeter lines of HCN and CO, two species delivered by the impacts of comet SL9 in 1994.”

HCN, or Hydrogen Cyanide, was of specific importance during the study, because observing it allowed the team to conduct direct measurements of what the team refers to as stratospheric “jets” on Jupiter, which describes thin corridors in Jupiter’s atmosphere where winds similar to Earth’s jet streams were present.

According to lead author Cavalié, jets capable of producing wind speeds nearing 400 meters per second were observed beneath the circular bands of aurorae that manifest near Jupiter’s poles, making these Jovian phenomena among the most impressive observed by astronomers.

One particular observation that surprised Cavalié and his team were the presence of strong jets with speeds of up to 1400 kilometers per hour, which were observed near the planet’s poles. This makes them about double the strongest winds that occur in the area known as Jupiter’s Great Red Spot, a massive storm on the surface of Jupiter twice the diameter of Earth, making it large enough to be seen through most telescopes during ideal visible conditions. Astronomers believe the storm, which has been raging for centuries, may have begun to slow down in recent years.

The jets observed near Jupiter’s poles may essentially function like a huge vortex that is even larger than the Great Red Spot—nearly twice as much—which Cavalié calls “a unique meteorological beast in our Solar System.”

In past studies conducted by Cavalié and his colleagues via the ESA’s Herschel Space Observatory, astronomers mapped the prevalence of water on Jupiter, which indicated an asymmetrical distribution of water between the planet’s northern and southern regions, with the greatest abundance gathering toward the south. According to their observations, as much as 95% of the water currently observed on Jupiter is likely to have been brought to the planet during its 1994 collision with Shoemaker–Levy 9.

The recent research by Cavalié, et al, titled “First direct measurement of auroral and equatorial jets in the stratosphere of Jupiter,” appeared in the March 2021 issue of Astronomy & Astrophysics.